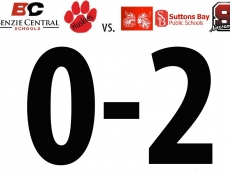 0-1 at halftime. 0-2 at end of game. It had been snowing for about an hour before our warm-ups even started.

This was the sixth game of the 2015 season for the Benzie Central Girls Varsity Soccer team, and the team’s third away game.

However, the second half was pretty rough, with girls going unmarked in the back and the midfields not able to transition the ball up to our forwards. Another goal was scored with about 10 minutes left in the second half, and most of our offensive plays had dwindled by that point.

Coaches Scott Kubit and Aubrey Ann Parker are hoping that we can chalk up the disorientation and disorganization of this game (particularly the second half) to the weather.

Note: We were missing Peyton Campbell and Brenna Harm for this game and the last one on Monday against Northport, as they are in Washington D.C. for Close-Up. Wendy Papineau (Haley’s mom) brought bananas for halftime snack. Martha Papineau (Amanda’s host mother) brought trailmix. We also had leftover crackers and veggies from Monday’s game.