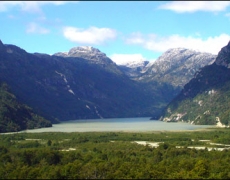 In Chile’s trackless mountain wilderness, a clash between pristine rivers and hydropower prospects.

The hydropower potential of Patagonia in Chile has attracted growing interest from multinational corporations. Pictured above is a view from Patagonia’s “Valley of the Explorers,” located at the terminal moraine of the Expolaradores Glacier.

High in Chile’s Andes Mountains, glacier-fed rivers tumble down knife-edge slopes in a froth of swift water barreling through tight canyons. Chile already produces more than 40 percent of its electricity from hydropower, but how much further Chile is prepared to advance its alternative energy industry—especially the hydropower sector—is now a question that has come to rest uneasily along the rocky banks of the Pascua and Baker rivers, two of the most remote and cleanest rivers in the world.

Both rivers are viewed by the multinational company HidroAysén as the fuel for its $US 5 billion project, which includes the construction of five large dams—some higher than 100 meters—to hold back enough water to power 2,750 megawatts of electricity, the equivalent to three mid-sized nuclear power stations. Additionally, more than 20 percent of the country’s electricity would depend on these dams, located on glacial rivers which some scientists fear are threatened by climate change.

Aubrey Ann Parker is a reporter for Circle of Blue. This article is based on two weeks of extensive research in hydropower that Parker conducted through the Graham Scholars Program at the University of Michigan in the spring of 2009. Read the Graham Scholars’ complete critique of the HidroAysén Environmental Impact Assessment here.