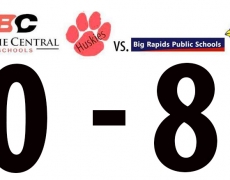 This was the first game of the 2019 season for the Benzie Central Girls Varsity Soccer team. We were a little confused about where this game was to be played: at first, we were supposed to play at home, but our soccer field still had snow, so then the game was moved to Big Rapids High School, but the extensive rain on Thursday night meant that their field was flooded (it has drainage problems), so we got to play on the turf at Ferris State University, which was a neat experience for the girls!

Big Rapids was the District Champion team last year for our district, and they actually made it to the Regional Final game; this year, they were very strong, again. Before the game, the assistant coach told me that many of the Big Rapids girls play club soccer in the off-season, and they had already had two scrimmages and two games prior to our game against them. (Meanwhile, we’d had three practices outside and only one scrimmage so far before this game.)

But, as I told the girls, I wanted us to play Big Rapids this year, so that we can see where we want to be by the end of the season — able to hang with that team, or a team like them, in districts. I hope that this message came across, and that the girls don’t let the score bother them, too much: it’s still very early in the season, and we’re just starting to figure things out…

The first goal was scored by Big Rapids senior Selena Wright (#8) at about a minute and a half into the game. She received a pass from junior Linda Simula (#9), who had a breakaway down the field. The next goal came about four minutes later, when Simula (#9) scored on a cross to the right-hand corner of the six-yard box from #19. Four minutes later, the third goal was scored by Wright (#8), who received a pass from (#5).

We then held the Cardinals off for the next 22 minutes of play, but we very obviously got tired in the last 10 minutes of the first half — we are not yet used to playing 40 minutes of continuous soccer. (We’ll be doing a lot of conditioning this week in practice, but getting in “game shape” will come as we play more games.) At this point, Wright (#8) scored her third goal on a trash goal with 8 minutes left in the first half, after the ball bobbled around a lot in front of the net. Only 20 seconds later, senior Leah Alley (#17) dribbled the ball up the field for about 20 yards by herself and scored unassisted from the right-side of the 18-yard box. Two minutes later, Wright (#8) scored again, this time on a header via a cross from (#10).

Had these three goals not occurred when we got tired, we would have finished the half 0-3, but instead it was 0-6.

Alley (17) scored her second goal of the game about 5 minutes into the second half: she dribbled into the 12-yard line and shot from the center. Three minutes later, with 31 minutes left in the game, she scored her third goal (called a “hat trick,” like in hockey), which meant the end of the game: when two teams reach an eight-point difference in the second half, there is a “mercy” rule of ending the game.

Meanwhile, our Benzie girls had zero shots during the game. During the first half, our goalkeeper Jenna Cole had 16 saves; since the second half was so much shorter, she only had two saves.

We are still figuring out positioning, having lost some key players from last year’s team. For instance, we have been able to fill most of our defensive holes, but we are struggling in the midfield to move the ball up the field and to get back and mark up on defense. Over the course of the next few games, we will be playing around with positions until we get our girls into the best fit, which is normal.

Overall, the Benzie girls played decently, given that this was the first 80-minute showing of the year. (We were missing Isabel Pataky, who had a band concert, and Rachel Vanhoorne, who is still sitting from Tuesday’s injury.)

The Big Rapids Pioneer‘s website featured stats from the game, which you can see here.