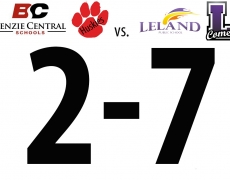 This was the sixth game of the 2016 season and the fifth away game for the Benzie Central Girls Varsity Soccer team.

The Lady Huskies took only four shots in the second half (two shots by Haley Papineau, one shot by Tylor Kistler, and one shot by Hanna Burch), two of which they scored on. Haley scored at 28 minutes into the game with an assist from Hanna, and Hanna then scored with only five minutes left in the game, which put us a at a final of 2-7 for the night. Benzie goalkeeper Maile Church made 29 saves out of 36 shots on her, compared with the Leland keeper who had 2 saves out of 4 shots.

Note: Libby Munoz is Leland’s “ringer,” and she scored 4 goals plus she had an assist — if you take her out of the game (she is graduating this year, and she is currently only 7 goals away from tying Michigan’s total goals record), then it was more like a tie game.

We were missing: Fenja Firnhaber (injured), Ayla Breuker (sick), Coach Aubrey Ann Parker (she attended the superintendent interviews instead). We had four subs, which was nice compared with only two subs, which we’ve gotten used to lately. This was the first game that Brenna Harm could play in, after being suspended for the first five games. Sarah Middleton brought grapes as a snack, and Myah Clous brought granola bars.