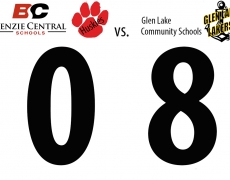 This was the first game of the 2016 season for the Benzie Central Girls Varsity Soccer team. We played a scrimmage three weeks ago at Suttons Bay, but our first two games — Friday, April 8, at home against Kalkaska and Monday, April 11, away against Leland — were canceled because there was snow on the both fields. In fact, this was also only the fifth time that our girls have been able to play outside on a real soccer field so far this season.

There were 18 shots on our goalkeeper Maile Church during the first half, and Glen Lake was able to score on five of those opportunities. All but one were defensive errors, rather than goalie errors; we need to learn not to dive in at the 45-yard line and to jockey back instead. We also need to learn to mark up better on our defensive half and move as a unit.

The Huskies played a better second half, despite getting very tired (we only had two substitutes for the first half, and then only one in the second half), with 13 total shots on Maile but only three going in. The last goal went in with only 30 seconds left in the game, which meant that we were mercied. (By contrast, however, exactly one year ago today, we were mercied by Glen Lake only 15 minutes into the second half, so we fared better this year against them! Also, it seems appropriate to note that more than half of Glen Lake’s girls play soccer in the off-season, so they are coming into spring a lot more seasoned than our girls who have not played in at least a year.)

Overall, the team played pretty well. Glen Lake is a team that consistently is within the top three teams in the state for their division, so our Benzie girls should be pretty proud of how we played.

We were missing: Jenna Saier (sick), Brenna Harm (suspended for the first five games), Ayla Brauker (needs 10 practices before she is allowed to play in a game), Hanna Burch (chronically injured from pre-season), and Sydney Ghering had to sit out about 10 minutes into the second half for an injury sustained during this game. We had no snacks at the game; Coach Aubrey Ann Parker is going to try to recruit more parents to start bringing snacks.

Click this link to compare this year’s game to last year’s game, which also took place on April 13, but was at home against Glen Lake and was our third game of the year: the score was also 0-8.