So proud of our Benzie Central Girls Varsity Soccer team — they’re building community and having fun at the same time!

This season, the girls have opted to order sleek new warm-up jackets and pants, since the ones that are provided by the school are pretty old and janky. These are going to cost about $75 total.

Because the girls are paying for the warm-ups, they will get to keep them when the season is over. And since $75 is a lot of money to come out of the pocket of a high school girl, we tried to come up with various ways that the girls could raise funds to offset the costs. A bit of the money will get thrown into the general BCHS Girls Varsity Soccer pool to cover various expenses that we incur (ripped jerseys, etc.), but the rest will go directly toward each girl’s purchase of these warm-ups. This means that hopefully the girls will only end up paying about $10 or less for the warm-ups, which is a great deal.

When coming up with fundraising ideas, there was the old stand-by: Subway Cards. Benzie Central apparently has a long history of fundraising in conjunction with the Subway at Stapleton’s in Benzonia. (I think they were even doing it when I was there more than 10 years ago!) So the girls were each given ten $10 Subway cards that are each good for ten “buy one get one free” deals at the Stapleton’s Subway. (However, Coach Kubit says that these cards have worked at other Subways, too, so it’s always worth asking at any Subway — the worst they can do is say no! For instance, they have worked in Suttons Bay, down by Oakland University, in Lansing, etc.) Half of the money comes back to our program, and Subway takes the other half. In other words, if each girl sells her ten cards, that is $50 to offset the cost of her warm-ups. But that still means that about $25 is coming out of pocket, though.

I texted my friends and family in Benzie County and asked if anyone needed help with yard work or other spring-cleaning tasks; I was delighted when more than 10 people responded that they would be willing to pay the soccer program for some help! For the last two weeks or so, I’ve been working with the girls to schedule a few Saturdays and/or Sundays that they can pair up with others on the team to do work for people from Interlochen to Frankfort. Most of it is raking, but some is gardening, or fence-painting, or even a random job putting in some docking on Crystal Lake.

We’re getting paid a rate of about $5-$25 per hour per girl, depending on the project. By having each girl work just two or three shifts on the weekends, I think we can easily raise more than $1,500 for our program! If so, this will more than cover the cost of the warm-ups, so maybe the girls can get new bags, too, since the ones that they have now are in bad disrepair. Or maybe the money will go toward healthy snacks for their halftimes (currently the parents are taking turns bringing snacks). Or maybe we could start a scholarship fund to send a couple of the girls to play travel soccer… the possibilities really are quite open-ended!

The other things that I like about this fundraiser:

All great things! This is meant to be fun and a team-bonding experience, as well as a fundraiser. Depending on how it goes, I’m hoping this can become a good model that I can use with the BCHS Co-Ed Middle School Soccer Team, also — or perhaps it’s something that even more Benzie Central teams can start to do! Wouldn’t it be *wonderful* to get our student-athletes more involved with a more diverse group of our community through active and engaging outdoor community service work?! I sure think so!

Our first work bee was on Saturday, April 18, from 8-11AM at Grow Benzie (5885 Frankfort Highway/M115 between Benzonia and Frankfort). When I asked the girls if they had heard of or been to Grow Benzie, most had not in both categories. (Again, we’re introducing them to parts of the community that they hadn’t previously been exposed to — all good things!)

For those of you out there in Reader Land who don’t know, Grow Benzie is…

“a community non-profit farmstead, dedicated to enriching the lives of Benzie County residents by fostering self-reliance through education in agriculture, nutrition, job-training, and life skills… [Grow Benzie’s] role in the community is to help in areas that are under-served — health and education, two of the most important investments into family well-being with both having a strong impact on income as well — [and the organization’s] goals are to improve nutrition and healthy diets, increase capacity of low-income residents to grow their own food, and improve the economic strength of low-income families through job skills and income-generating activities in agricultural industries.”

Grow Benzie is a non-profit 501(c)3 that was established in September 2008, when a 3.7-acre piece of abandoned farmland was purchased by community members who were looking for a site for community gardens. But the site ended up offering so much more than just garden space — the property has a 5,000-square-foot building with a community incubator-kitchen space and tons of seating that can be rented out for events, as well as a 3,200-square-foot house with offices and spaces for community programs like sewing and knitting; there is a large pole barn and three industrial-sized greenhouses; its location is perfectly situated for access from the two major population centers in our county (Frankfort and Benzonia) on a state highway with high visibility; and the Benzie Bus runs by several times a day, making the site easily accessible to every resident. There are community events happening at Grow Benzie all year long, as well as a farmers’ market on Monday evenings throughout the summer and fall. (Not to mention that they have a presence at other farmers’ markets in the region; more than 4,000 pounds of tomatoes are grown there each year, and you can buy them!)

Bonnie Smith, the president of the Grow Benzie board, agreed to pay $300 for a total of 60 hours of work that our girls will perform. For our first work bee, we had 13 girls — Allana, Allie, Amanda, Haley, Hannah, Julie, Katie, Majida, Megan, Molly, Peyton, Sara, Sarah — plus me and our manager, Devon, for three hours on Saturday, so that made up about 40 of our total hours. (If the math doesn’t seem to add up, it’s because a few girls couldn’t work the entire time and had to leave early.)

To my surprise, the girls opted to get up and at ’em early, so we arrived at 8AM. Josh Stoltz, the new executive director of Grow Benzie, and his sweetie pie of a dog, Moonshine, met us there, and the first half hour or so was actually spent taking a tour of the facilities and telling the girls about all of the cool things that Grow Benzie does. (Again, all good things!) We spent the next 2.5 hours raking; pulling rocks out of the community garden beds; raking; pulling weeds out of some garden beds; raking; moving and laying down wood chips; oh yeah, and more raking. By the time we left, there still was work to be done (so we’ll be going back at a later date, to be determined), but we had made a HUGE DENT in the groundskeeping. This is a huge help to Grow Benzie, Josh told us, because now they can get right to work on the more important tasks that they have to do. We’re happy to have been of service!

Thanks so much to Bonnie, Josh, Moonshine, and Grow Benzie for having us! And thanks to the girls who did such a great job working yesterday morning. Onward to more community-service projects as the weeks progress.

Here are some photos from yesterday morning — enjoy! 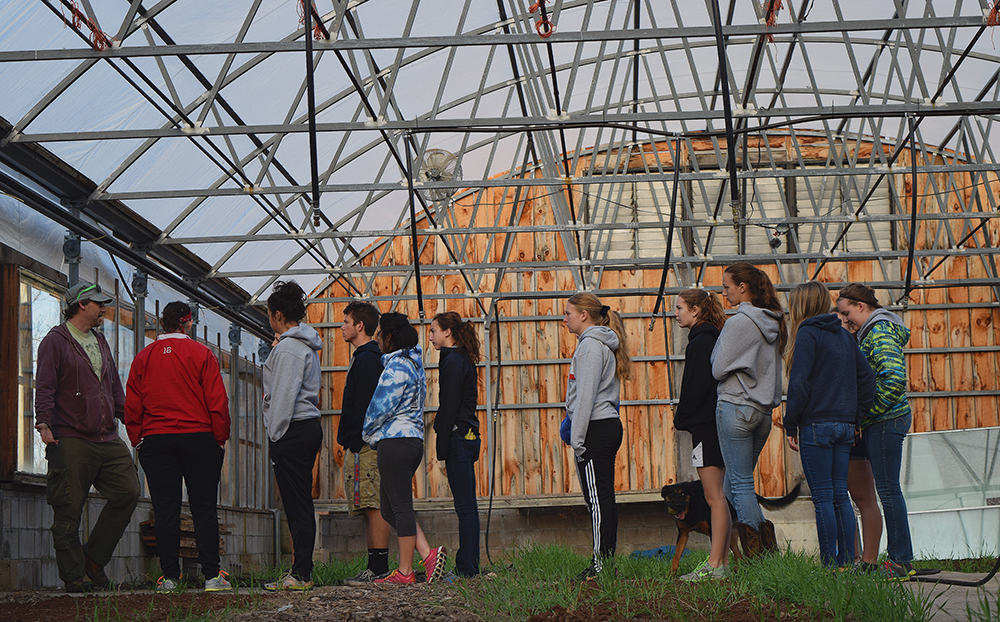 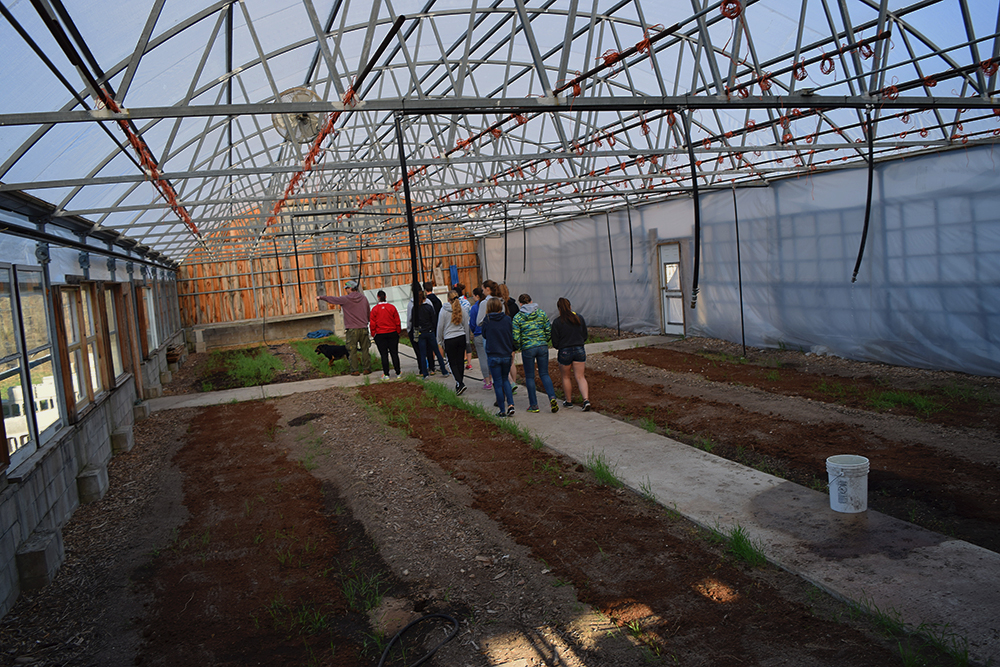 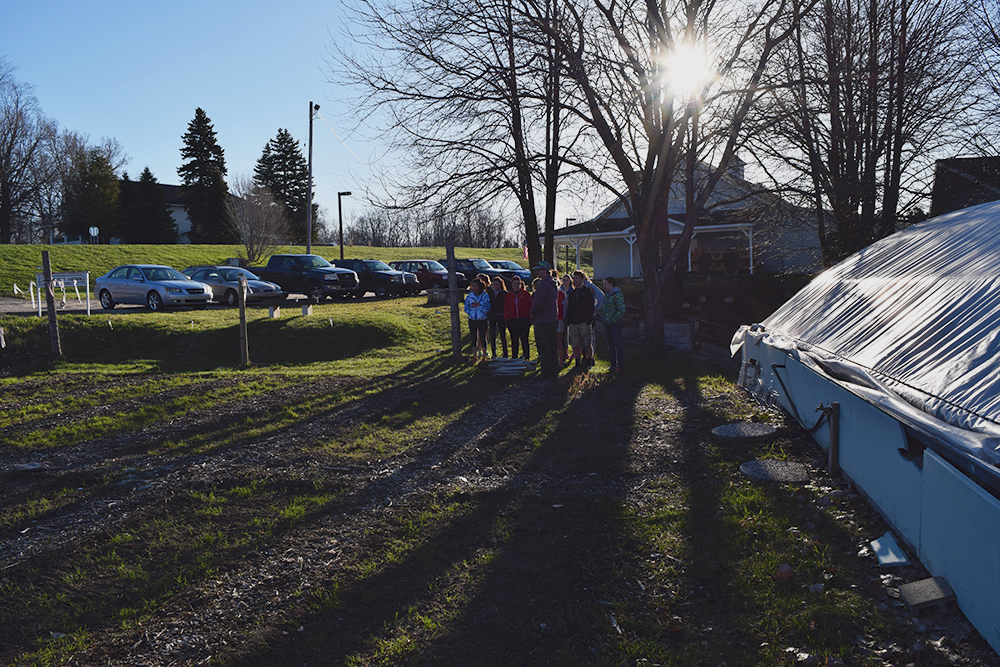 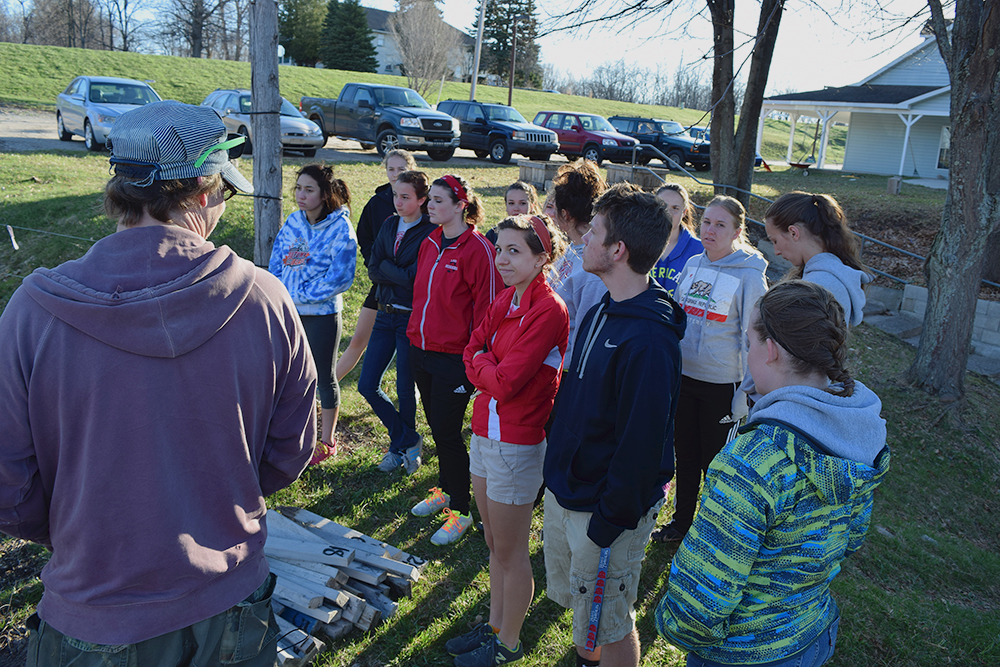 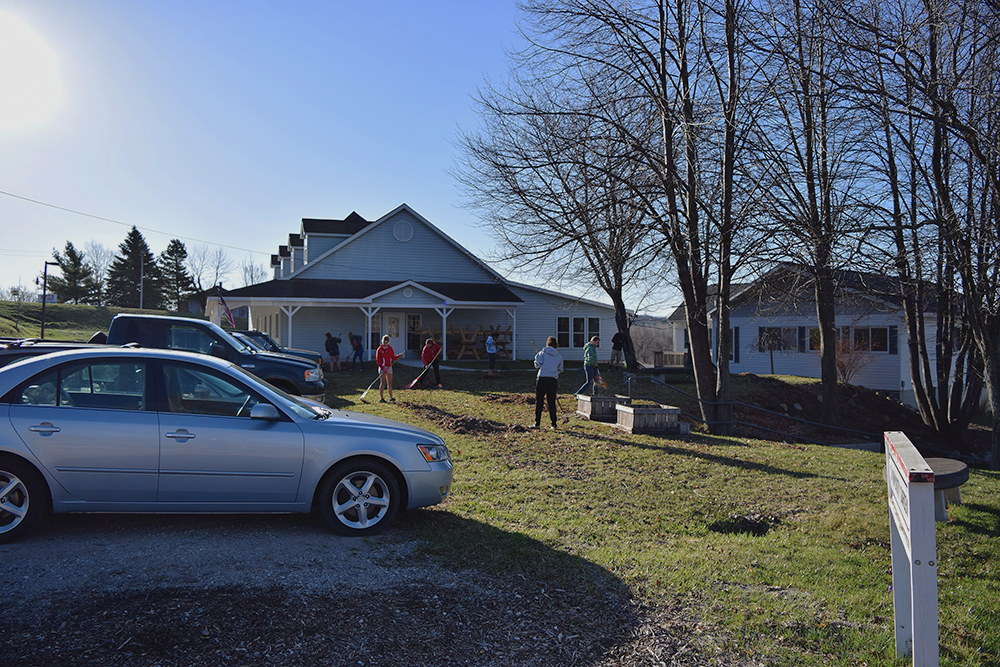 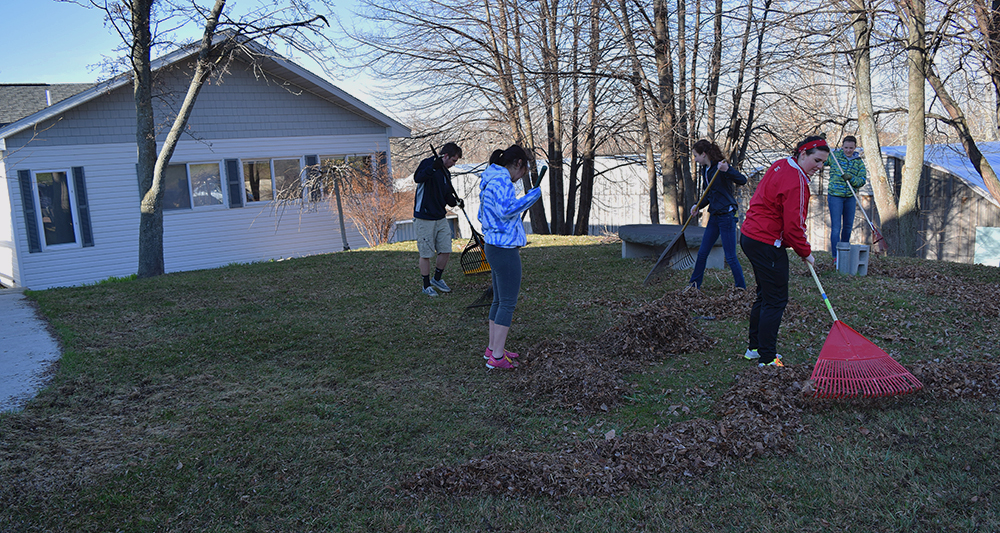 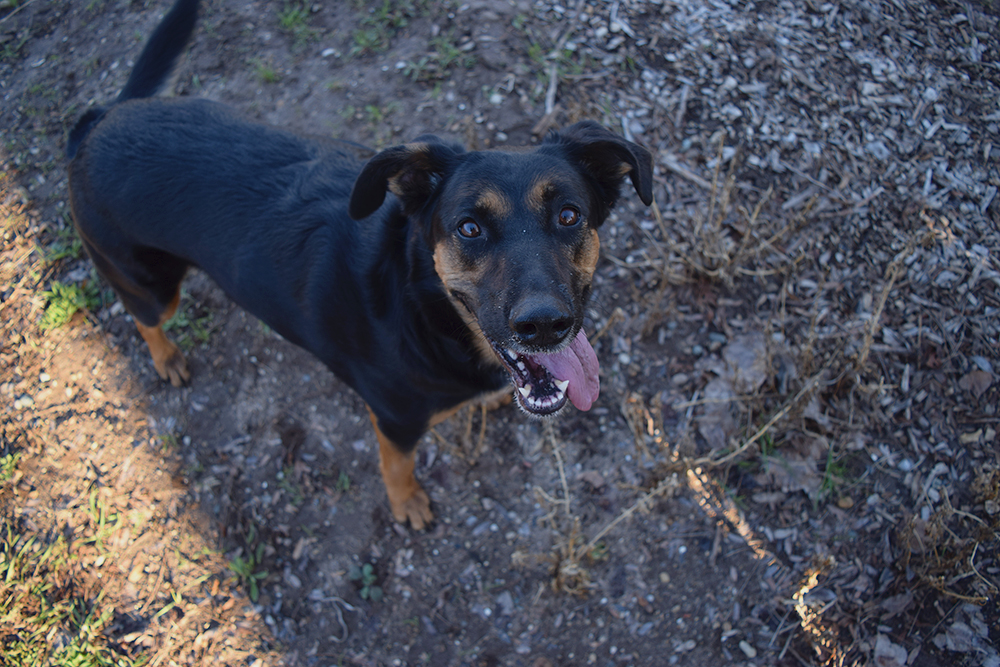 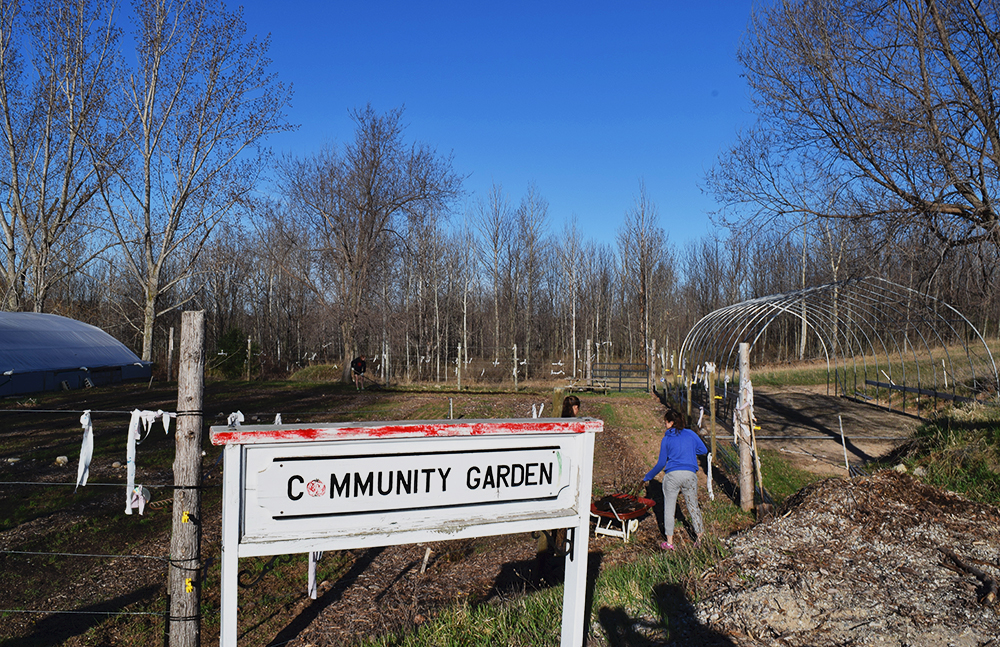 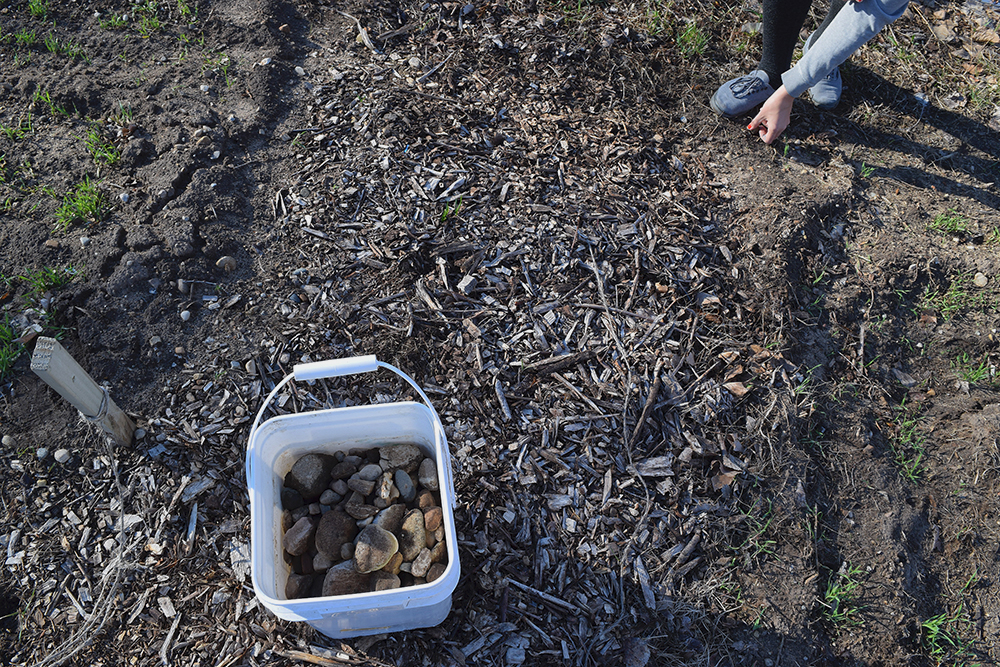 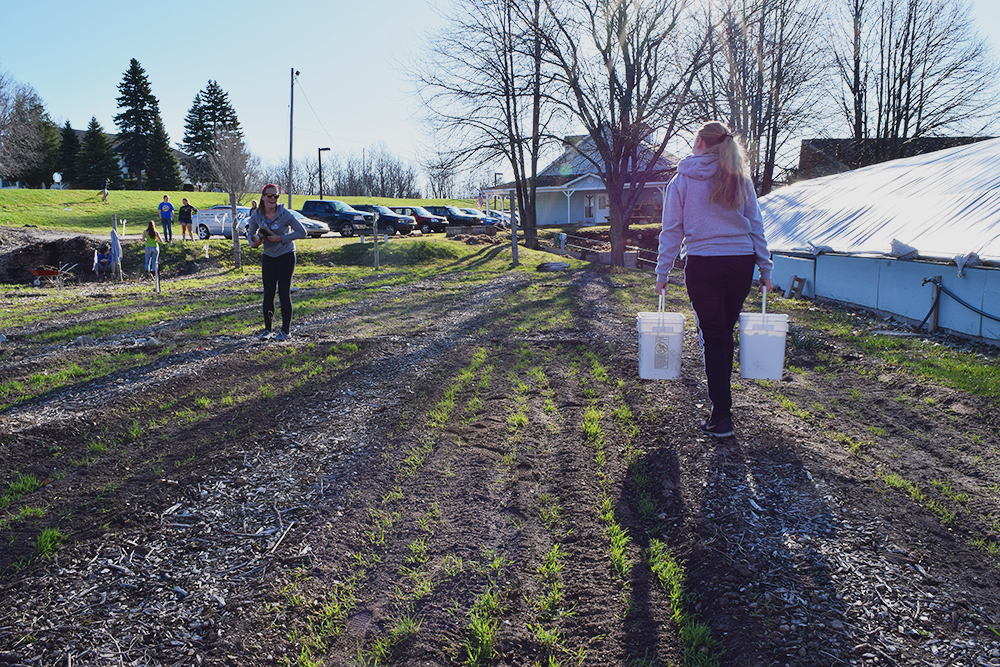 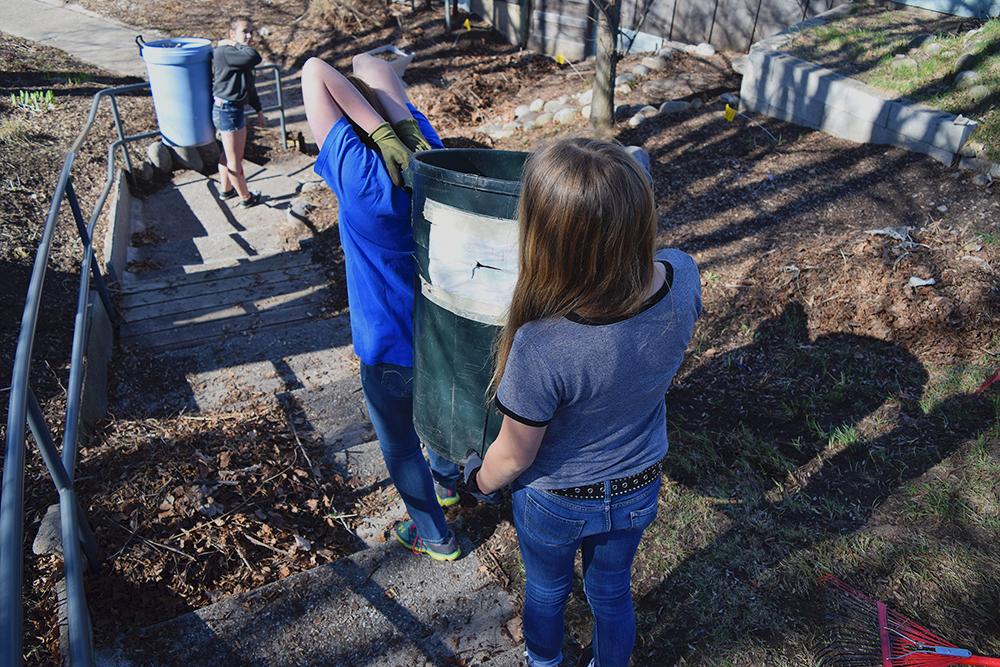 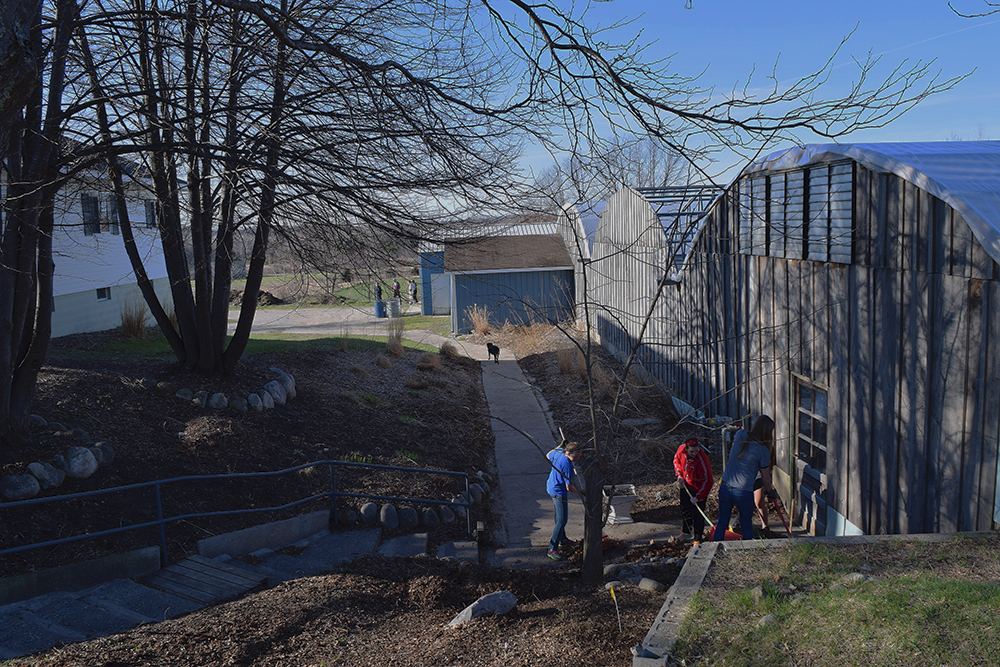 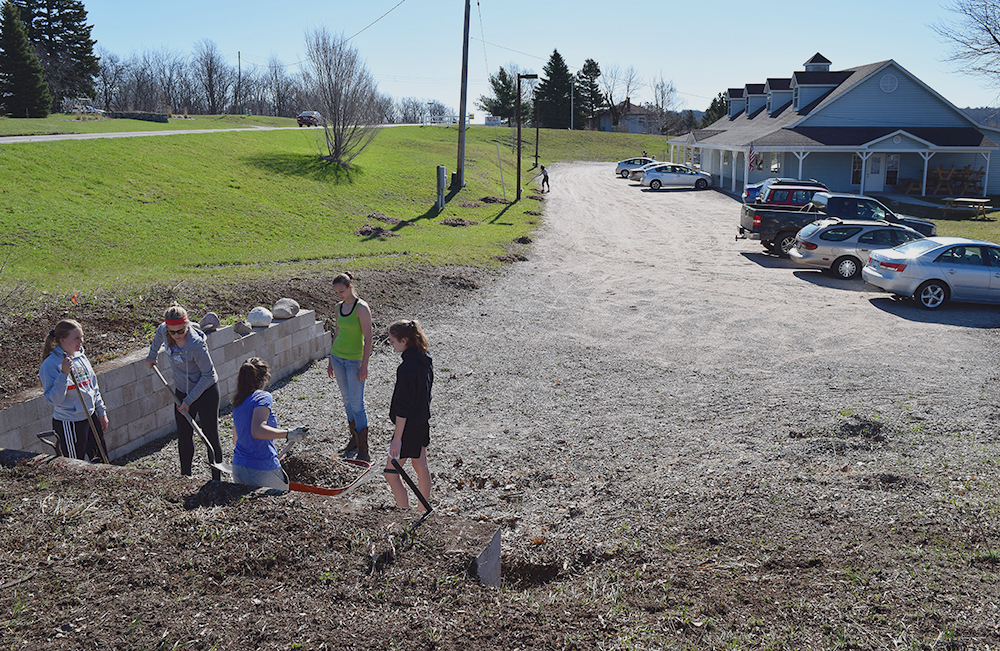 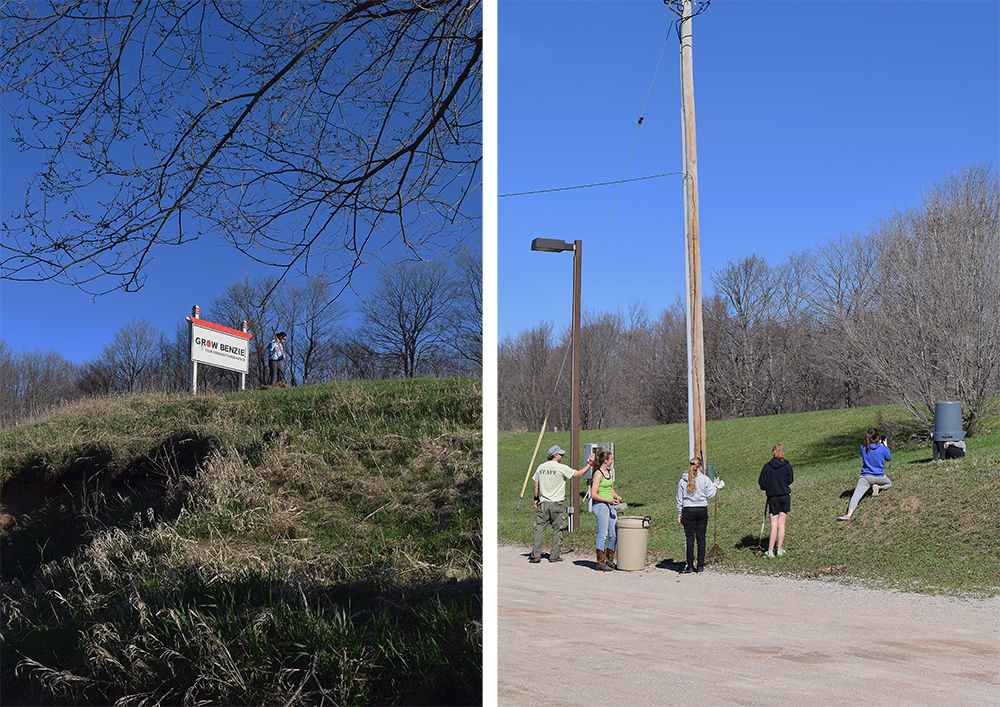 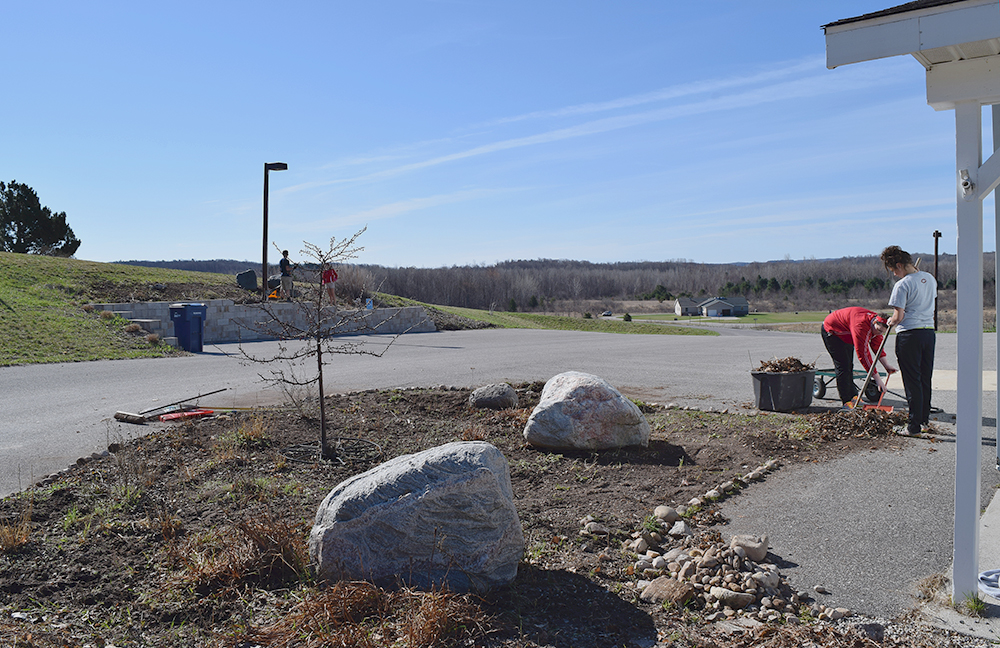