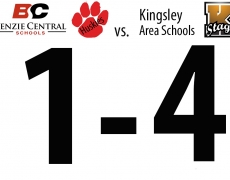 This was the fourth game of the 2015 season for the Benzie Central Girls Varsity Soccer team, and the team’s third home game.

The first 10 minutes of the first half were a little rough, and Kingsley managed to score two goals during this time, because Benzie Central’s heads were not 100% in the game. However, over the next 20 minutes, the play was dominated by Benzie. Though the momentum seemed to switch to Kingsley during the last 10 minutes of the first half when they scored their third goal, the Lady Huskies also managed to score, and this was our first goal of the season, which mixed it up once again. Julie Krogsgaard Madsen, our Danish exchange student, scored the goal, which was really exciting since she was absent for our first three games, as was on vacation in Hawaii — what a way to welcome her back!

Once again, the girls played a much better second half; this is a pattern that we’re determined to break! Kingsley managed to score another goal in the second half, but despite that, it seemed that Benzie had the momentum for most of the second half but just couldnt put the ball in the net; again, this is something that we’re going to work on.

The referees told both coaches Scott Kubit and Aubrey Ann Parker after the game that they felt both teams were pretty evenly matched but that Benzie was doing a lot of “kick and run” instead of control and passing, so we’re going to work on that, also.

One last thing to note is that our girls got pretty tired by the end of the game, especially our midfielders and our defense, so we’re going to continue working on getting into “game shape” after having to practice inside for so long during the winter-to-spring transition.

In summation, if you take out the two to three goals that Kingsley had which were due to some silly mistakes on our part, the game would have been more like 1-1, and we were much more evenly matched with this team. That made it more fun to play, and more fun to watch than some of our previous games this season.

Lisa Roth (Katie Cole’s mom) brought tacos, which the girls ate before the game. Coach Parker brought halftime snacks of apples, oranges, and bananas. Also, Nova was again on site to serve as team mascot, despite that she’s a Black Lab and not a Husky. (Shhhh, dont tell anyone and maybe they wont notice!)

Here is an article by MiPrepZone North about the game, and it includes 50 great photos of our girls in action, so check it out!