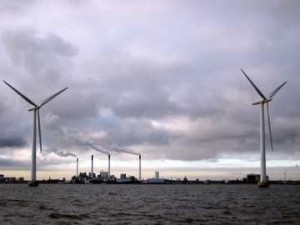 COPENHAGEN – When it comes to wind power, Americans have all kinds of excuses not to use it. “It’s too expensive” or “Not in my backyard” (NIMBY: referencing that they don’t want a tall, skinny, white turbine obstructing their beautiful view of the ocean or the mountains.) Let me begin by saying this is all a sham, in my opinion.

Recognized around the world for the last century of leading the manufacturing industry, Detroit is rusting from the inside out. Michigan is currently experiencing a 15% unemployment rate. Although some jobs have been created since the government incentive to manufacture affordable cars with good gas mileage, the jobless people of our state are still left waiting for the dawn of the second industrial revolution.

Why aren’t we using our technical expertise and warehouses full of machinery equipment to help optimize wind turbines that could be used throughout the world? This morning I attended a three-hour tour to Middelgrunden Wind Farm, just off the coast of Copenhagen. Luckily this tour didn’t turn out like Gilligan’s, because the temperature was below freezing.

The tour highlighted several speakers from the wind energy industry, all of which mentioned the need for better turbine design so that wind energy can become more affordable for consumers. They stressed the importance of new technology to overcome the learning curve in an industry that is still fairly young (only 30 years old for onshore turbines, and less than 10 years for offshore). But the potential is there, and estimates say the demand is growing fast.

The tour boat circled 20 turbines at the offshore Middlegrunden wind farm —- contributing three percent of the Copenhagen energy grid -— and we could see 100 Swedish turbines spinning in the distance. There are 11 offshore wind farms just like this scattered along the Danish coastline, but it still manages to retain its beauty. There are plenty of sailboats docked for the winter in the harbor, and I’m sure their owners still get plenty of use out of them — they might even use the turbines as a sort of obstacle course. The coastline at Middelgrunden is marred with carbon emitting stackhouses in addition to the windmills, and to my way of thinking, I’d rather have 20 skinny, white turbines “ruining” my view of the water than sooty, gray smog.

Denmark has 5,100 wind turbines total —- 78% of which are onshore, 22% offshore -— contributing to 20% of Danish electricity production. Jan Hylleberg, CEO of the Danish Wind Industry Association, projects that by 2020 this will increase to 50%.

I believe that Michigan could lead the green revolution —- supplying wind turbines to the world instead of automobiles —- if we could only think outside the dinosaur graves buried beneath the Middle East. The laws of economics apply here: As fossil fuels become scarce and supply decreases, demand (and therefore price) of these industries will increase to an amount that no one can afford to pay; thus a crash like the recent auto industry.

So why are we giving false hope to workers in Detroit by filling jobs manufacturing high mileage cars that we know are only temporary fixes? Why are we proposing to use our industrial knowledge and resources to build six new coal plants, if we know that the price of this energy is only going to increase? Why, instead, aren’t we seeking our own, domestic solution to this very foreseeable problem in the near future? Shouldn’t we be producing and manufacturing our own wind turbines, as well as supplying them to the rest of the globe?

Simply put, because nobody wants a shiny white turbine obstructing their view of crystal clear Lake Michigan. Absurdity! We get some amazing winds off the bluffs along the coast and we should be taking full advantage of them. And even if you argue that this isn’t enough to meet the energy demands of Michigan, that’s fine -— at least we can sell the technology to other places like Denmark where wind is more favorable.

The Danish wind industry started after the first oil crisis in the 1970s. Denmark was looking for domestic solutions to foreign fossil fuel dependence, and began to develop a plan featuring wind as a long-term, renewable alternative. Although the market began with onshore wind turbines, offshore development—which produces 30% to 40% more energy per turbine -— has experienced a steady increase, expected to grow 45% annually in coming years. This means that in 2015 6% to 7% of the world’s wind energy will be offshore, and the European Union will increase to 20% offshore suppliers, says Anders Soe Jensen, offshore president of Vestas Wind Systems.

Each turbine is 100 meters tall and 76 meters in diameter, producing two MWh per hour, totaling to four million KWh per year —- enough to power around 1,200 households (for onshore turbines), says Jensen. Middlegrunden, with 20 offshore turbines, produces enough energy for about 35,000 households —- this compared to the 20 to 25 thousand households if the same 20 turbines were onshore.

The other wind leaders in the European Union are Spain, with 15% wind power, and Denmark’s southern neighbor Germany, with 8%. Last year the EU as a whole had a 40 percent increase in wind installations.

“We can industrialize this industry at a lower price, building a foundation,” Jensen said. The only thing missing is technological advancement, who is currently hiring for the position of a manufacturing leader.

Christian Kjaer, CEO of the European Wind Energy Association, says the European Union legislation is expected to set a binding target for renewable energy at 20% —- a 5% increase from the current set point. By 2012, the EU will meet its Kyoto obligations because they are already delivering on carbon reductions, says Kjaer. This in stark contrast to Canada, which I heard the other day at the Bella Center is at negative three percent of its Kyoto obligations.

Spain alone plans to intensify this regime, however, ratifying an agreement in June 2010 to have 40 percent of Spanish energy coming from renewable resources, says Carlos Gasco of Ibertrola Renewables in Spain.

“Scientists say we need to act soon,” Kjaer said. “Developed countries need a 25 to 40 percent reduction in carbon emissions. We need a legally binding target by 2020, not by 2050 …” Kjaer not only recommended bumping up renewable energy systems, but also a complete fuel source switch, such as from coal to gas.

Steve Sawyer, the secretary general for the Global Wind Energy Council, has 20 years of experience with negotiations like those seen at the United Nations Climate Summit in Copenhagen this week. He told the tour that by the end of next week 130 heads of state will be here, “and the deal isn’t done yet. Usually they only show up to congratulate themselves on a job well done.”

Sawyer confirmed what I’ve been feeling all week. As far as the negotiations go, there are pessimists and there are optimists here in Copenhagen when it comes to the question of whether or not the United Nations will sign a “real deal” by this time next week. “But as far as I can tell,” Sawyer said, “the game is still in play.” However, he adds, the majority of the negotiations on the table right now are “nowhere near ambitious enough … (despite that) potential is huge all over the world.”

Currently, there are wind projects totaling 33,000 MW under construction now, 22,000 of which are in China alone. Almost 29,000 MW of wind power are currently generated in the United States as of April 2009, according to the U.S. Department of Energy.

“We’ve learned from Europe,” said Denise Bode, CEO of the American Wind Energy Association. The EU set hard renewable energy targets and then each country had to develop their own energy portfolio to reach those goals. “In the U.S., we have no hard targets, so it is up to the individual states to come up with their own objectives,” which is much less actionable in terms of carbon reductions.

I hope as we go into the next week of negotiations that the U.N. does decide to implement strict renewable energy goals. And I hope that the Michigan manufacturing industry will be watching.