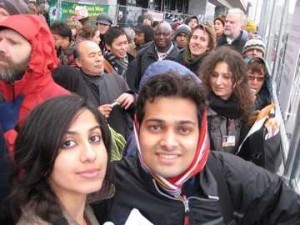 Marina Ahmad of the Pakistan Youth Climate Network and Aniruddha Sharma of International Youth Climate Movement wait outside the UN climate summit, despite Danish police statements that NGOs will not be admitted for the remainder of the day.

COPENHAGEN — I arrived at the Bella Center today at 11:40—just ten minutes after the United Nations decided to ban further NGO access to the climate change conference. But they didn’t tell anyone waiting outside in the cold for more than a half an hour.

Yesterday, the metro stop directly at the Bella Center was closed for crowd control, which meant subway patrons had to get off at the stop before or the stop after the Bella Center and walk one kilometer, before then standing in a very long line—reputed at four to five hours. All the major news outlets were there also, each hoping for something to erupt, but the scene was fairly benign. Everyone realized that because more than 100 heads of state were arriving to the Bella Center this week that security measures had to be ramped up, inevitably leading to longer lines. People were still getting inside—it just took a long time. And free coffee from Greenpeace seemed to be keeping people warm and happy.

I heard from friends that the best time to arrive at the Bella Center and avoid long lines was after the morning rush. There were only about 40 people ahead of me in line, so I figured that I would be out of the fluffy falling snowflakes soon enough. Today the Danish army replaced Greenpeace as soldiers were handing coffee and tea across the fence to people waiting patiently in line. But it didn’t take long to realize that nobody in the line was going inside.

“Let us in!” a few people started intermittently shouting from behind me, and I could see the crowd was growing to well over two hundred NGOs alone (members of political parties and the press had their own lines, and a very few of them were being admitted here and there).

Finally at 12:15 p.m. a policeman on a megaphone announced, “The UN has decided NGOs cannot come inside today. Come back tomorrow.” People from the lines started shouting, “But why?” and when all the officers refused to answer any questions besides, “May I have some coffee,” the atmosphere immediately changed. And in addition, the army had run out of tea.

Two people next to me were particularly vulnerable to this new situation: Sinikka Lennartz, a German student from the Eberhard Karls Univeritat and Aniruddha Sharma from India with 350.org, Sustainable Market Foundation, and International Youth Climate Movement.

“It seems I won’t get my lunch,” said Lennartz, a hypoglycemic. A security guard brought Lennartz three sugar packets as she weighed her options of heading back to the town center or staying in solidarity with the other NGOs trying to get inside.

“What about my coat?” Sharma asked a police officer, Klaus, as he waved his yellow ticket for the coat check. At 11:30am Sharma and approximately 35 others from the Indigenous People’s Group staged a demonstration by walking out of the plenary sessions. Sharma left his coat inside believing that he would immediately be re-admitted. I asked him why he walked out in the first place.

“The developing countries are trying to remove the rights of indigenous people from the negotiations, and this is not acceptable,” Sharma said. He explained to me that the local governments, such as indigenous leaders, are not included in the negotiating discussions, particularly surrounding the United Nations Reducing Emissions from Deforestation and Degradation in Developing Countries Programme (UN-REDD). Additionally, some negotiators are trying to remove the few words that do actually appear in the text regarding indigenous rights.

“If your forest is destroyed, it is the local people who are most impacted by climate change,” he said, now with a slight shiver while wearing my bright red hat on his head. Lucky for Sharma, he was able to flag down a security guard, who sported a shaved head and an earpiece, who ran inside to fetch his coat.

At 12:28 the same police officer as before got on the megaphone and said to the angered crowd, “Because of earlier protests causing a security issue, we are now admitting parties and the press only. Do we have an ministers in the crowd that can please come to the front?”

“The UN has decided NGO’s do not have access today, please respect this and go home.”