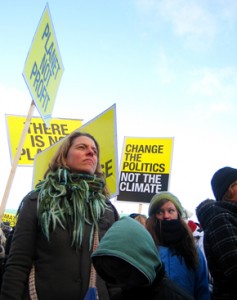 Originally published by the Detroit Free Press and Circle of Blue

COPENHAGEN — The Global Day of Action began Saturday in the South Pacific where the sun rises. The day of international protest started as an uplifting global demonstration calling for a “Real Deal” to come out of the climate negotiations in Copenhagen. More than 3,000 marches and candlelight vigils in 139 countries occurred — some yielding as many as 50,000 demonstrators— all with the intent of spreading this one common, unified message to policymakers.

This may well go down in history as the most coordinated showings of human solidarity and resolve in history.

But the poisoned arrows of the media were aimed at a public Hermes, as the winged-feet of marches advanced westward across the globe, carrying the message to world leaders: Respond to climate change now. There was no debate about science or politics here in the streets of Copenhagen on Saturday. The devil is in the details — small island nations are sinking and in need of assistance while major countries are scrambling to realign their markets for a new-century economy driven by clean energy.

By the time the sun had set in Copenhagen, Western journalists — with the sole intent of selling a dramatic, shallow story — hinged their coverage on the delinquency of a few (less than a dozen as it turns out). Reporters replaced the ethics of journalism and defaced the efforts of hundreds of thousands of people around the world trying to send a unified message.

While the 50,000 peaceful protesters congested the cobblestone streets of a thousand-year-old city — one that remembers when the carbon dioxide content in the atmosphere was over 100 parts per million less — the press took the misconduct of a minority and ruined the message for the majority. This week will be unprecedented as more than 100 heads of state will converge to — as the overwhelming majority of scientists report — decide the fate of our largest cities, our coastal zones, our glaciers, our agriculture, and our economies.

In pursuit to sell news, or Google hits, instead of the frightening reality at hand, many major media outlets are missing the Big Story.

Saturday began with peaceful, large-scale demonstrations in Melbourne, drawing tens of thousands of people into the streets. This was the fifth anniversary of “Walk Against Warming” in Australia, and according to an early morning report by the Associated Press, “Australian marchers lead world climate protests.” Similar titles included “Australians walk to pressure Copenhagen on climate change,” “Protesters demand climate for change,” and “New Zealand youth joins climate change demo” by Reuters, the Sydney Morning Herald, and the Otaga Daily Times respectively.

The BBC displayed the first pictures of the day — the Australian “Walk Against Warming,” traditional Chinese drummers in Beijing, as well as face and body paint displays in the Philippines, South Africa and France. However, the energy and excitement behind such a massive movement waned as the sun moved westward across the globe.

The climate legislation activists were asking for slowly faded from headlines to make way for the enthralling tale of police beatings and incarcerations. What began with “Protesters call for bold pact on warming,” in the Boston Globe, but soon became “Copenhagen Climate Summit Protest: 600 Detained at Climate Rally Urging Bold Pact,” and “600 Detained at Climate Rally Urging Bold Pact,” in The Huffington Post and ABC News. By the time the sun had set in Copenhagen, the headlines transitioned solely to the number of arrests from the demonstration — “Nearly 1000 held after Copenhagen climate rally,” in Reuters and “Nearly 1,000 arrested in Copenhagen,” in RFI.

Like the childhood game of “telephone,” the phrase whispered into a neighboring reporter’s ear became increasingly more dramatic, changing with every new media message. The climate demonstrations ended with a message that so radically changed their original sentiment: “Copenhagen talks stagnate as protest turns violent” reported the Australian Broadcasting Corporation News on Sunday.

It was official — in meager attempts to outbid each other, the media had completely skewed the way the world perceived the Global Day of Action.

Here in Copenhagen, I followed the marchers from start to finish along a 4-mile trek through neighborhoods, past ancient churches and alongside picturesque parks. I took photos and recorded interviews for Circle of Blue, alongside toddlers in one-piece snowsuits and an 89-year-old Danish woman carrying a steaming cup of coffee in one hand and a sign reading “The World Wants a Real Deal” in the other. I did not witness a single struggle between protesters and police during the entire four hours it took to walk from Christiansborg Slotsplads (Parliament Square) to the Bella Center where the United Nations climate negotiations are being held. Nor did anyone that I’ve spoken with over the past two days — other journalists, Danish cab drivers and internationals from Canada and Estonia. Compared to most U.S. football games, the crowd was saintly.

By the time the headlines began to emerge, some online reports were painting a portrait of simply young people marching for good-natured rebellion. And others were taking it even further, seeking any little barb or acerbic note. But the march contained people of all ages, from babies in strollers to old men waving. In many ways, it was the definition of family friendly and cordiality — people making way for others, families picnicking, restaurants opening their doors for people to use the restrooms — despite the striking scene the media has laid out in vivid headlines. 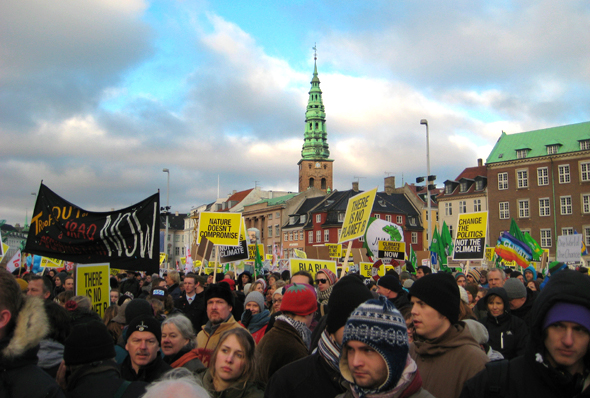 Photo by Aubrey Parker/Circle of Blue

Thousands of yellow signs were made by Greenpeace earlier this week, each with phrases such as “There is no Planet B,” “Nature doesn’t compromise,” and “Bla, Blah, Blah…Act now!” These made up only a fraction of the rainbow assortment of colorful signs. Some people carried umbrellas to emphasize the coming tropical storms due to climate change, while others carried flags labeled with “350” or the iconic symbol Che Guevara. Additionally, flags from countries all around the world were raised high as activists marched in vibrant traditional threads and chanted in native tongues, “Si, se puede”— “Yes, we can.”

Some dressed entirely in blue to represent a “flooding” in the streets. Others dressed in red zoot suits and slick Ray Ban sunglasses carrying signs asking developed nations to pay their debt to the developing ones. One girl figuratively carried the sins of the world on her shoulders, with a cross and an air-filled globe strapped to her back.

A three-story, inflated snowman frowned as he was dragged through the streets of Copenhagen. A mock head-honcho of industry dressed in a suit and smoking a cigar pulled at the strings of his marionette puppets — each a different climate negotiator trading pieces of paper labeled “Nuclear” and “Coal.”

Music and sunshine filled the small cracks and empty spaces between people — varying from Irish jigs to Euro dance beats blasting from speakers on wheels — keeping the cold at bay. Bongo drums, stomping, and chanting came from in front and beside me, each conveying a similar message related to the urgency of climate action now. A band of five young men blew into empty coke bottles to the tune of “Under the Sea” at the start of the march. Further down the road a team of a dozen elderly men and women — clearly former high-school band members — tooted trumpets and tubas, all of which hadn’t been polished in quite some time (much like their well-meaning skills).

The day ended with a DJ mixing techno accompanied by African choirs at a candlelight vigil on a concert stage a few hundred meters from the Bella Center. Speakers included Nobel Prize winner Archbishop Desmond Tutu and former Irish president Mary Robinson, who both criticized developed nations for not bringing progressive enough legislation to the negotiating table.

There’s no doubt there were problems. A handful of anarchists dressed in all black — rightly named Black Box, who were part of the Youth Culture Center shut down by Danish police two years ago — stormed the rear of the parade, throwing rocks, paint and fireworks. Police responded by holding upwards of a 1,000 unrelated marchers in the cold for more than five hours on suspicion to attempt foul play. Less than a dozen were charged with any offense.

Yet this is what the majority of the news industry chose to focus on — the brutality of Danish police and the violence of protesters. The resounding message of the day has been completely distorted, as can be seen in the videos by major news sources that know better, such as the New York Times, NBC, and USA Today.

Aubrey Parker, who is currently pursuing a B.S.E. in Chemical Engineering at the University of Michigan, is reporting for Circle of Blue in Copenhagen. Parker is part of a team from U-M and is also blogging for the Detroit Free Press. Read her blog here, and be sure to check out the rest of Circle of Blue’s Copenhagen coverage here.