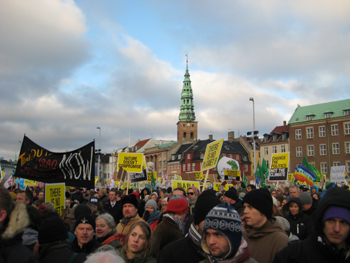 COPENHAGEN – “Today is going to be the most exciting day of the whole conference,” Brian told me this morning, after I got off the phone with my mom, the birthday girl. Dubbed “Real Deal Day,” an estimated 5,000 climate demonstrations staged for today, 12/12/09, around the world are asking for only one thing — a real deal to come out of the Copenhagen climate negotiations. Today one clear, united, and very loud voice is traversing the globe like wildfire — starting with the dawn of the day in the South Pacific, in the far east of the world.

“Wow,” I heard Carl say to himself from his computer, “There’s a Tweet here that says there are 50,000 people marching in Melbourne right now.” This in addition to the 10,000 marching in Brisbane and 15,000 in Sydney. (See an amateur video from Melbourne here.)

There are so many people who have converged here in Copenhagen, but amidst the cry of too many voices, one message cannot possibly be heard over the din.

Each stakeholder wants his or her piece of the climate change pie, about to be hacked apart by your old Uncle Joe who’s legally blind and has a shaky hand.

“I would rather see no deal at all than a watered-down version that doesn’t help anyone,” fellow U of M delegate Ahmed Tawfik told Keith Schneider of Circle of Blue and Climate Action Network.

Only half way through the conference, already many people are beginning to fear that the bureaucratic powers-at-be won’t be able to deliver at the end of all of this.The problem as I see it is that there is such a disparity between the climate proposals that each nation has brought to the negotiating table, making it virtually impossible for anything but more dialogue and digress to emerge.

But there isn’t time for more dialogue—our time is running out to make a change that can actually save lives.

This week I’ve heard the heart-wrenching stories from Bangladesh, the Maldives, Fiji — all places that are already experiencing rises in ocean levels and increased tropical epidemics such as malaria and dengue fever.

I’d like to be optimistic and say that the far distances so many of these people have traveled will all be worth it — one girl I heard speaking on Wednesday said that she had come from Fiji, across 4 continents and 3 days of travel — however, I too am beginning to be disillusioned by all the bureaucracy and lack of one clear, single message.

However, the estimated 5,000 climate demonstrations planned for today — both in Copenhagen and around the world — might be the united front that all of these factions have been looking for.

Maybe next week’s talks will “get serious” enough, following a weekend of international action.

This morning I woke up early to start researching the Global Day of Action, hosted in large part by many different groups in the TckTckTck coalition and Global Climate Campaign. In fact, there are currently more than 527 organizations and networks from 67 countries (85 from Denmark alone) that have signed on to be part of what is assured to be the largest demonstration on climate change to date.

Today is not meant to be a demonstration solely for those like the girl from Fiji who were able to make the long trek to Copenhagen.

According to 350.org, there are currently 3,125 candlelight vigils planned for this weekend in 139 countries around the world. The Copenhagen candle light vigil starts at 5 p.m. today, upon the arrival of the estimated 50,000 climate change protestors arriving from their 2-hour march.

And it doesn’t stop there — tomorrow, faith communities all over the world are planning to “ring church bells, beat drums, blow horns: all 350 times.”

In Copenhagen, a rally begins today at 1pm (AMS), with speakers and music at Christiansborg Slotsplads (Parliament Square).

After mobilization efforts to energize the crowd, fifteen large recycled sails — each embellished with climate messages — will be carried more than three miles over the course of 2 hours, arriving at the Bella Center where they will be given directly to Yvo de Boer, the United Nations Framework Convention on Climate Change (UNFCC) Executive Secretary. (Watch a video of Greenpeace preparing banners and signs for the event here.)

The candlelight vigil will immediately follow at 5pm—but not before the whole thing “getsinteresting,” Carl told me. “You should probably pack a change of clothes in your backpack, just in case. I haven’t been to a march that’s been tear gassed in a long time — not that I expect this one to—but it’s better to be prepared.”

So, if you don’t hear from me tomorrow, it’s because I’m sitting in a Copenhagen jail with 50,000 other demonstrators (what a great present, right Mom?). As exciting as that might sound, I actually hope that we aren’t all incarcerated today…mainly because then who will ring the church bells tomorrow?