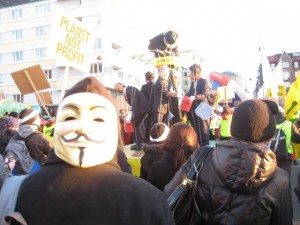 Demonstration and Candlelight Vigil in Copenhagen

Just a quick note (it’s hard to type because my fingers are so numb!).

I just got back from the march and candlelight vigil from the city square all the way to the Bella Center–6km in total, that took over 2 hours.  I was helping to take audio and photos for the non-profit environmental journalism organization that I work for, Circle of Blue. It was incredible: the first sunny day since I’ve been here, so it was just beautiful to shoot.  And the message was overwhelming and beautiful as well.

At the end of the march, the estimated 50,000 people were directed to a stage beside the Bella Center.  There were speakers and music planned, but we decided we had gotten enough footage of the event, and left to get food.  Our cab driver told us that 40 (international) people had been arrested for throwing rocks, but he wasn’t sure what country they were from.

In any event, I think this was really something and I’m hoping that it unifies the voices into one clear message to the negotiators: we want a real deal.  We’ll see if this uplifts the spirits for next week.  (It’s not just in Copenhagen…demonstrations and candlelight vigils are going on right all around the world–Google it right now!) More later when I am more coherent and less cold…