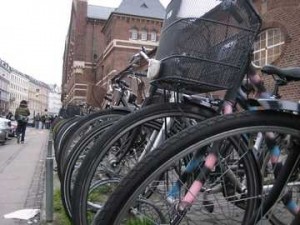 COPENHAGEN – I had heard from friends who studied abroad in Copenhagen that traveling by bike is “the only way to see the city,” but I was totally unprepared for the number of bikes that they have here. The wall of every building is lined with bikes, and the racks in city squares and below subway platforms are mind-boggling.

The bike lanes are serious — clearly marked, and if a pedestrian dares to step out when the crosswalk is flashing red, there is no stopping on the bike’s part. And the flow of traffic by the bikes is continuous: I would guesstimate that there is about one bike for every two cars on the road, or maybe in all actuality the percentage is even higher and I just don’t realize it because bikes are so much smaller than cars and take up less room on the road. Whatever the case, it is amazing that in such a cold, dreary climate there are so many people willing — and somehow appear to actually enjoy — to ride around in the cold, adorned in mittens, scarves and hats, with any sort of belongings or groceries stowed away in the wicker baskets attached to the front.

What might be even more amazing to me is that virtually no one locks their bike here: I would say the rate of bikes with locks is probably less than 20%. Which makes economical sense, to some extent—if everyone already has a bike, there is high supply and therefore very low demand, so not only the cost of new bikes from a store is low, but also those that are hocked on the black market. Why steal a bike if you already have one yourself and you have no one to sell it to?

The public transportation here is just amazing, in general. I really don’t know why you would even own a car if you lived in this city. In fact, I wonder what percentage of the population in the city owns a car … And I’m not just saying that because Ann Arbor’s public transportation services leave something to be desired (the buses to North Campus — where the engineering, music, dance, and art classes are located — are few and far between, and always full to the brim with people talking way too loudly on their cell phones). I’ve visited cities with functioning public transit; I just haven’t visited anywhere that kicks it up a notch, making it a deluxe public luxury.

The subways are on a level all their own: the shiny trains and stations are clean and free of debris (although, I wonder if this is telltale of the “typical” week in Copenhagen, or if they went under a cleaning and re-vamping process prior to the influx of tens of thousands of people? Also, I should re-iterate from Tuesday’s blog that the propaganda of the “Hopenhagen” climate conference is all over the public transit: subway and buses alike.). There is a monitor above each side of the platform that tells the name and final destination of each of the two trains (M1 and M2), along with the time until the next one arrives (which I have never seen longer than a 4 minute wait listed). The trains come very regularly, and are never full, often with plenty of extra seats (that is, unless you are trying to leave the Bella Center around 8 p.m. when everyone is flocking to dinner and the majority of the talks have finished for the day).

Anyone who has takes the New York subway or Chicago’s “L” on a daily basis is probably drooling by now.

In addition to the 20-minute subway ride, I take a 15-minute bus ride to get to the subway station each day. The same scenario goes for the bus system: clean, prompt, and never full (although slightly less prompt than the subway, I have never waited longer than 10 minutes between buses, and the sign tells how many stops away the bus is). Bus-riders either pay per ride with coins or briefly show a white, hard plastic pass resembling a toothbrush to the driver, who nods. Frequent bus-riders have a little black book (almost like a mini-passport) that they open up and flash to the bus rider as well, but I’m not sure if the books have their pictures inside, or how to get one (For example: Do you have to be a resident? Do residents get discounts? Etc.)

Among the list of Metro Rules such as “No playing music in the subway” and “No taking pictures on the subway without prior permission from the Metro Authority,” it mentions that people riding the metro without a pass will be “subject to fines.” Apparently your pass may be checked before you enter the subway, while you are on it, or at the end of your journey—but I have yet to see anyone checking passes. Additionally, patrons are allowed to bring bikes and dogs, but owners of dogs that do not fit in baskets must pay for a children’s pass for their pet.