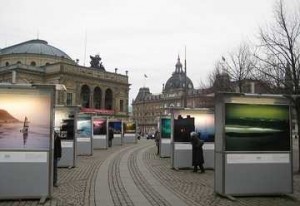 The Kongens Nytorv square in Copenhagen has 8-feet tall posters scattered around the plaza, each filled with facts and photos about climate change around the world. (AUBREY ANN PARKER)

COPENHAGEN — Unfortunately, I opted to watch four Hollywood Blockbusters in place of the inside of my eyelids on my eight-hour overnight flight—not that the screaming baby sitting in front of me, crawling into my seat, would have let me sleep even if I had wanted to. The Delta-Northwest 747 finally arrived at the Amsterdam airport at 8 a.m. this morning, on schedule for me to stand in the 45-minute customs line.

“You like South America?” the stereotypically tall and blond, heavily accented Danish customs agent asked as he marked my passport. I guess he must have noticed the first six pages of the little blue book were filled with purple, red, and gold visas and stamps from Ecuador, Costa Rica, Panama, and Chile — maybe he was jealous that his stamp was so boring in black.

It took 55 minutes to puddle-jump from Amsterdam to Copenhagen. I didn’t care much that I missed breakfast on the plane as I tried to extend the little bit of sleep I had gotten waiting for my transfer. I always forget that my ears are very sensitive to changes in altitude — that is, until one and/or both of my ears won’t “pop” and I am left wincing in pain as the plane ascends or descends.

And so it was that the unwanted fluids in my ear inflicted enough pain to wake me so that I could see us descending from the clouds into a fog-ridden area. I can only assume that the vast expanse of water was the Baltic Sea, or perhaps a harbor of the North Sea. Regardless, the water butted up to a body of land cut by several miles of delta-like tributaries, or a series of mini-islands; depending on your way of interpreting the situation.

Appropriately, my descent into the Copenhagen airport was welcomed by a solitary white windmill, spinning its long “arms” in greeting as it stood on the shoreline facing out across the sea. Upon landing fifteen minutes later, I could see a farm of 20-30 more windmills just beyond the airport.

I had barely stepped off the airplane gate before the propaganda for the Climate Change Conference began in full force. Every sign in the airport was lit up with advertisements for “Hopenhagen” — various NGO’s, the windmill company Vestas, the international electronics and electrical engineering company Siemans, and even Coca-Cola.

I asked for a map of the city from the first of three outposts of volunteers for the conference I saw on my walk to the baggage claim. “There will be more of us volunteers as you walk along: just look for the blue scarves,” I heard a brunette telling a group of indigenous Latin Americans behind me.

I was lucky enough to have my boss picking me up from the airport — Circle of Blue director J. Carl Ganter. Carl and the Circle of Blue team have been on the ground in Copenhagen since Friday, so he was able to give me run-of-the-land. Gotta love good public transit: we didn’t even need to leave the airport to hop onto the subway and head downtown.

We got off at “Kongens Nytorv” (loosely translated, so I’m told, as the King’s Center Square), where a plaza of old architecture buildings were surrounded by a circle of 15 globes. Each globe of the Earth stands about five feet tall and is uniquely and brightly painted, although I am not sure who in the city was in charge of the art display. Additionally, there are 8-feet tall posters scattered around the plaza, each filled with facts and photos about climate change around the world.

We could hear dramatic music playing very loudly and saw a crowd of people in the far corner of the plaza. As we got close, we realized that a masked man with a flowing red cape was hanging from the side of a building — actually, he was basically swinging and running across the side of the building, Spiderman style — next to a three-story long cloth sign protesting climate change that hung from the roof.

There in the plaza filming the whole ordeal were Brian Robertshaw and Mark Mostad, respectively the video and audio crew here in Copenhagen with the Circle of Blue team. Each man was wrapped in electrical cords and had a heavy load of equipment on his shoulder. Meanwhile our fourth accomplice/roommate, Eric Daigh, was back at the flat we’re staying in, editing video the other two had shot over the past few days for Global Observatory.

The Global Observatory organization is providing multimedia content in the form of both news stories and opinion pieces surrounding the activities of the UN Climate Summit negotiations. The office they are working out of for the next two weeks is the European Environmental Agency’s (EEA) Copenhagen office, where Carl took me to drop of my big backpack and laptop computer bag.

Thus, the fourth person I met after getting off the plane was the former president of Costa Rica (1994-1998), Jose María Figueres, who is a member of Global Observatory as well as the CEO of Concordia 21 in Spain. He gave me a handshake and a nice, long meaningful look in my eyes, before rushing into a meeting with Jacqueline McGlade, executive director of the EEA. Twenty minutes later, I watched Figueres sit shotgun as McGlade test-drove a Honda hybrid car, running on hydrogen.

As they drove off on the cobble-brick road, I decided to get back on the subway and head to the Bella Center to see if I could in fact gain access to the conference. As I mentioned in Monday’s post, I was quite worried that since I wasn’t arriving until Tuesday afternoon I might miss out on the “observer pass” that the university had reserved for all 40 U-M delegates. Allegedly, only 15,000 people would have access to the inside of the Bella Center.