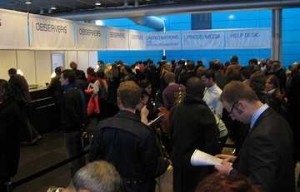 COPENHAGEN — It took 20 minutes to get from the Kongens Nytorv plaza to the Bella Center — the equivalent of five subway stops (plus the additional two stops it took for me to realize that I was going the wrong way on the M1 train towards Vanlose instead of towards Vestamager, which meant getting off two stops later and back on the M1 going the correct direction — more on how I can’t read or pronounce anything Danish later).

Upon arriving at the Bella Center, the rest of the subway patrons and I were greeted by large posters inscribed with “Seeking Vegetarians to save the planet,” and “Vegetarian Diet is the Most Effective Way to Stop Global Warming.” Half a dozen Asians were distributing tote bags full of fliers on the impact the meat industry has on climate change as a video was playing (in English) on a large projector screen just under the elevated subway platform.

“Be vegan,” a petite woman said to me with a soft smile as she slung the tote bag over my shoulder, “for the environment.” (For more on vegetarian diet and carbon emissions, see Monday’s blog.)

I next walked through a series of about three to four checkpoints of security, in which I had to tell each person that I had not yet registered or picked up my pass — secretly crossing my fingers the whole time inside my mittens that there would be a pass available for me (see Monday’s or Tuesday’s blogs on the scarcity of available passes to the conference).

I then had to pass through the equivalent of airport security: taking off my shoes, belt, scarf and jacket, passing all of this plus my water bottle through an x-ray machine as I walked through a metal detector.

Because my shoes beeped, I was patted down by an older woman, who also asked me to take a sip out of my water bottle in front of her (this is where the climate conference was better than airport security — at least in my opinion — because I didn’t have to throw away my bottle, or pour the liquid out).

The man in front of me, coming straight from the airport with all his luggage, was being questioned by a stern-looking blond Dane about his combination beer opener/wine corkscrew. The Dane started yelling something and waving over another security officer — I’m not sure, but I think they made him leave it at the security desk.

Once inside the building, I got a little confused at first — despite help from the plethora of friendly blue scarf-wearing volunteers, and even the semi-friendly looking security team — and somehow ended up in the United Nations delegation line (I had confused it for the University of Michigan student delegation, which I quickly realized as I stood in a very short line of three official-looking men dressed in khaki suits, speaking an African dialect to each other and laughing — probably at me).

“I think I?m in the wrong line,” I said sheepishly to the tall, blond, blue-scarfed girl who I had assured five minutes before that I was part of a delegation. “Where do I go if I’m in a student delegation?” She pointed me to the observer line, which snaked across the room in at least six folds of more than 200 people. All nonprofit organizations were in this line, with a separate line for journalists and the media that was much shorter — only around five people — but I’d heard that their access was even more restricted than the observer access.

I had heard horror stories that the line could take up to two hours to get through, but I made it through in only 45 minutes. The registration process consisted of showing my passport for identification, stating which group I was with, and then getting in a separate line to have my name and picture printed on a flimsy piece of paper attached to a burgundy lanyard labeled UNFCCC (United Nations Framework Convention on Climate Change). I am very worried that my legendary clumsiness is going to destroy my pass before the end of the week.

While waiting in line I heard various interesting conversations taking place around me — and curiously enough they were all in English, despite that only one man was a native English speaker. In the coil of the snake-line to my left, an American professor of environmental law was explaining the policy framework behind deforestation on indigenous lands to a young Indian man and woman. The Intergovernmental Panel on Climate Change (IPCC) assigns 20% of greenhouse gas emissions to deforestation, and therefore the development of the REDD program is hoped to offset this major source of climate change.

The United Nations Reducing Emissions from Deforestation and Degradation in Developing Countries Programme (UN-REDD) will give a numerical, monetary value to forests based on their carbon storage capacity?how well they serve as “carbon sinks.” UN-REDD is “aimed at tipping the economic balance in favor of sustainable management of forests.” In other words, developed countries may have to pay developing countries to reduce emissions caused by deforestation and degradation.

Recent discussions, however, say that this could be detrimental for forest-dependent indigenous communities. Although REDD could offer support to these communities, many fear that giving monetary value to forests will bring about additional land-grab conflicts if government laws do not recognize the rights of these indigenous communities — which, sad as it is true, occurs in many developing nations around the world where the economic interests of the majority of the population overruns the human rights of the minority.

Behind me, a Chilean-converted-to-Canadian was arguing with a Frenchman about the possible “cap-and-trade” carbon policy. The Chilean felt that a cap-and-trade system, as attempted by the European Union, would not be sufficient as a stand-alone way to curb climate change, because of the exorbitant amount of “big business” corruption that can occur. In the cap-and-trade model, each sovereign nation who signs the proposed UN bill would set a baseline amount of carbon dioxide that may be emitted. Corporations or industrialized countries that emit/pollute more than the “cap” amount must then “trade” carbon credits with other corporations or nations that emit less and have spare credits.

The Frenchman argued that the cap-and-trade policy had not worked in the European Union because it was not strict enough, nor was there a sufficient jurisdiction monitoring the system. Further, he said, the only way to manage a public good (such as clean air) was to use economic market mechanisms, because often public goods left in the hands of individual governments are neglected. He then tapped the man standing in front of me, who had claimed to be Danish 20 minutes prior, and asked “Don’t you have a cap-and-trade system here in Denmark?”

“Yes and no,” the Danish man responded. “We don’t call it that, but it essentially works that way.”

“Do you believe that it works? Or did it fail like the EU cap-and-trade system?”

“Oh yes, it works,” said the Danish man. They then got into more specifics, and by this time the Chilean agreed that economic models work well for public goods, but that is why a simple cap-and-trade system cannot stand alone. It must be supplemented, he said, with a carbon taxation policy which would encourage further reductions by big carbon emitters. I think I tend to agree with his dual-model scenario.

In the snake line to my right, I was delighted to hear Spanish being spoken, although I later realized as I eavesdropped that one of the two women speaking was not a native speaker (I think her native language was actually Portuguese). The Portuguese woman was asking details about the recent UN climate negotiations that had occurred in Barcelona, Spain.

Being surrounded by the very foreign-to-me sounding Danish?on the public transit, in the bakery, and from the surplus of security folk at the conference?even for the short amount of time that I have been in the country, it is already beginning to take its toll on me. It is very hard for me, personally, to be in a place where I don?t have a clue what is going on or being said, and at least with my background in Spanish I can partially decipher other Latin languages like French, Portuguese, and Italian — although more so in written form that verbal.

To me, Danish sounds and reads a lot like German, “But happier,” one of my fellow U-M student delegates agreed. Almost as if Danish is the language of the cheery chef on The Muppets — Kermit has no idea what Chef is saying, but it’s obvious that he’s in a good mood. So it is with Danish: a lot of consonants (extra k’s, n’s, m’s, g’s, h’s, and d’s) that they simply do not appear to make use of whatsoever.