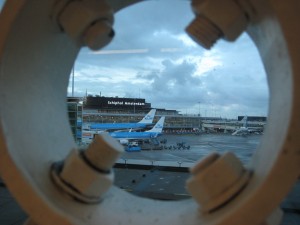 We are at a crossroads and I believe if planned carefully, the correct infrastructure will support global growth that encompasses environmental stewardship and the viability of local cultures. (Photo by Aubrey Parker)

DETROIT — I leave today for the UN Climate Change Conference in Copenhagen, Denmark — after I take a final exam and turn in two final papers (not to mention the two papers I have to write while I’m gone, and the two exams I take on Dec. 18, the day after I return!). Because I will be attending the conference for the last two weeks of classes at U-M, I had to make special arrangements with my professors, all of whom have all been very understanding and accommodating.

My flight leaves at 6 p.m. from Detroit, arriving in Amsterdam at 8 a.m. local time. This will leave just enough time to make it through Danish customs for a 10 a.m. departure to Copenhagen. In all, it will take about 15 hours to get from my house in Ann Arbor to the terminal in Denmark, and then a twenty-minute subway ride to the Bella Center to register for the conference. I’m a little worried about this process, however, because I’ve heard via grapevine e-mail rumors that the conference organizers underestimated the number of participants and now are restricting access to only 15,000 people. The University of Michigan Delegation alone has 40 members of alumni, students and faculty — so potentially only about 375 delegations of this size from across the globe could gain access — and I’ve heard it is a first-come, first-serve basis that started early Friday morning.

This is shocking to me, that such forethought has been miscalculated and underestimated. Given the year of hype behind the UN Climate Summit, I would have expected better planning. However, anyone who has any experience with big events knows that no amount of planning can ever be enough — you just hope to have enough to get you through as mess-free as possible.

Speaking of messes that we’ve made for ourselves: Captain Planet and his “Planeteers” made it seem so easy and carefree to decontaminate the Earth. Touch our nifty, colorful rings together and a superhero appears out of nowhere to simultaneously kick the butts of bad-guy polluters and carry away all the toxins they’ve dumped in the nearest river. In the real world, however, it’s a lot harder to realize that you are one of the bad guys — everything from the car you ride in to the food you eat is contributing to the suffocation of the planet.

Thanks in large part to good parenting and growing up surrounded by the spoils of nature, I’ve spent my whole life trying to waste less and recycle more — except for that brief mind-lapse during my teen years, when I spent every morning washing, drying, and straightening my hair and worked at the mall for the 50% retail discount. Don’t worry: the reality of college stress quickly straightened me out — leaving my hair in messy curls as I attended class in my pajamas. My mom calls this “sloppy,” but I argue that it also happens to be more environmentally friendly and less consumptive overall to buy less clothing and hair products. Along the way, I’ve learned many other “green” lessons outside the classroom, which have led to my current way of thinking:

• I lived in South America for seven months, and I became a vegetarian after seeing slash-and-burn techniques used to clear rainforests to make way for cattle farming. According to The Nature Conservancy, a single person eating meat most days but not at every meal contributes 4.1 tons of CO2/year. The average American eats 200 pounds of meat per year, and eating vegetarian is one of the quickest and easiest ways to cut your carbon footprint.

• I attended Power Shift 2007, a 4-day conference where more than 5,000 college students gathered in Washington, D.C., to lobby congress on climate change issues and green jobs.

• I’ve seen Bill McKibben speak twice about climate change and his organization, 350.org, which on October 24th, 2009 organized more than 5,200 environmental action events in 181 countries. McKibben wrote the first book on climate change for a non-scientific audience, The End of Nature, twenty years ago.

• I’ve been involved in environmental student groups like the Sustainability Guild, Campus Energy Group, and EnvOrg of Kalamazoo College, as well as BLUELab and the Student Sustainability Initiative of The University of Michigan.

• I’ve worked on various projects such as living in a Sustainable Living and Learning Housing Co-op, co-sponsoring “Do-it-in-the-Dark Week,” and hosting a concert against the wasteful practice of bottled water.

• My past environmental internships have included watershed erosion control practices in Wisconsin, environmental journalism and data analysis in Traverse City, as well as algae fermentation for use as a biofuel at Western Michigan University.

Through my studies and travels as a young adult, I have found that environmental issues and environmental stewardship do not exist in a vacuum. They are inextricably linked to both the global and the local cultures to which they belong, and as such, designing sustainable solutions cannot merely be solved through science, technology, or even education. Only by understanding the intra-cultural and cross-cultural differences which link communities can we craft policies which promote the appropriate use of land and resources while still preserving the culture inherent to the people.

This is why I was so dismayed to discover that the UN Climate Change Conference organizers had limited the attendance list. I feel it is of the utmost important to have an international conference that can be attended by anyone who has something to say surrounding the issue of climate change — whether they believe in it or not. Everyone should have the opportunity to voice their opinion, as well as to learn from the opinions of others from across the globe. Ultimately, the legislation signed in the next two weeks will concern all human beings alive today on this planet, and will have an impact on the generations to come.

In a “green” age of buzzwords such as “sustainability,” and “globalization,” we must tread carefully. We are at a crossroads and I believe if planned carefully, the correct infrastructure will support global growth that encompasses environmental stewardship and the viability of local cultures. It often takes a personal connection to understand these complex issues, and that is why I am so excited for the chance to attend the Climate Summit in Copenhagen. I believe that this is how we craft change: by finding an issue we can connect with on a personal level. Please check back daily for on-the-ground coverage of the UN Climate Conference, from a student perspective.