This was the second game of the 2017 season (if you don’t count the two 60-minute tournament games over the past weekend at the Comet Cup in McBain) and the second away game for the Benzie Central Girls Varsity Soccer team. It was overcast and 45-ish, so pretty cold but not freezing; there was quite a bit of wind, which is typically true of Suttons Bay, right near the big lake. Though the game was played at Suttons Bay High School, our opponent was actually NorthBay: a co-operative team of Suttons Bay High School, Northport Public School, and Lake Leelanau St. Mary’s School. (For reference, Northport and Suttons Bay had their own individual teams last year.)

For the most part, our Benzie girls played quite well, especially when compared to our first game of the season against the Traverse City Homeschool team last week on Thursday, which you can read about here. It seemed like a different Benzie team showed up in Suttons Bay than had shown up against the TC Bulldogs; partly, the coaching staff attributes this to us mentally preparing for this game better than the last game — we made it clear to the girls that we needed to work hard from the very beginning if we didn’t want to get a bunch of goals scored on us right away. Notable: this game against Suttons Bay was played later in our season last year, on April 25, but we lost 1-5, with three goals scored in the first half, because our girls were slow to start. Furthermore, the NorthBay team won the Comet Cup last weekend (which you can read about here) by defeating McBain Northern Michigan Christian by a score of 3-0, and NMC had beat us by a score of 1-3 earlier in the day. The girls seemed to take these points to heart, because they played very strong against NorthBay, even in spite of the fact that we were not able to start Haley Papineau or Hanna Burch for the first 10 minutes of the game. (Haley had missed practice on Friday for her robotics competition, and Hanna came straight to the game from a doctor’s appointment in Traverse City, so she was a little late.)

NorthBay took a total of nine shots in the first half. A pair of shots resulted in the only goal that NorthBay scored, when #3 Sydney Deadman scored on a rebound from her own penalty kick. Benzie’s goalkeeper Maile Church was having a phenomenal game, and she made an incredible dive to her right side on the PK and was able to tip the ball out, but our defense was a little slow to run in, and Deadman was able to score off her own rebound. Meanwhile, our Benzie girls took five shots during the first half (four shots by Haley and one by Mimmi Peuhkurinen).

We continued to play around with positions this game, moving Hanna to center defense, Allie Howell to sweeper, and Haley and Allana Bostick up to forward positions to try to create some offensive plays. Haley had a weird calf cramp that occurred about halfway through the second half, so she had to come off the field, but she was able to go back into the game after stretching it out for a few minutes. Shortly after that, Kaitlynn Pataky collided with a NorthBay player, body to body, and needed time to catch her breath, because she’d had the wind knocked out of her. When Coach Aubrey Ann Parker went onto the field to check on Kaitlynn, she suspected that Kaitlynn might have a concussion, so she called Kaitlynn’s dad over from the stands and then called the Paul Oliver Memorial Hospital training staff — Adrienne Jones suggested that Kaitlynn go to the Emergency Room at Munson to get checked out. As it turns out, Kailtyn did suffer a mild concussion, so she will have to sit for 7-10 days, until she passes through the MHSAA’s return-to-play protocol.

Everyone was able to attend the game, though we had six who were not able to dress out, because our extra jerseys have not arrived (Lucy Straubel, Clara Reed, Brianna Dufrane, AuSable Kreiner, Ashley Winfrey, and Emma Quick). Laura Franklin (Chloe’s mom) brought pasta salad and granola bars for a bus snack; for halftime snack, Margie Clous (Myah’s mom) brought strawberries and Wendy Papineau (Haley’s mom) brought apples and watermelon. Referees were Kevin Avery, Jerry Grieve, and Ricardo Rodriguez.

Below you’ll find photos that I took, as well as photos by our freshman soccer player Brianna Dufrane, which are marked with a BD watermark in the bottom right corner. Also, here is a link to stats coverage from the game on the Traverse City Record Eagle‘s website. 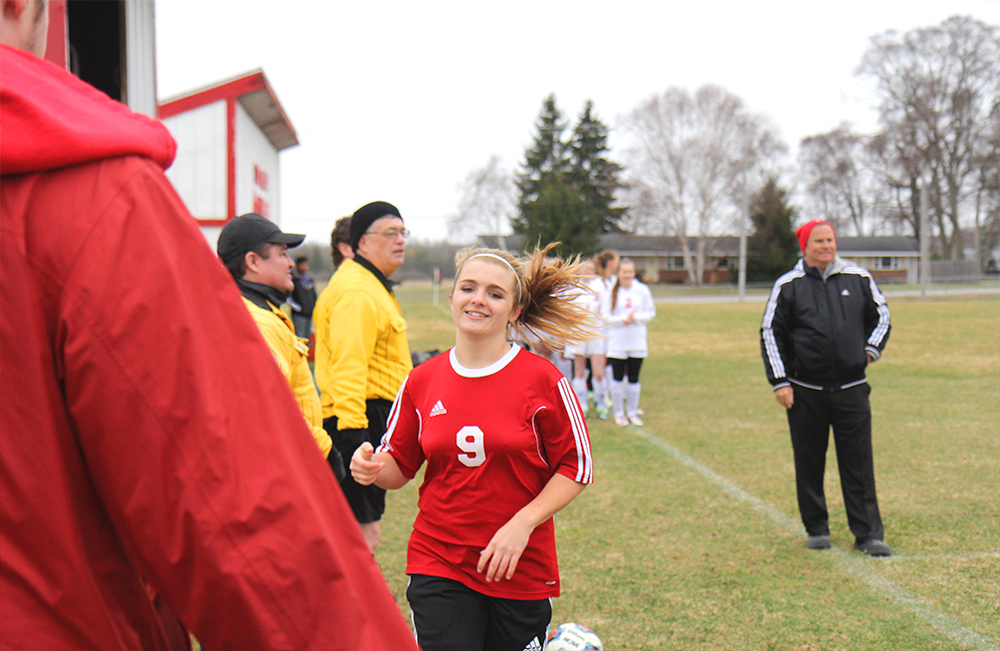 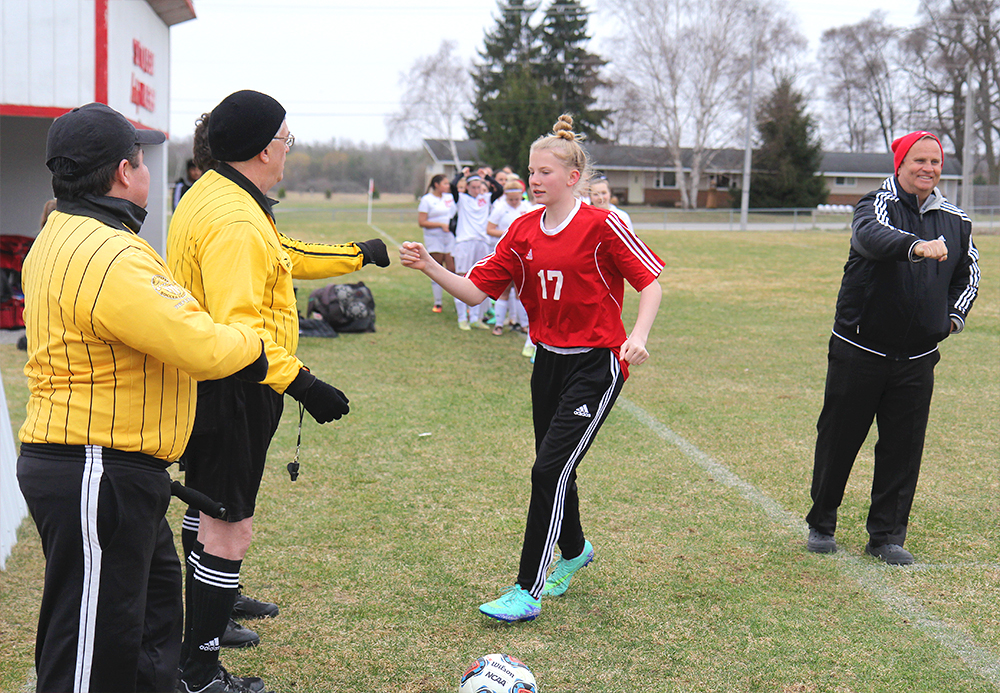 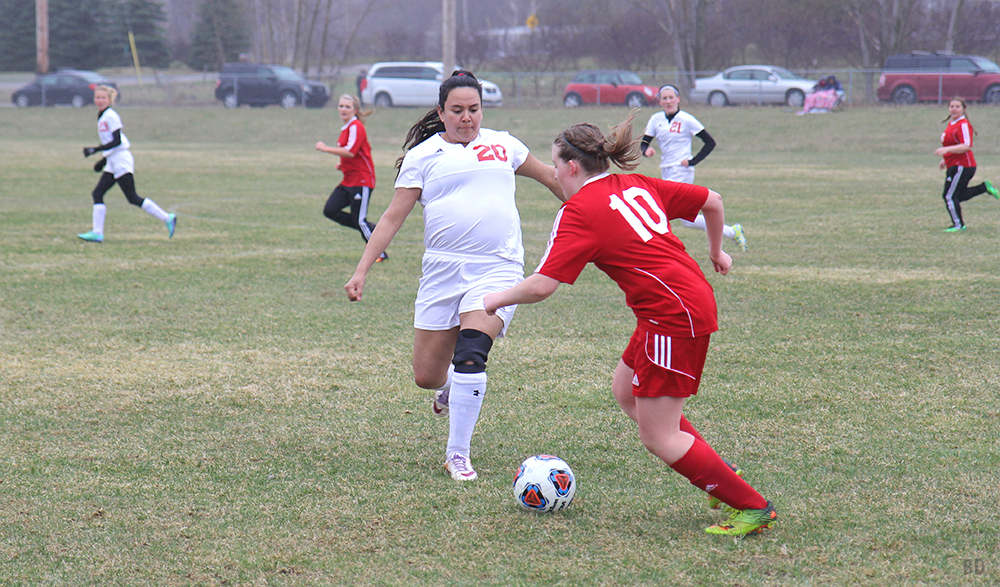 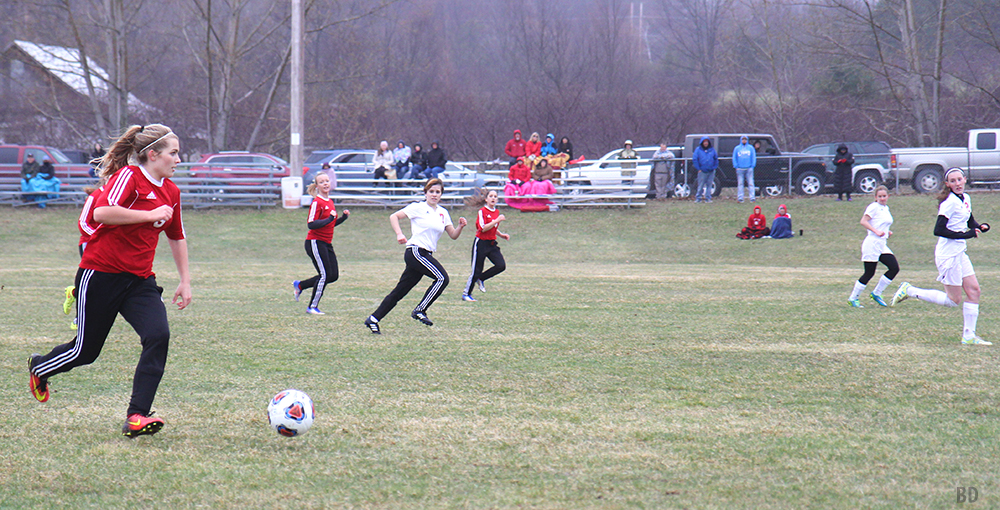