This was the fourth game of the 2017 season and the second home game for the Benzie Central Girls Varsity Soccer team. It was overcast and 50-ish, so a bit chilly but not freezing.

There were 21 shots taken during the first half of the game, when Maile Church was goalkeeping; Glen Lake was able to score on five of these opportunities. All but one were defensive errors, rather than goalie errors; we need to learn not to dive in at the 45-yard line and to jockey back instead. We also need to learn to mark up better on our defensive half and move as a unit.

The first goal came just one and a half minutes into the first half, when Glen Lake’s #12 senior Lili Kaastra went unmarked when she received a cross from the outside and scored at the 6-yard line in the center of the field. The second goal, scored by #8 junior Jennifer LaCross, came seven minutes later, and was again a result of poor marking. Glen Lake scored a third goal at 21 minutes into the first half — this time it was #11 senior Annie Lively that scored unmarked. The Huskies held on and started playing better for the last 20 minutes of the first half, but Glen Lake’s #10 junior Allie Bonzelet was able to score with 10 minutes left in the first half when she was unmarked and Maile was slow to come out. The fifth goal came with only 59 seconds left in the first half, when the ball was crossed in, and Bonzelet scored again.

During the second half, we changed things up quite a bit, putting Sydney in as goalie and moving Maile to center midfield. There were 17 shots fired, nine of those on net, and Glen Lake was able to score three goals in the second half. Moreover, near the end of the second half, Coach Adam Worden suggested that we try a 4-4-2 configuration (4 defenders, 4 midfielders, and 2 forwards) instead of the 4-3-3 configuration that we’ve been playing so far this year. It seemed to help some, and so we stuck with this configuration in the second half. The Huskies held off the Lakers’ offense for the first 14 minutes of the second half, until #8 LaCross scored her second goal of the night when she was unmarked at the 6-yard line after a cross from outside. Then, 14 minutes later, LaCross scored her third goal of the night (called a “hat trick”) off a rebound after Sydney saved the penalty kick. Ten minutes later, with only two minutes left in the game, #12 Kaastra scored Glen Lake’s eighth goal of the game, which meant that we were “mercied” and the game was over. (By contrast, we were mercied in our first game against Glen Lake during the 2016 season with only 30 seconds left in the game, which you can read about here, but two years ago, we were mercied by Glen Lake on the first showing against them only 15 minutes into the first half.)

Overall, the team played decently, and we are still trying to figure out positioning. Glen Lake is a team that consistently is at the top of our conference. Additionally, we were missing quite a number of our key starters for this game.

Below you’ll find the only photo that I took that night. Also, here is a link to stats coverage from the game on the Traverse City Record Eagle‘s website. 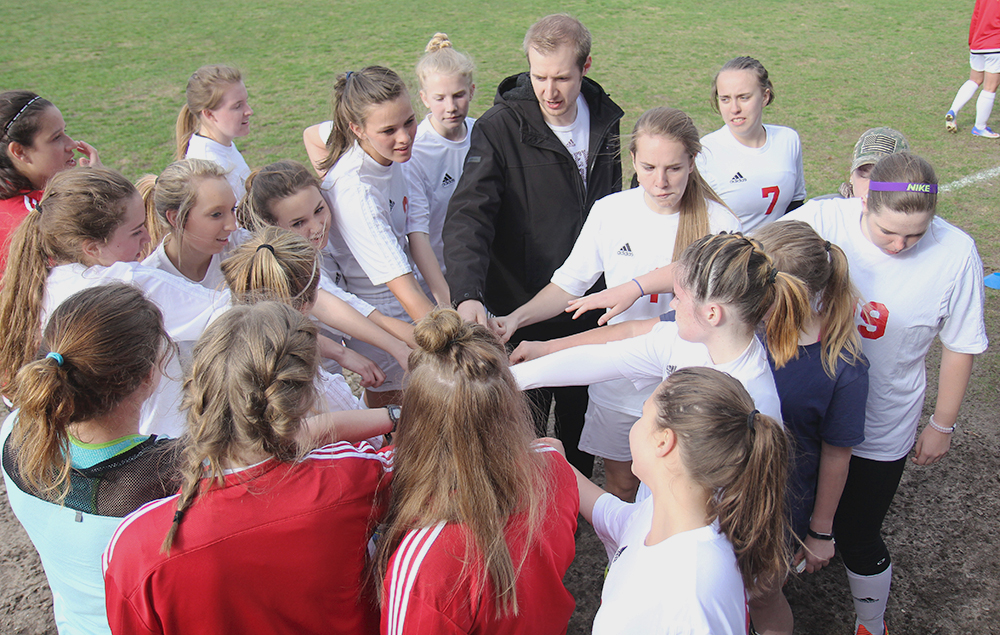