Overcast and 45-ish, so pretty cold but not freezing, though it was a bit windy.

Note that we had not really practiced outside much before this… So far, we have practiced inside the Middle School gym and hallway every school day since Monday, March 12, except for Friday, March 23, when there was a half day before spring break, and last Friday, April 6, when we went outside for the last half hour to play “handball,” a European game that helps our soccer players with spacing. (I know, it seems counter-intuitive to have the girls using their hands, but it’s actually very good cross-training for soccer, and it was something that we could do — run around on the soccer field in boots, use our hands, and not have to worry about kicking on several inches of snow.) We also went outside again on Wednesday, April 11, to play handball for about a half an hour again. But as far as soccer, we had not practiced outside as a team yet before we headed to Shelby, so it was great to finally get to do that.

We left the school at 2:15pm (students were dismissed from classes at 2pm) to travel to Shelby; soccer games are played at the field to the south of Shelby Middle School at 641 North State Street, Shelby, MI. For those who don’t know, that is past Manistee and Pentwater, not quite all the way to Muskegon. We played alternating 30-minute halves; Varsity began at 5pm, then we switched to JV at 5:30, then back to Varsity at 6, and then back to JV at 6:30.

According to the MHSAA, we are not allowed to convey scores or results for scrimmages. “Scrimmages are for instruction more than competition. Schools may not publicize results of interscholastic scrimmages in any sport. Awards cannot be given and results may not count on the won-loss records of the school.”

So if I were to talk generally about the scrimmages, I would say that the girls had tons of fun and you could tell that they were excited to be outside and playing “real” soccer after being cooped up in the gym for the past five weeks.

We are still figuring out positioning, having gained several new players this season. We tried quite a few girls out at several different positions, both on the Varsity and the JV teams, which really helped the coaching staff to begin to figure out where the girls will be playing this season. For instance, on the Varsity team, we started Allana Bostick at offensive center midfield, but we moved her to right forward in the second half; we had Allie Howell sweeping during the first half and Jenna Cole sweeping during the beginning of the second half (before we had to take her off to start warming up for JV goalie); Novia Dalzell started at right midfield, but moved to offensive center mid in the second half. Some girls who started on the JV team also got quite a bit of playing time on the Varsity team: Jordin Purchase and Aleiya Ross at both forward and defensive positoins; Kali Price, Maddie Nielsen, and Maja Westerberg at midfield (and Maja played sweeper for the entirety of the JV game).

Also, our starting Varsity goalie is typically Maile Church, and she played almost all of the 60 minutes of Varsity time, except for about 10 minutes at the start of the second half, when she was having stomach issues; Sydney Ghering filled in. For the JV scrimmage, Sydney played the first half, while Jenna Cole played the second half. (This was Jenna’s first time ever playing goalie, outside of practice.)

Over the course of the next few games, we will be continue to play around with positions until we get our girls into the best fit, which is normal — all in all, I feel like we have quite a bit of depth in positions that we haven’t had in the past, which is a good problem to have. Overall, the teams both played decently, given that this was the first showing of the year and that we were missing a starter. (Haley Papineau was absent for the Varsity scrimmage, because she was at a robotics competition.)

The three biggest things that we have to work on after this pair of scrimmages: passing through balls (instead of just “kick and run”), throw-ins (both the mechanics of throwing and the movement of other players for the throw), and goal/corner kick positioning. (And much of this will be stuff that we can do once we start practicing outside; it’s very hard to practice these things inside a small gym!)

Coach Aubrey brought apples, bananas, oranges, cheese sticks, and peanut butter for a snack on the bus and halftime snack. (All photos by Abbie Smith are marked with AS, while all photos by Sydney Ghering are marked with SG. Photos by Aubrey Ann Parker are not labeled.) 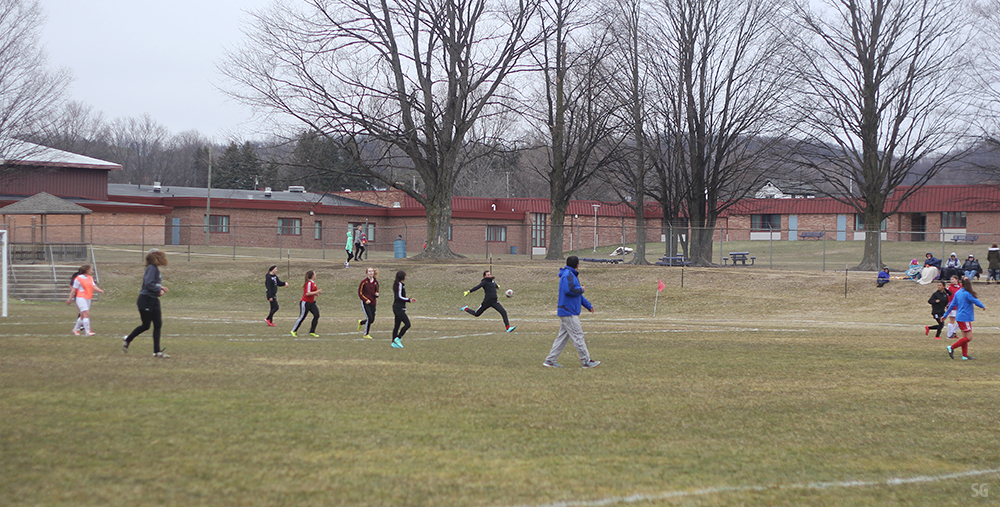 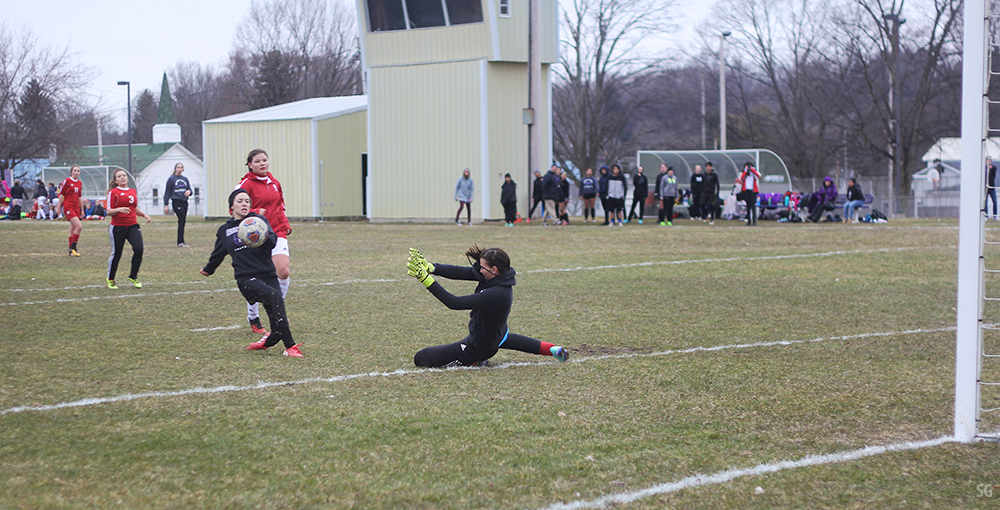 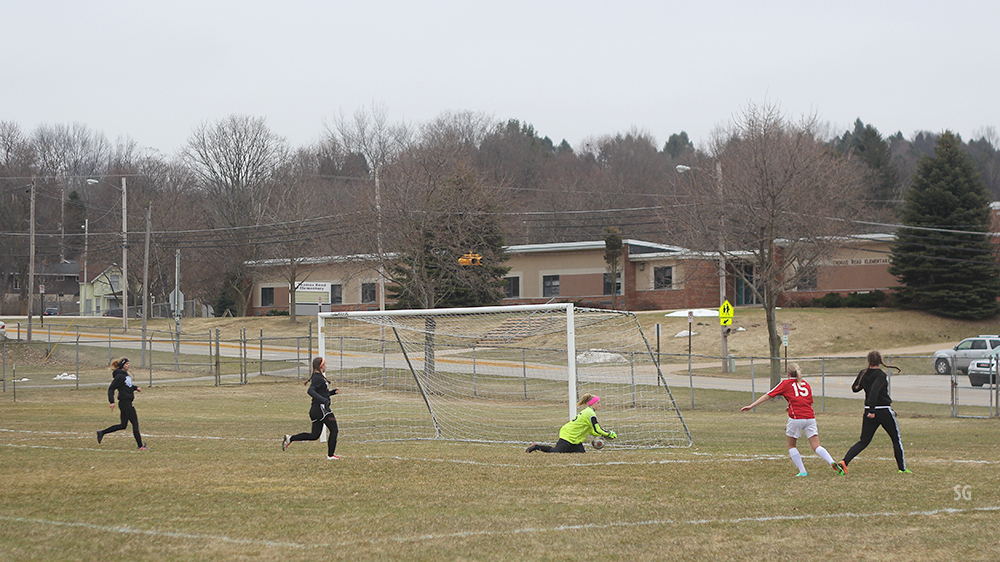 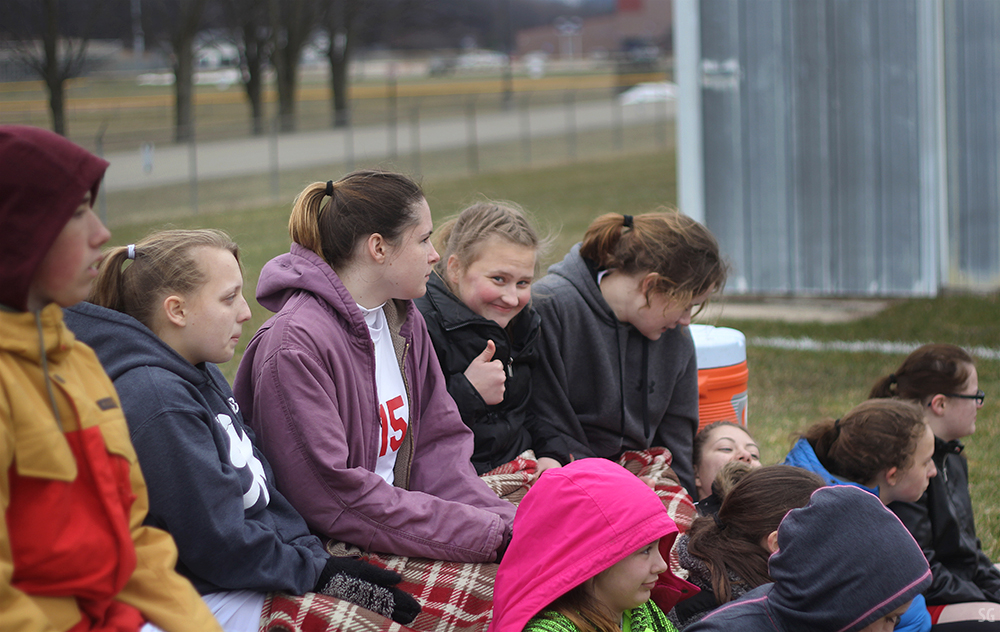 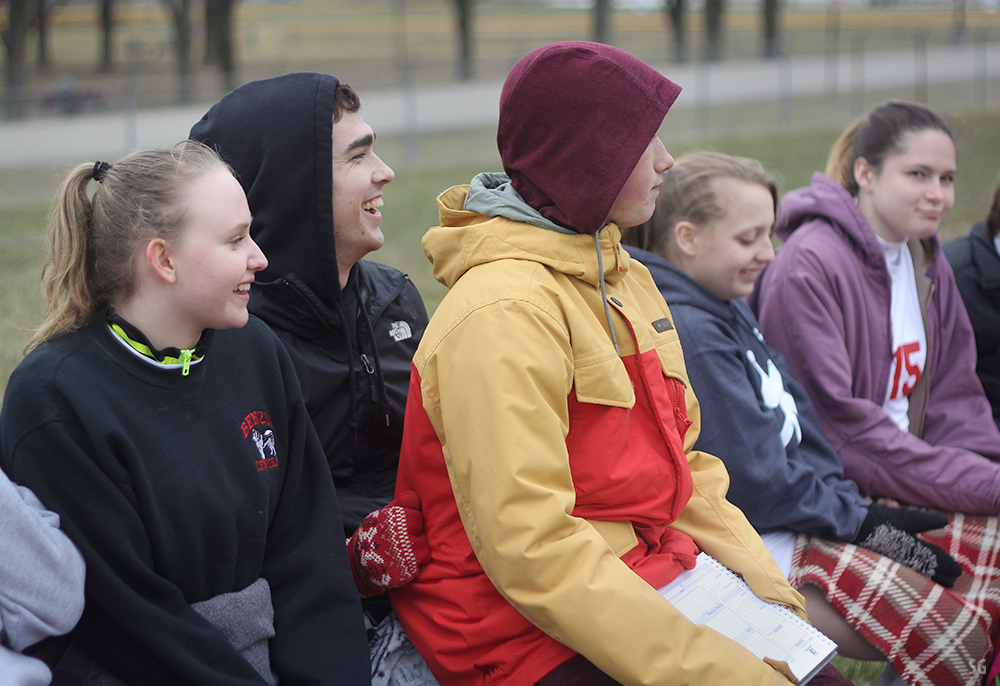 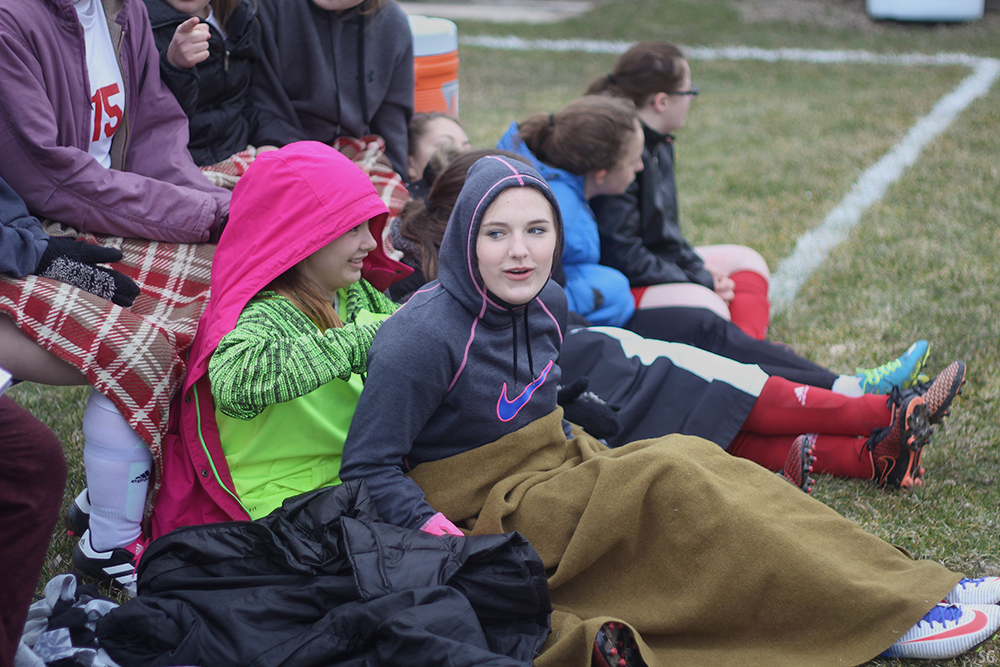 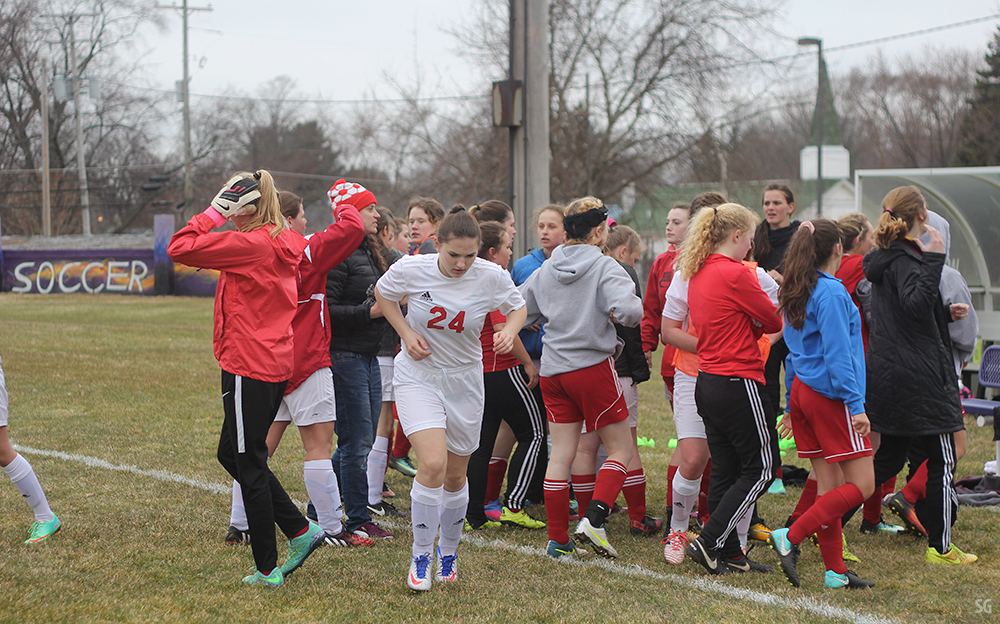 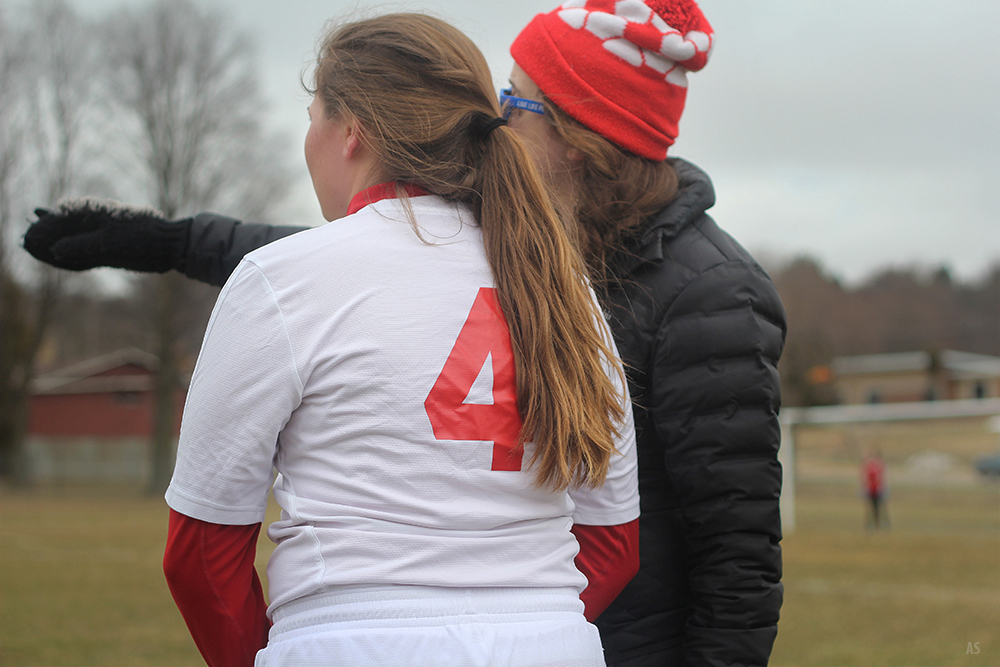 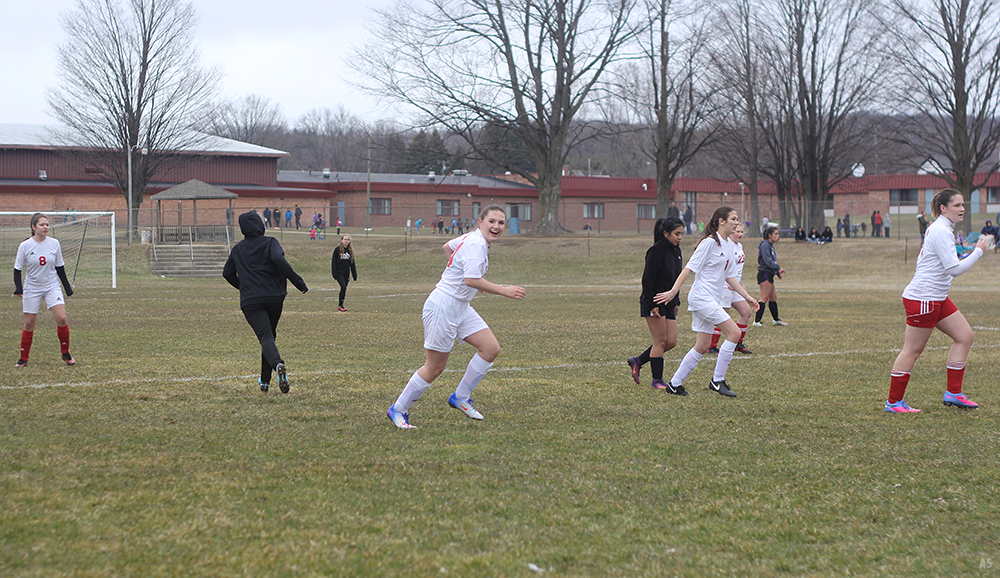 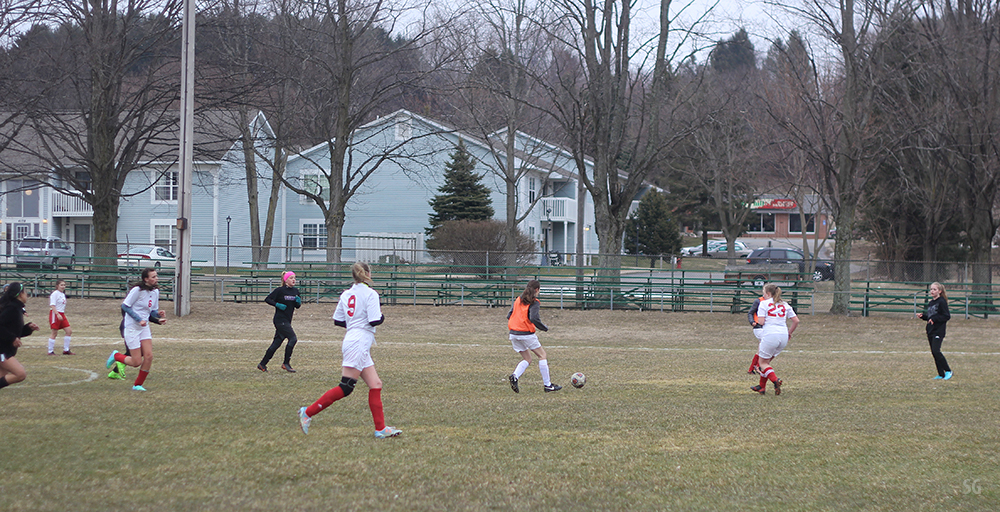 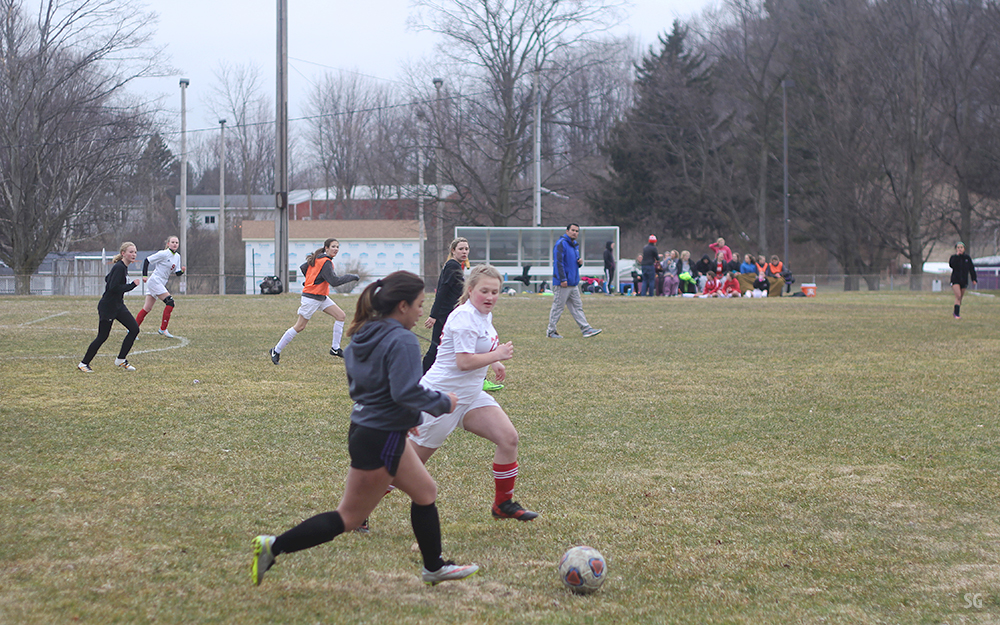 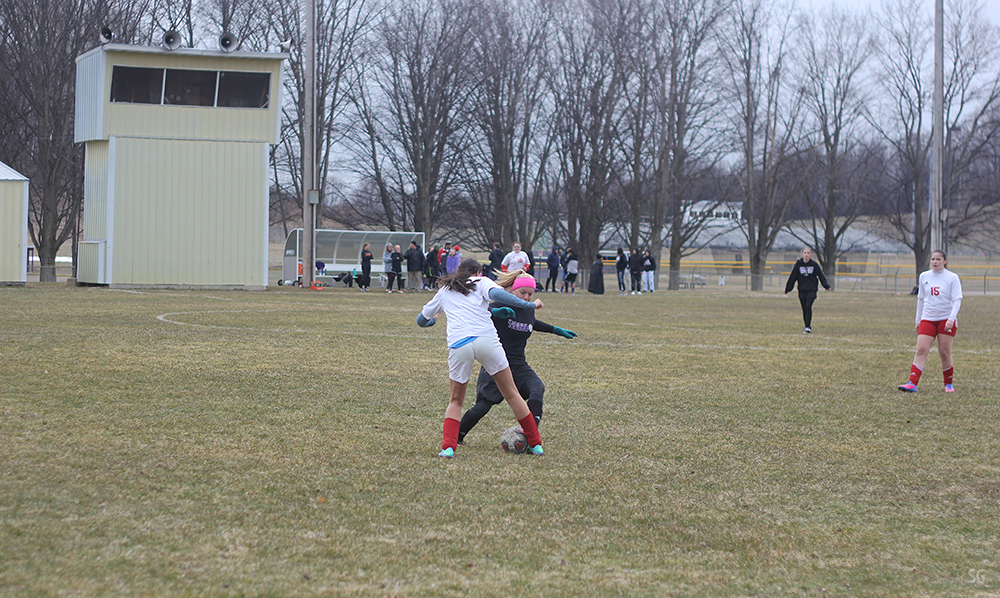 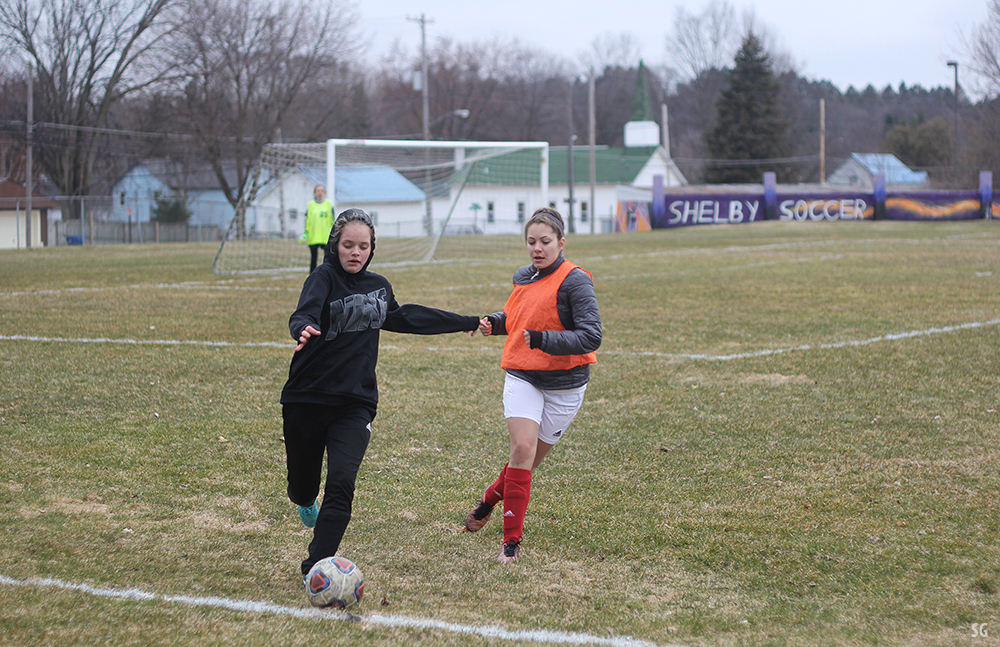 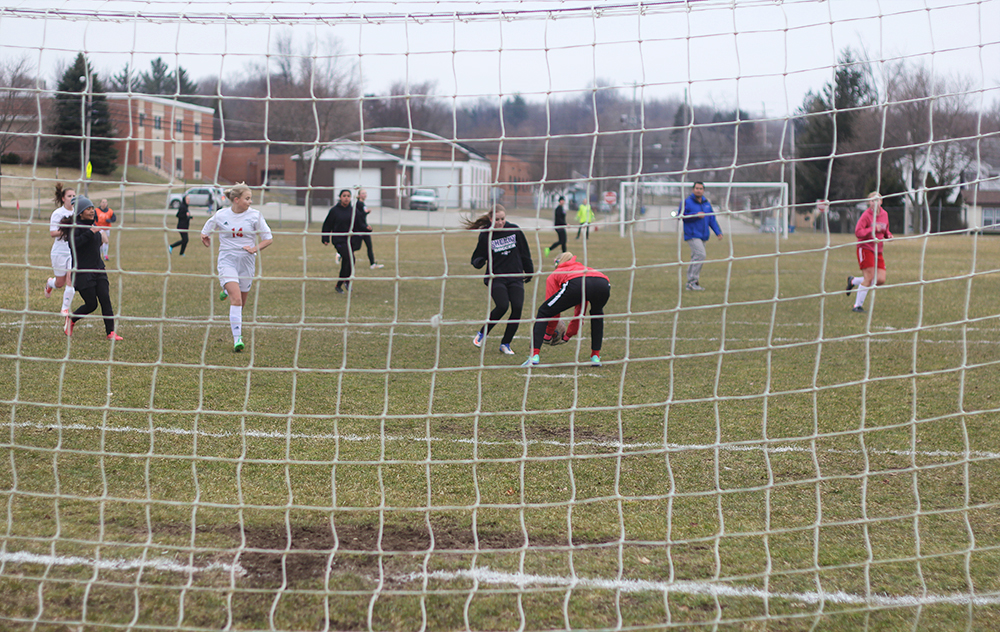 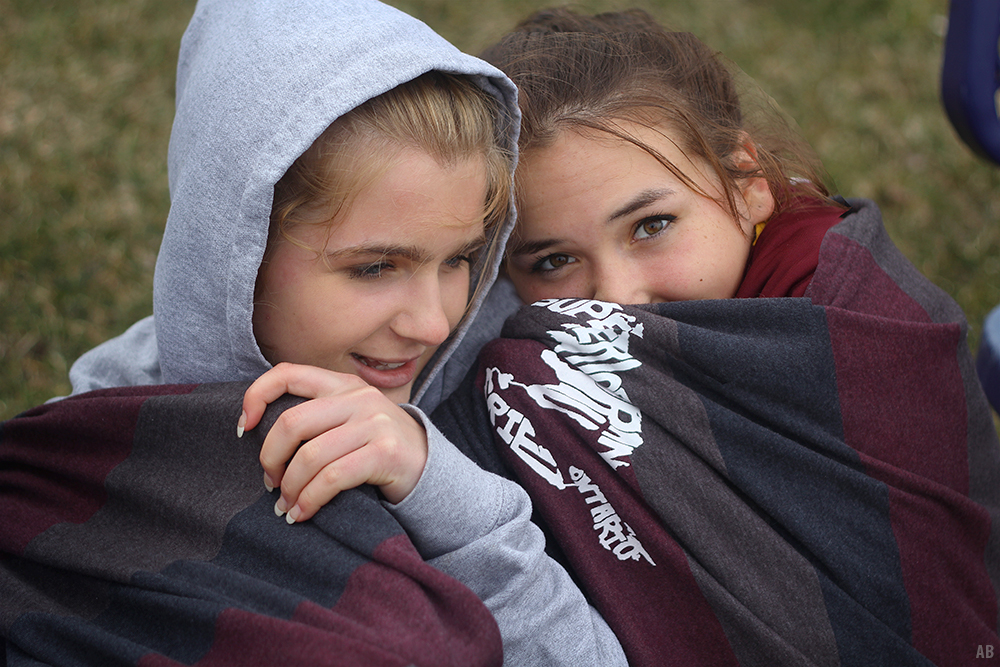 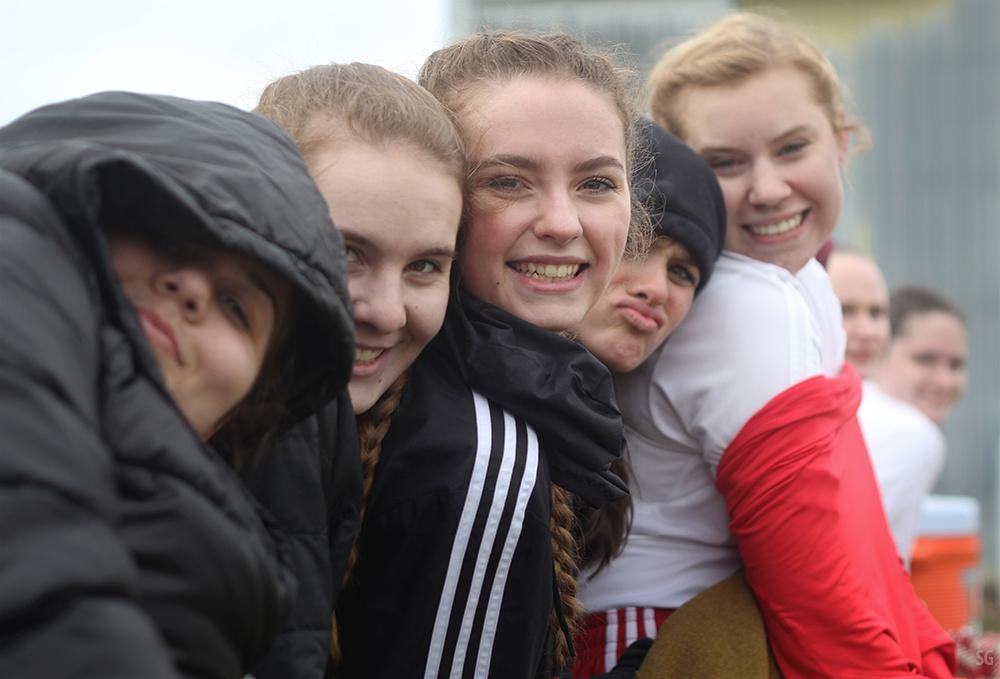 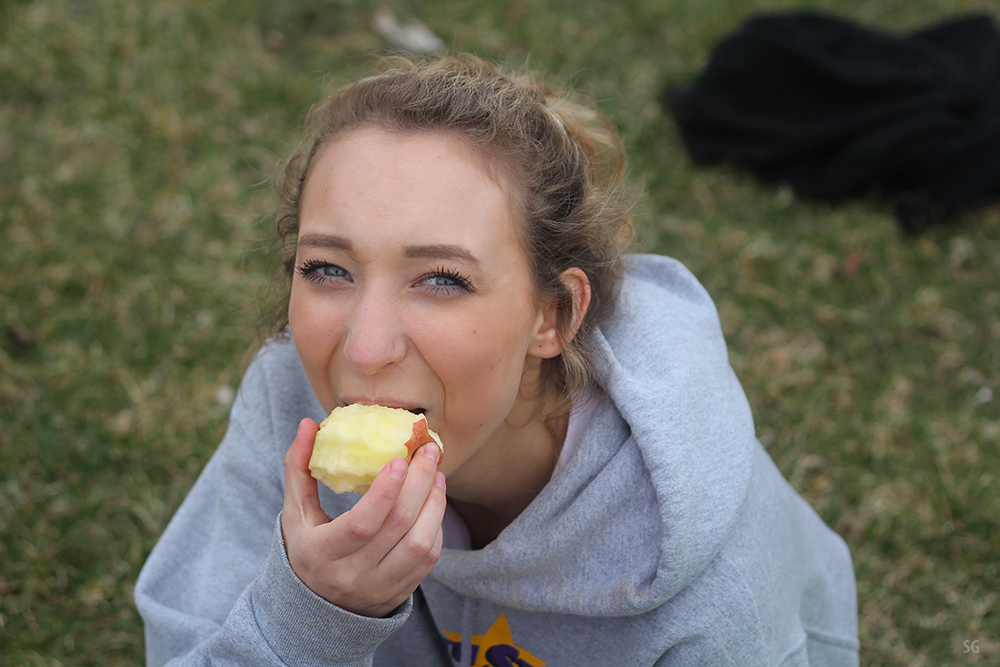 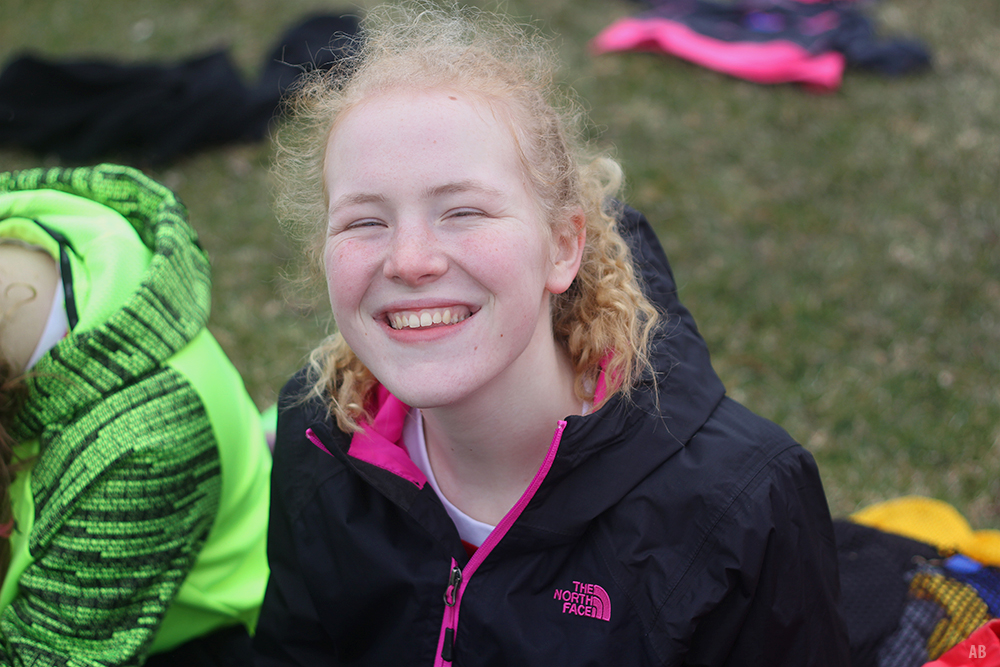 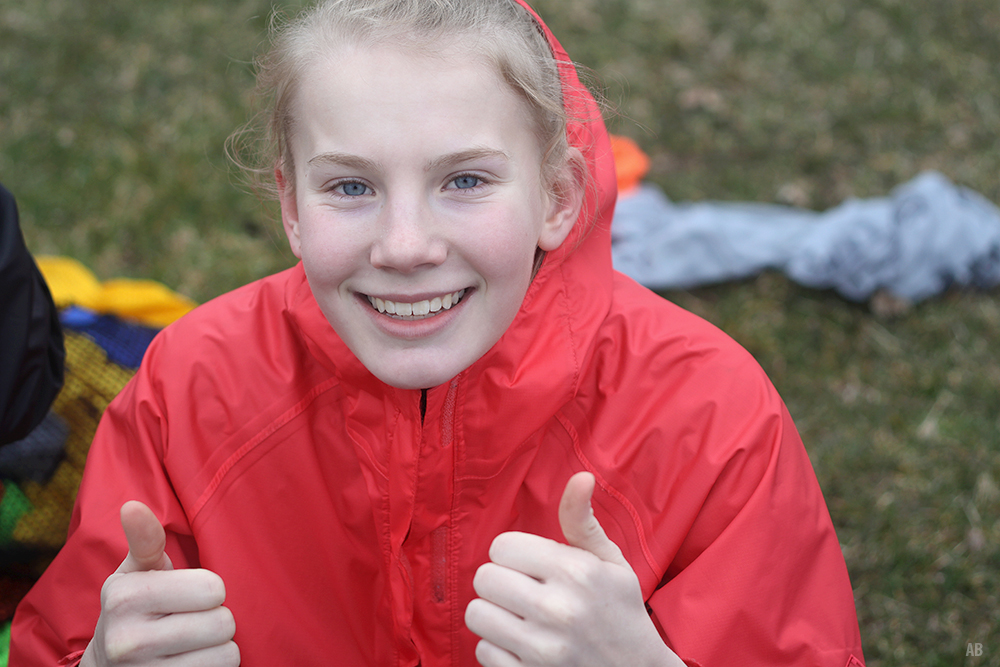 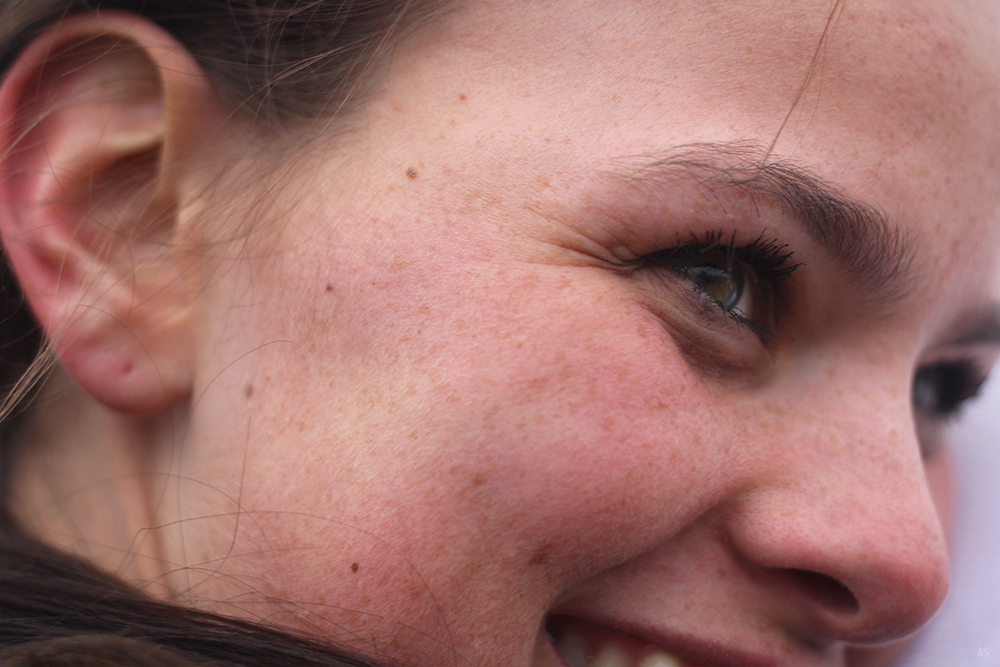 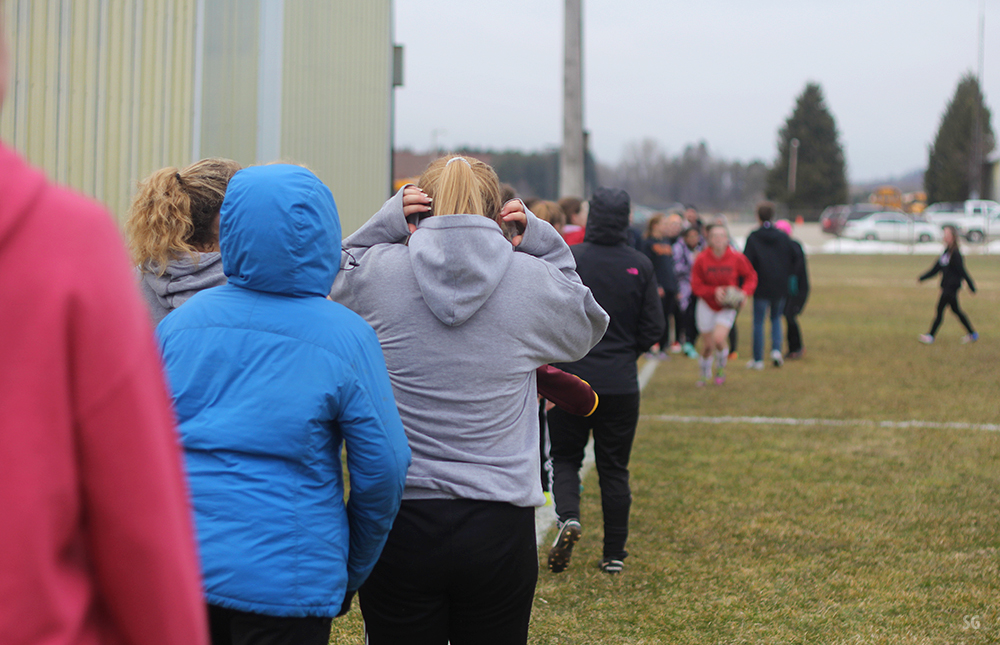 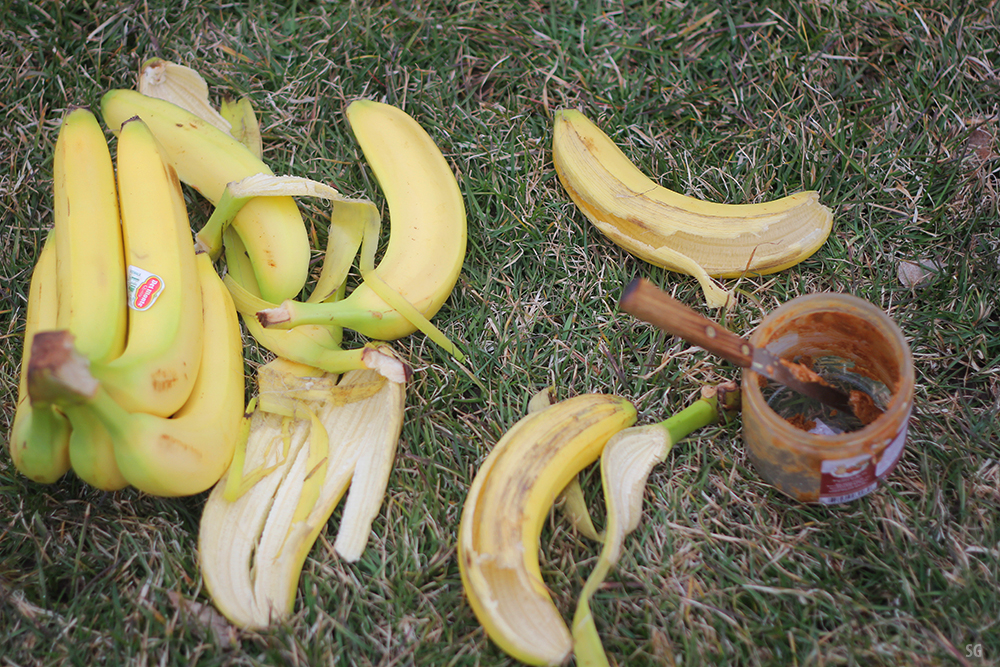 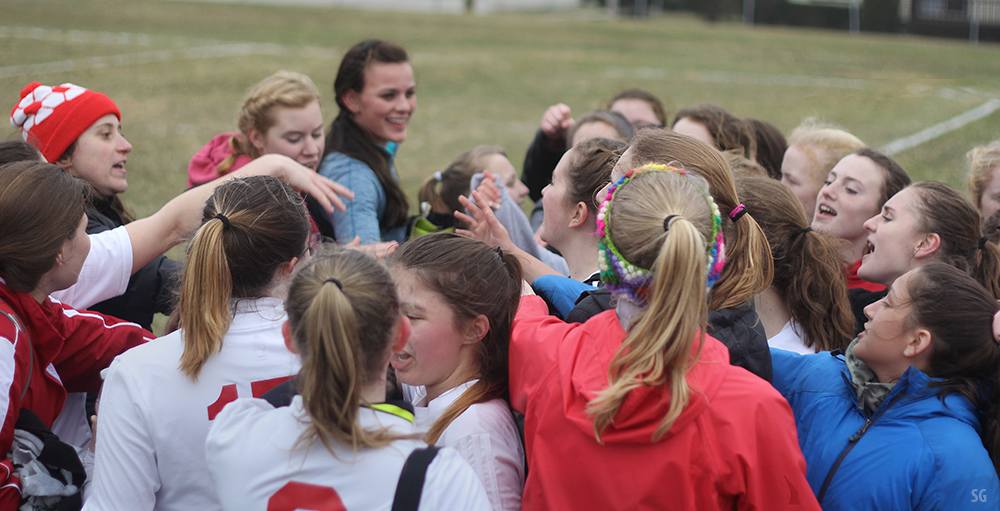