Life in a small town that is football crazy.

Have you ever seen Friday Night Lights, the TV show that aired for five seasons on NBC from 2006-2011? According to Wikipedia, the show uses a “small town backdrop to address many issues facing contemporary American culture, including family values, school funding, racism, drugs, abortion, and lack of economic opportunities… Though Friday Night Lights never garnered a sizable audience, it was a critical success, lauded for its realistic portrayal of Middle America and deep exploration of its central characters.”

Not only was the writing pretty good (well, if you skip most of the second season, that is), but the way that they filmed it is pretty interesting: like the 2004 movie by the same name (by the same producer/director, Peter Berg), the show was shot to look like a documentary, with strange camera angles and actual locations, rather than stage sets and a sound stage. Unlike traditional scripted TV shows, entire scenes were shot in one take with three cameras placed at different vantage points. Additionally, the actors were given a lot of leeway with their performances, meaning that they could change their lines, as long as they still hit the pivotal plot points. Moreover, hundreds of locals served as extras, giving the show an authentic look and feel — they actually filmed real games of the Pflugerville Panthers and used these as the game footage in the series, plus most of the uniforms, cheerleaders, and fans were “real people” from these games. The show even won a bunch of awards: a Humanitas Prize, a Peabody Award, a Television Critics Association Award, and several Emmy Awards and nominations.

Well, I could go on and on, but if you’ve ever seen that show, you can imagine life in my small town. Frankfort is a lot like that — the school colors and mascot are even the same — except that everyone has a nasally Michigan accent instead of a Texan drawl.

Jordan and I don’t go to a ton of home football games, and we’re probably the only people in town who can say that. (Seriously, everyone goes to these things religiously, like church on Sunday… yet another thing that we don’t attend, like seemingly everyone else does.) But even so, we manage to watch at least a couple of games each season. Last night, we went to the Homecoming football game (our second game of the year); Jordan wanted to go a little early to tailgate and because they were honoring the state champion teams from the 1990s, including the 1991 team that his brother, Ben, played on. By the end of the night, the Frankfort Panthers played (and beat) the Glen Lake Lakers. Both teams are ranked within the top five teams in the state for their division, and you can find local coverage from the Traverse City Record-Eagle on the match up here, if you’re interested in the play-by-play coverage.

As for me, I do a lot more people-watching than game-watching. I don’t know if it’s because I loved how the TV show was filmed and so going to these games reminds me of that or if it’s something else, but I just love photographing the people who attend these games — it really is Americana Rust Belt at its best.

Just like the idyllic, iconic town in the TV show, you can hear the announcer from our house. We walk the 3.5 blocks to Lockhart Field on streets with few cars and fewer people. The closer that we get to the field, the more cars that are lined up on both sides of the street, making us glad that we walked instead of drove, avoiding the fight to find parking. The trees are just starting to turn colors. There is a slight chill in the air, so you want to wear jeans, a sweater, a scarf, and a puffy vest. Maybe a hat. Most people at the game are donning something purple and gold. There’s also a lot of painted faces and people carrying balloons. There is tailgating right on the practice field, where you can buy a brat, homemade french fries (nom nom nom), coleslaw, a soda, and your choice of baked good, all for just $5. Grapevines that are beginning to change over from dark green to a deep red hang over the chain-link metal fencing of the practice field, where kids in hoodies are running around, just to the south of the game field. A couple dozen signs — each with a player’s name and number — are on the other side of the grapevine-lined fence, along the main road into town, beckoning people in to watch the game. Many storefronts downtown have closed up early but will re-open for post-game patrons looking for a late-night snack.

There are more people at the game than can fit in the ‘home team’ bleachers, so a few spill over to the north side of the guest bleachers, just below the box where the announcers sit and just above the concessions where buttery popcorn and cheesy nachos are being served up. The gleam off the gold pom-poms mirror the glint in the eyes of the high school band, playing a series of short riffs on shiny brass instruments with a strong drum-line beat. Even more fans can be found standing all along the field, even sitting along the end zone on a blanket beneath the yellow field goal. A small child sits on Daddy’s shoulders to get up above the crowd. A copper-plated plaque on the ground bears the name of a beloved coach who took several seasons worth of players to state final matches. (Read more about “Coach” in this article from The Betsie Current.)

Below, you will find my favorite photos from the 2016 Frankfort Homecoming football game at Lockhart Field. 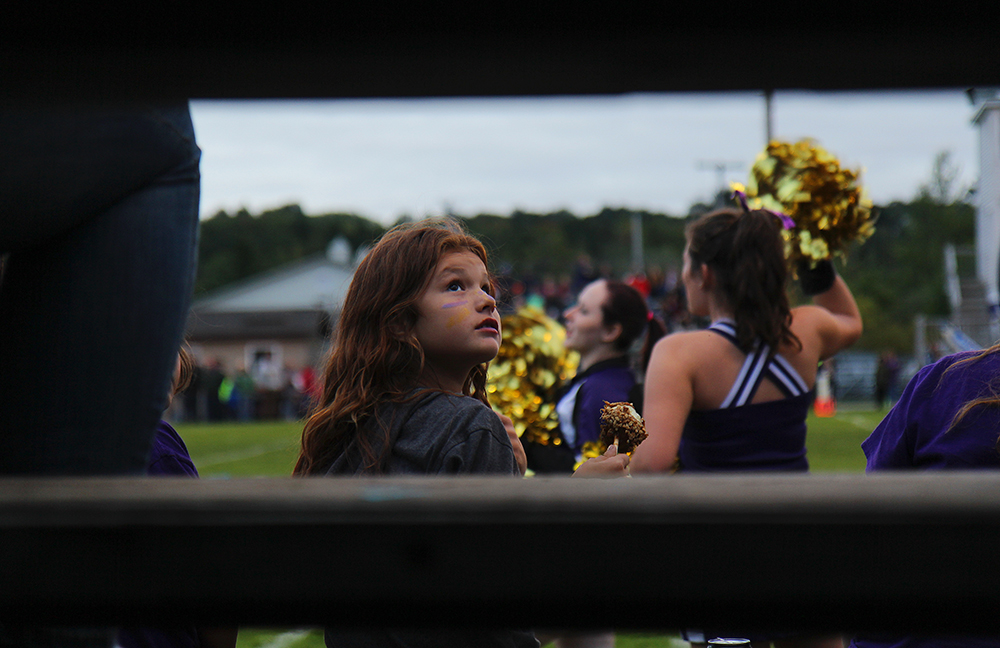 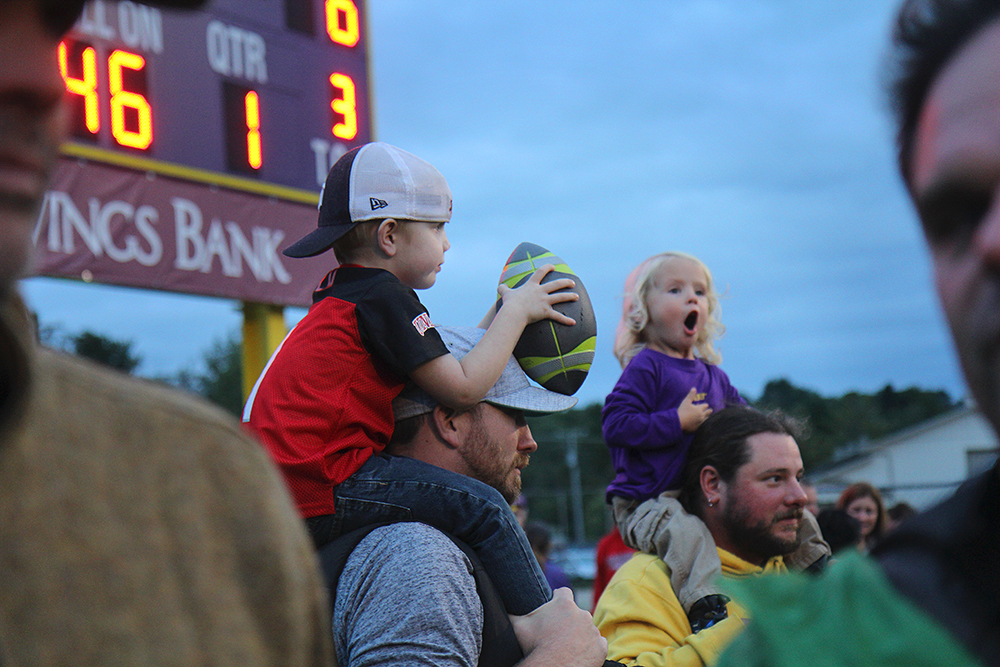 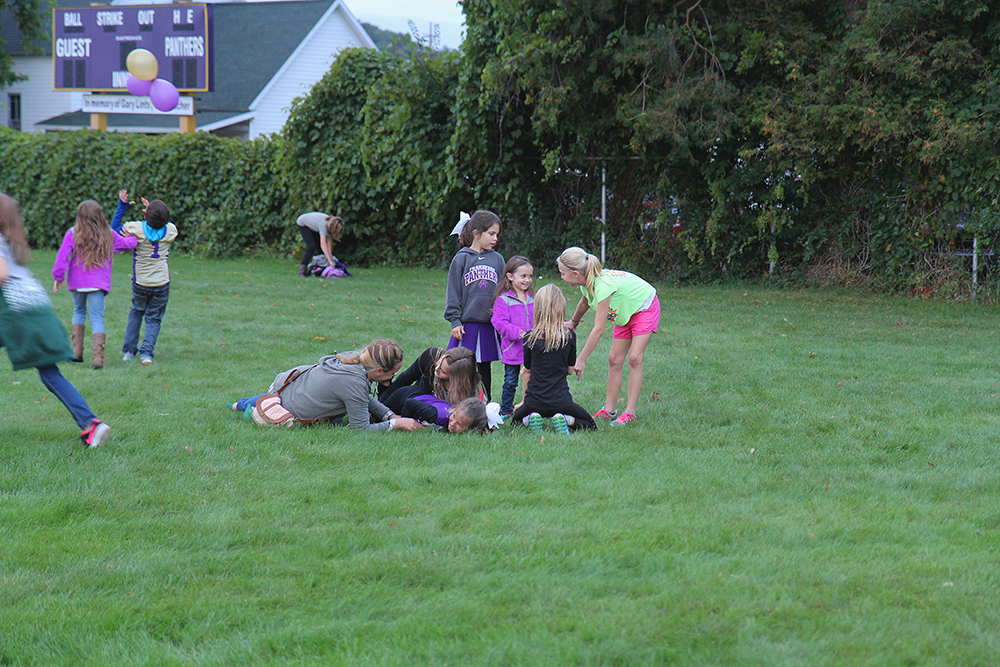 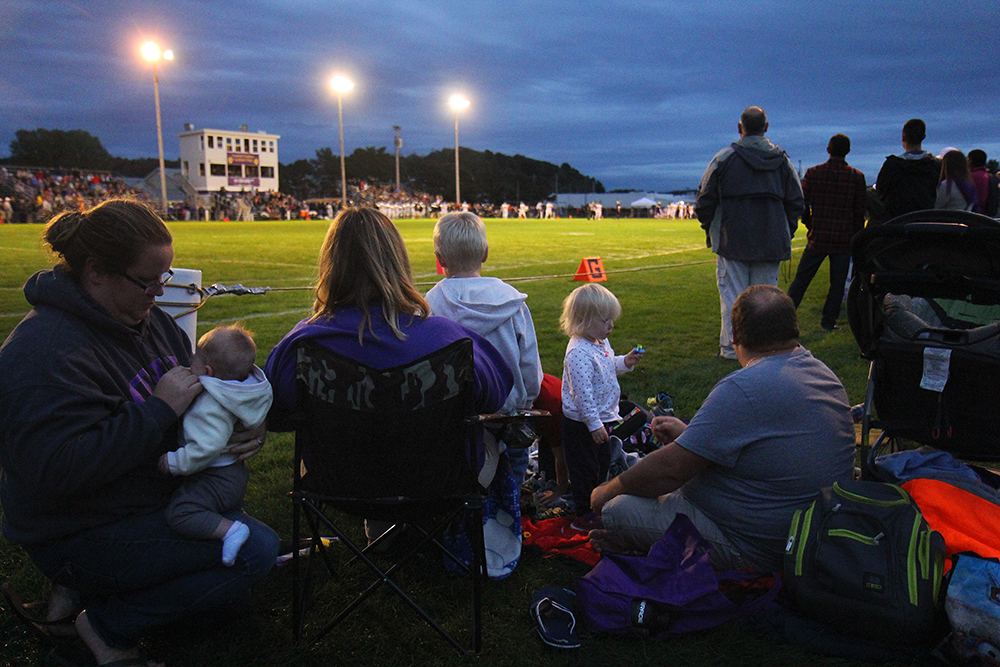 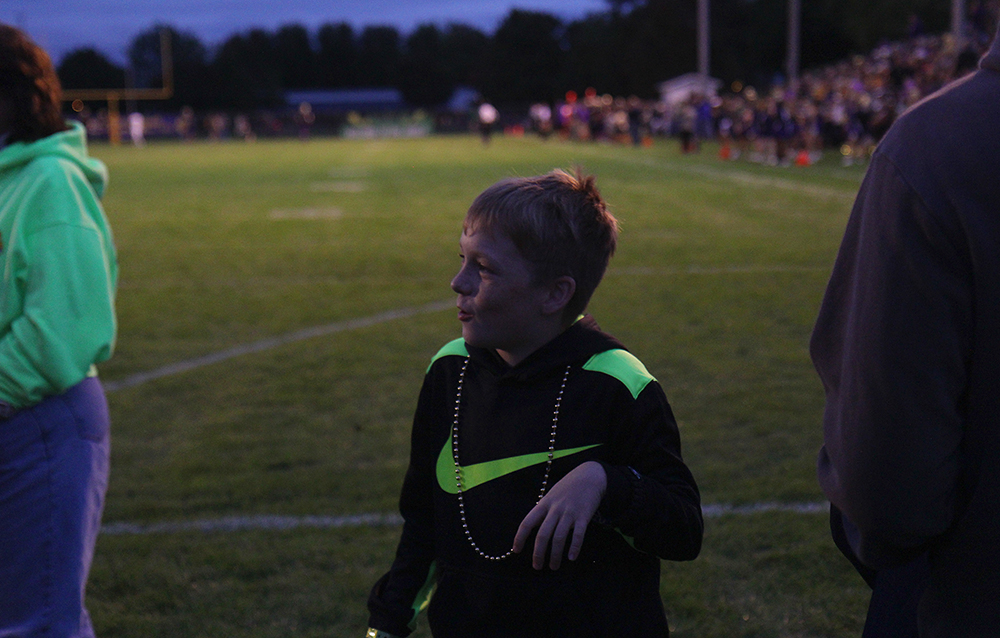 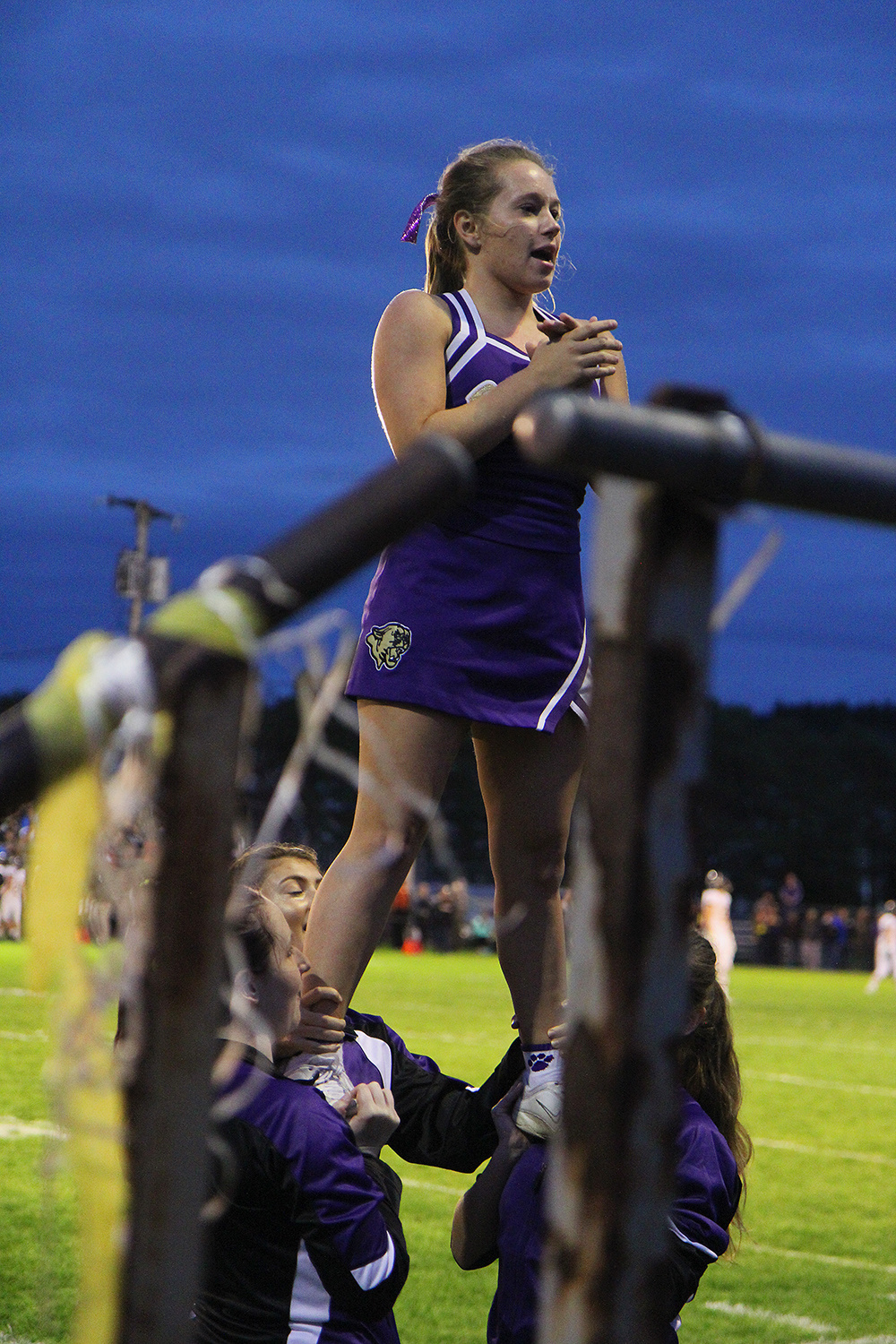 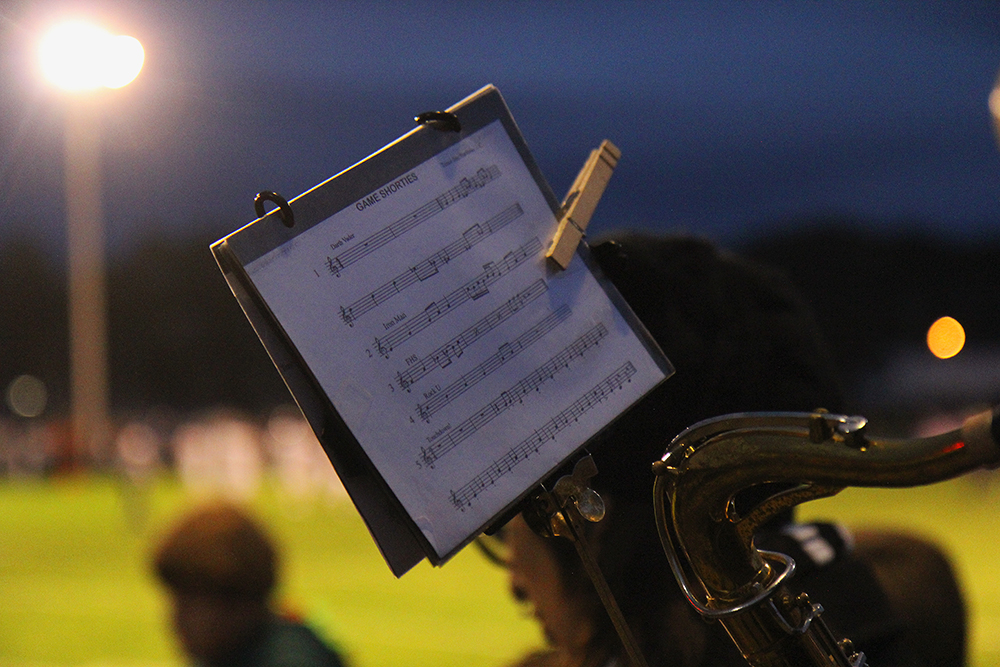 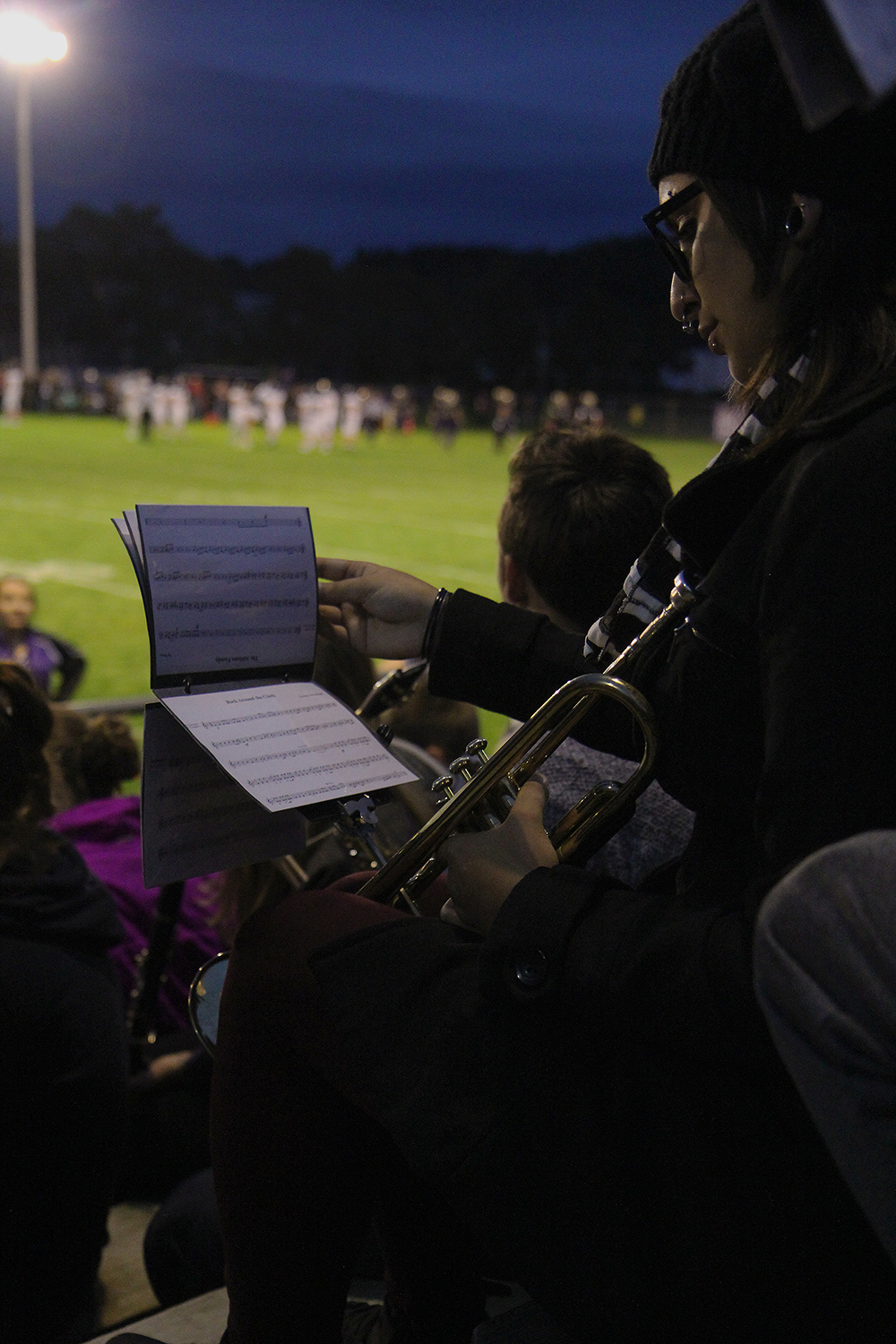 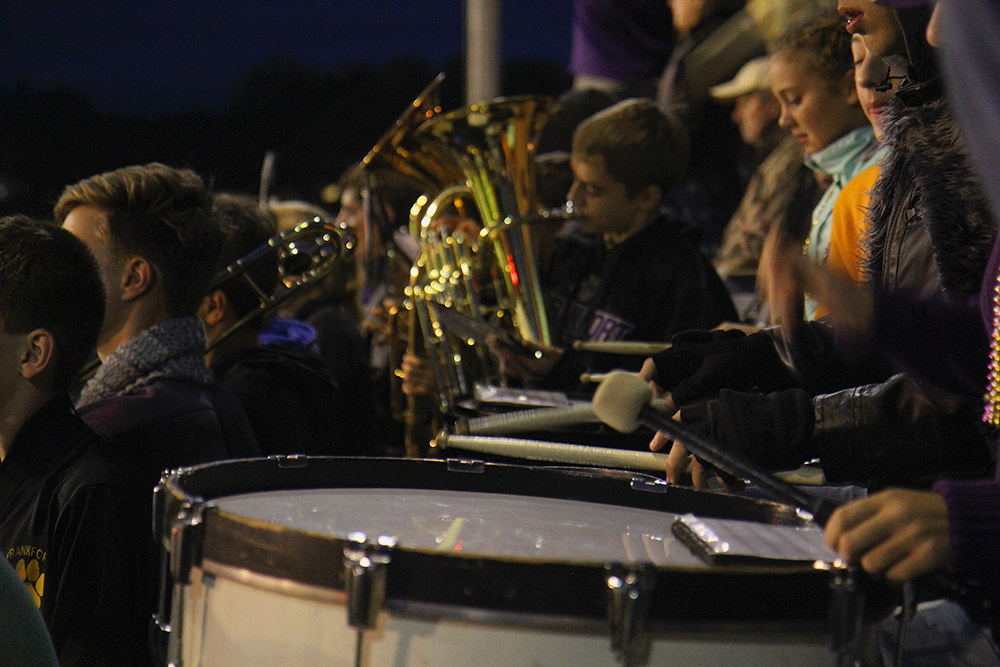 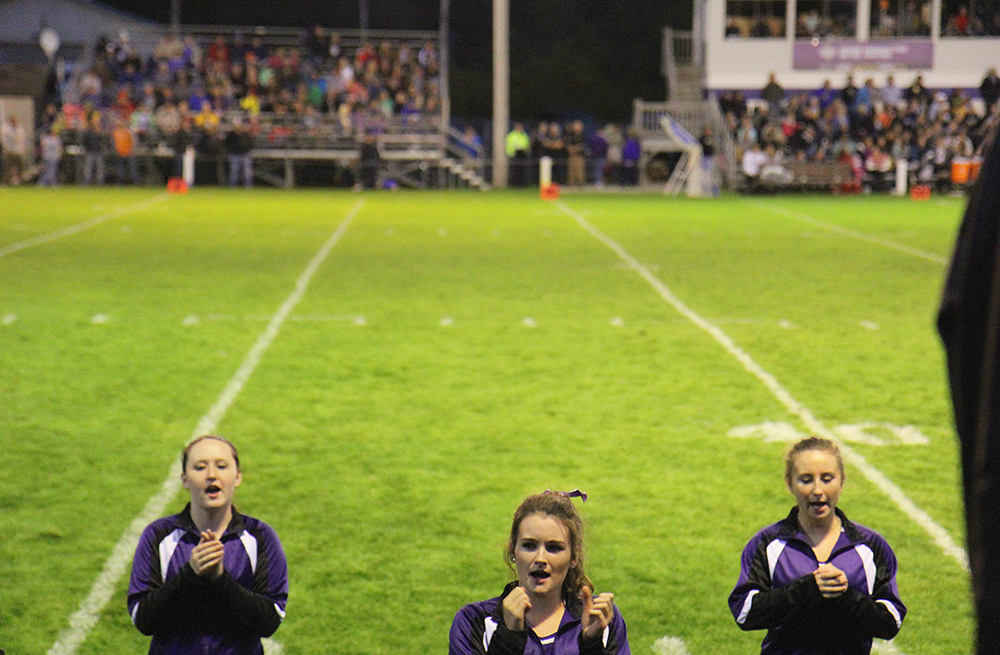 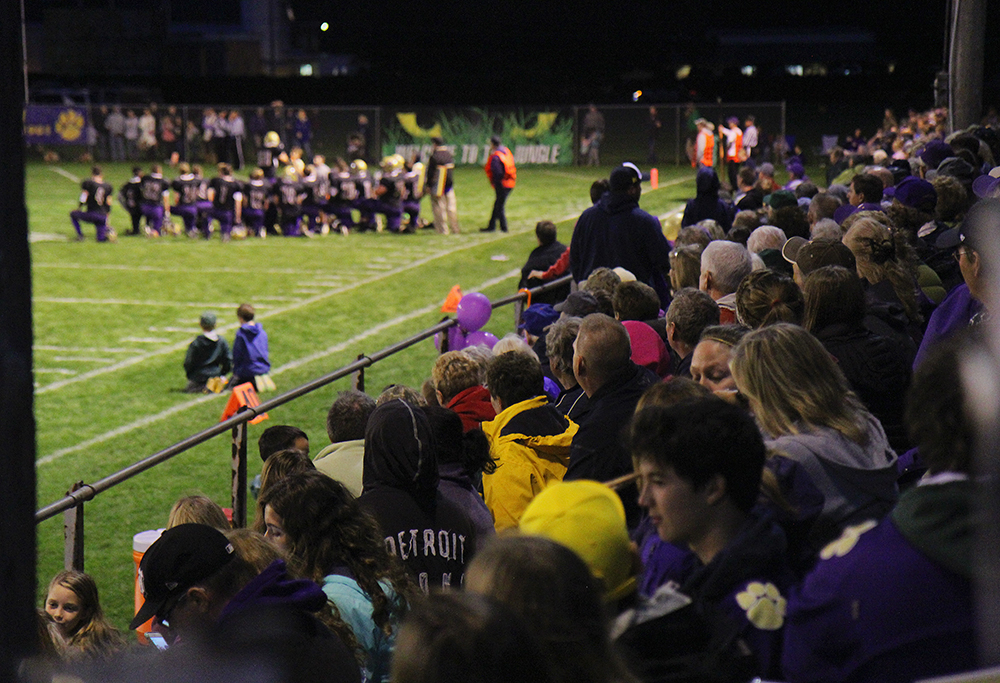 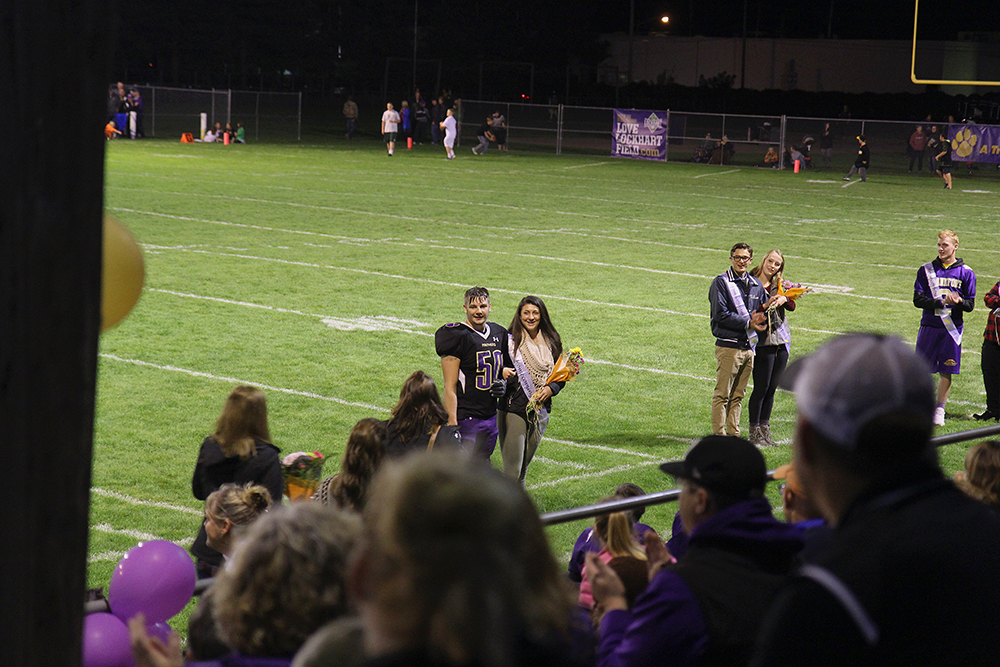 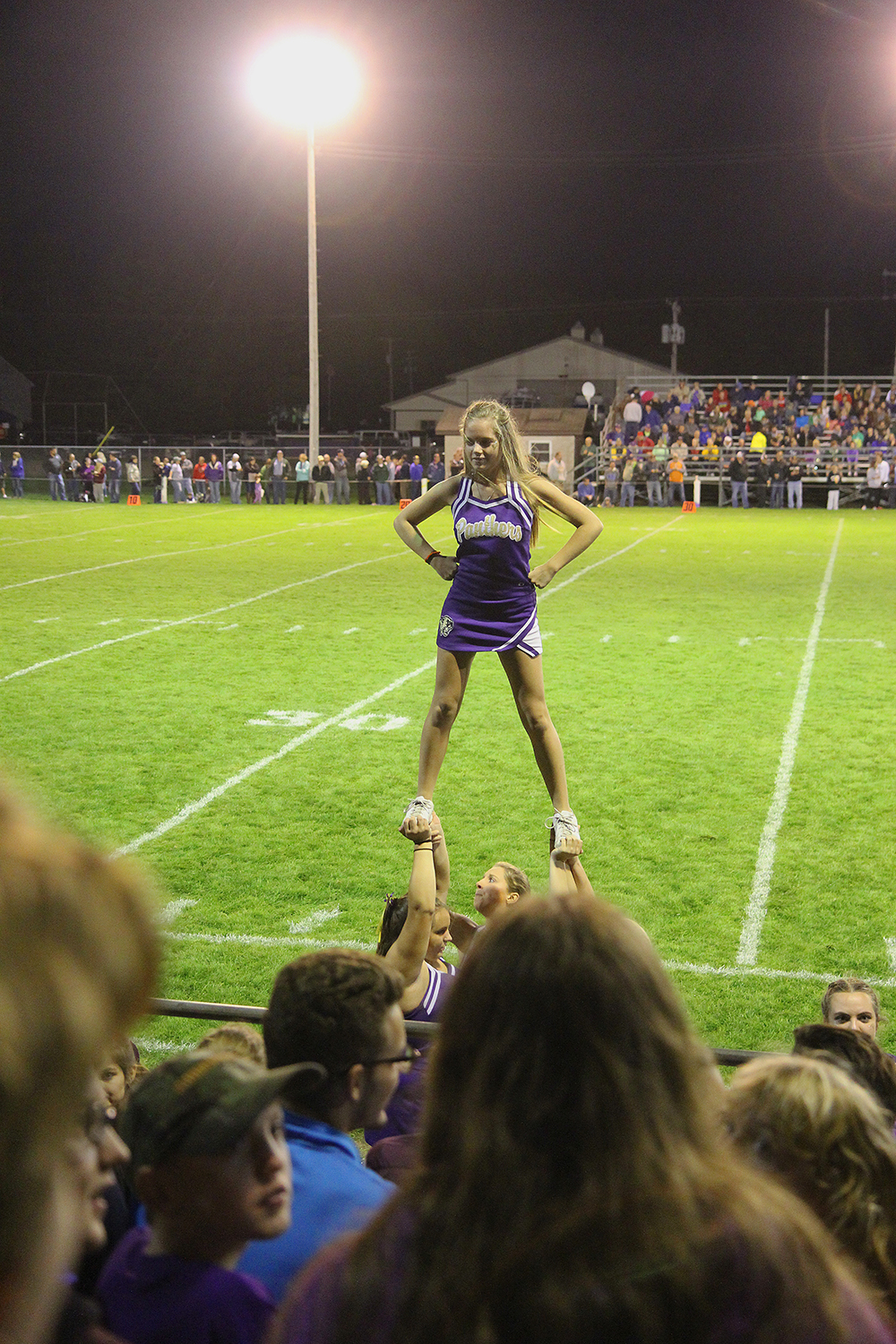 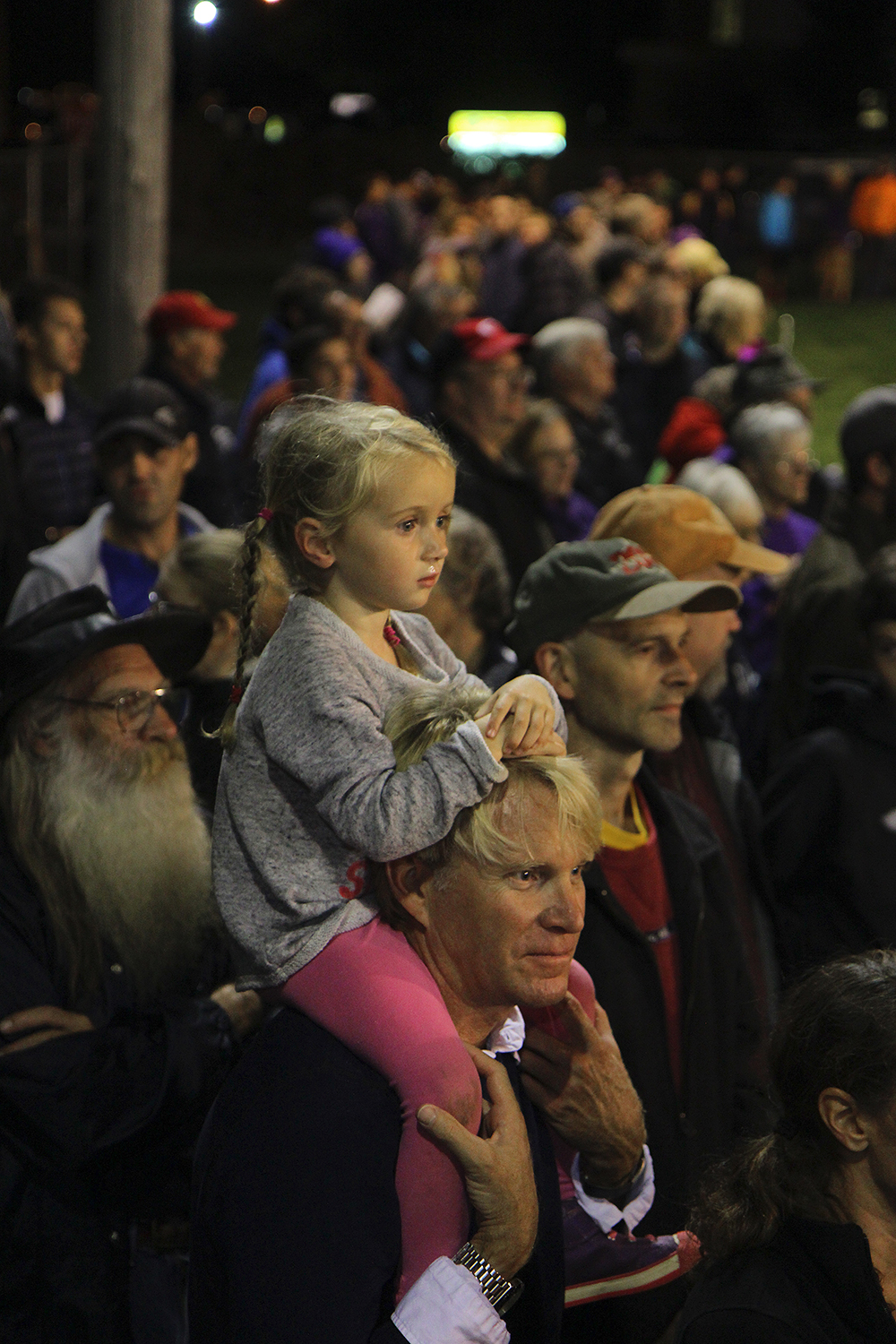