Nora and I share a couple of best friends. Though Nora and I met our freshman year at Kalamazoo College, it wasn’t until we got back from foreign study that we became friends ourselves. You see, I had studied abroad in Ecuador with Nora’s good friend Rachel Brainerd; Nora had studied abroad in Thailand with my bestie Quinn (you may remember Quinn and Josh’s winter engagement session from my blog back in 2014). So I heard all about Nora from Rachel while we were in Ecuador, and Nora heard all about me from Quinn — when we got back from foreign study, it was like we all knew each other, even though we hadn’t ever really hung out. And thus, Nora and I became friends. A lot of relationships at K College happen this way, which is curious, but also very cool.

The next year, in the fall of 2007, Nora and I (plus Rachel) ran on the cross country team at Kalamazoo (I had previously played soccer, but they’d been running since freshman year), and that helped to solidify our bond. Not to mention when we were both in Quinn’s bridal party in 2015 — what a riot that was.

But this isn’t about my relationship with Nora; it’s about her relationship with Joe. They got engaged in April. They’ve been together since both were living in Chicago, but they moved to New Orleans about a year ago, so that Nora could get her Master’s in nonfiction/creative writing from the University of New Orleans. Nora is originally from St. Clair, Michigan, and she studied English/creative writing at K, and then she went to work for Chicago Teaching Fellows for several years. Joe is from Chicago originally, but went off to study political science at the University of Iowa, before returning to Chicago for his Master’s in education through the Academy for Urban School Leadership; Joe now teaches Freshman English at Cohen College Prep in New Orleans.

Nora and Joe are getting married in October down in Kalamazoo (actually, in the chapel at K College, which is neat), and they asked me to be their wedding photographer, so I’m super excited to do that this fall! We decided that it would be a good idea for me to get to know Joe (I had never met him before) and for both of them to get used to me pointing a lens in their faces before the big day, so we set up a date for an engagement shoot earlier this summer. Nora is spending the summer at fellow K alum Mariah (Frye) Colie’s place down in Higgins Lake (her parents own Cross Country Ski Headquarters, and she and her husband, Stuart, have basically taken over the operations — oh, and Mariah has won the Vasa 50K for the past two years in a row, because she’s effing baller). Mariah and Nora are teaching yoga all summer in Higgins Lake (because that’s what you do in the summer when cross country trails aren’t operational, duh), and Joe drove a full 19 hours from New Orleans to spend some time with her earlier this month — then he basically hopped immediately back in the car so that they could drive another hour to meet me for their engagement shoot. Haha, poor Joe. #buthesjustsoconsiderate

Since they’re both literary buffs and Joe isn’t much of a “nature guy,” we took their engagement photos in the most urban place that Northern Michigan has to offer — downtown Traverse City. We started on the street outside of The State Theatre (Wonder Woman was featured), then took the tunnel under Grandview Parkway to the Clinch Park beach, where we took some photos of them reading their favorite books (The Bell Jar by Sylvia Plath and Invisible Man by Ralph Ellison). Then we headed to Horizon Books to take some photos after the sun had set. All in all, it was a super fun time just hanging around with this couple, because they laugh — a lot. Can’t wait to be part of their big day this fall, as they’ve got some really fun things planned!

So here they are — the best photos from my summer engagement session with Nora and Joe in Traverse City! 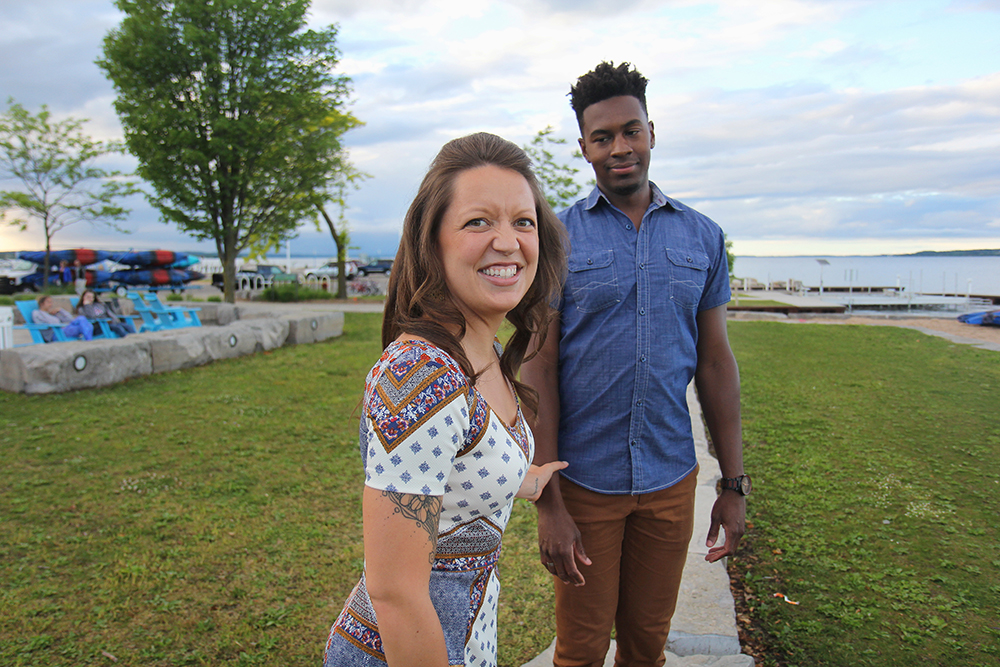 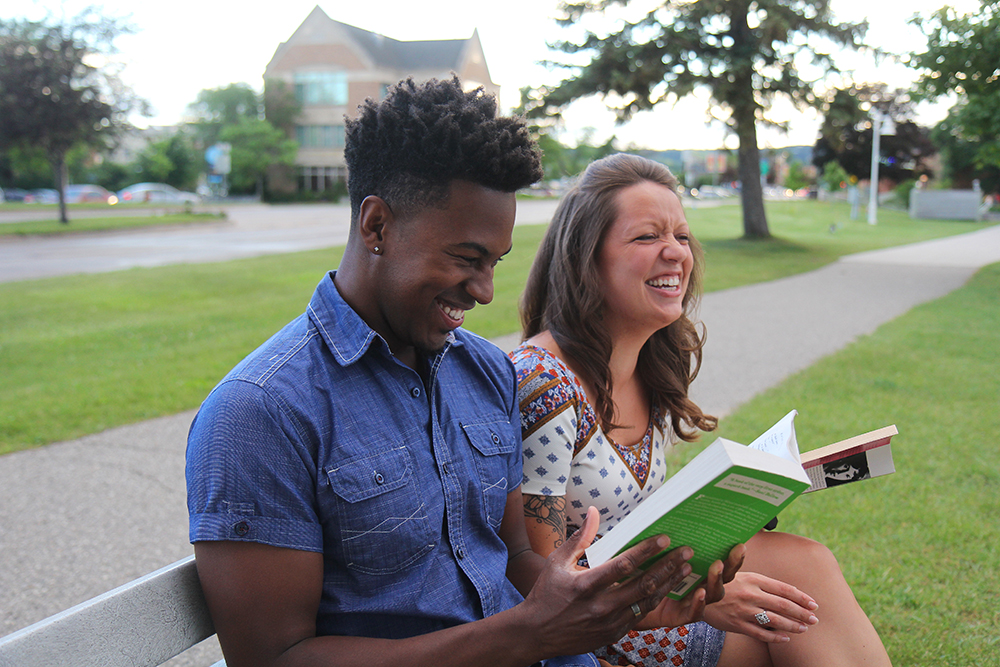 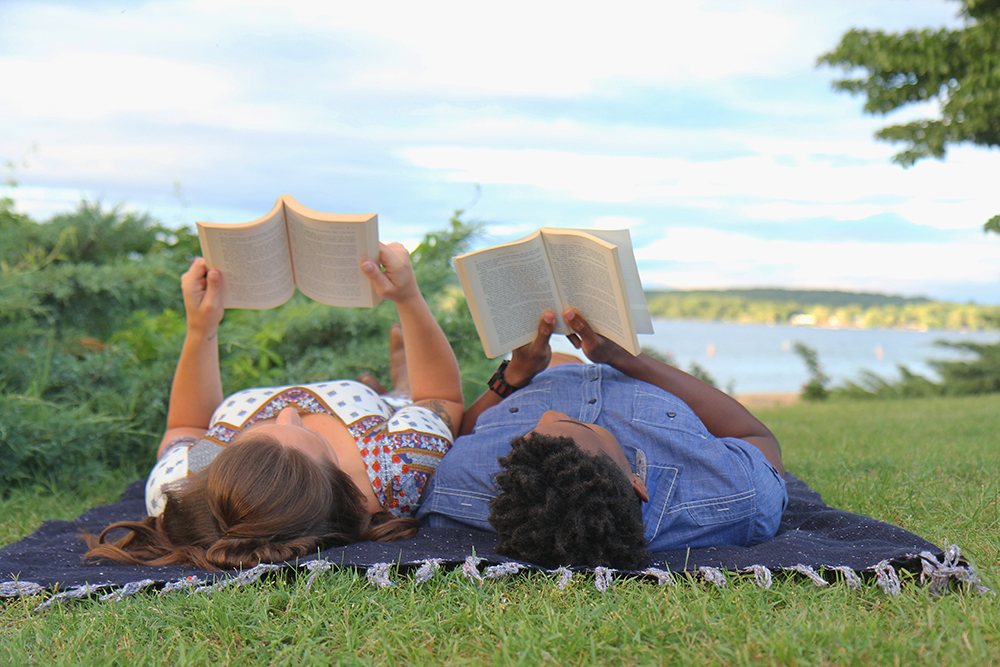 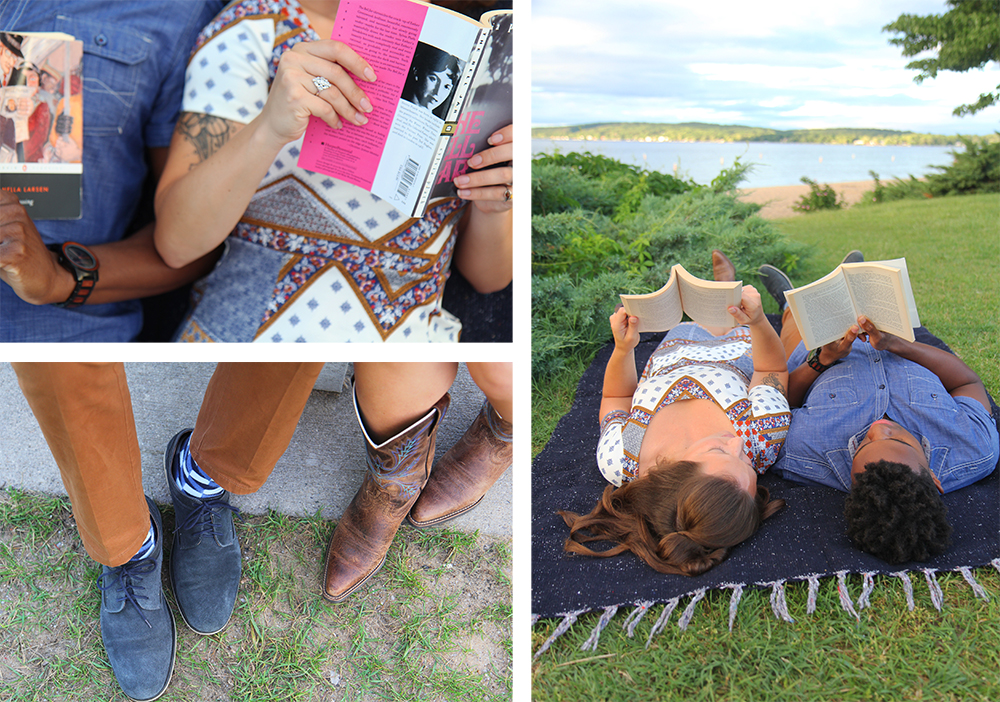 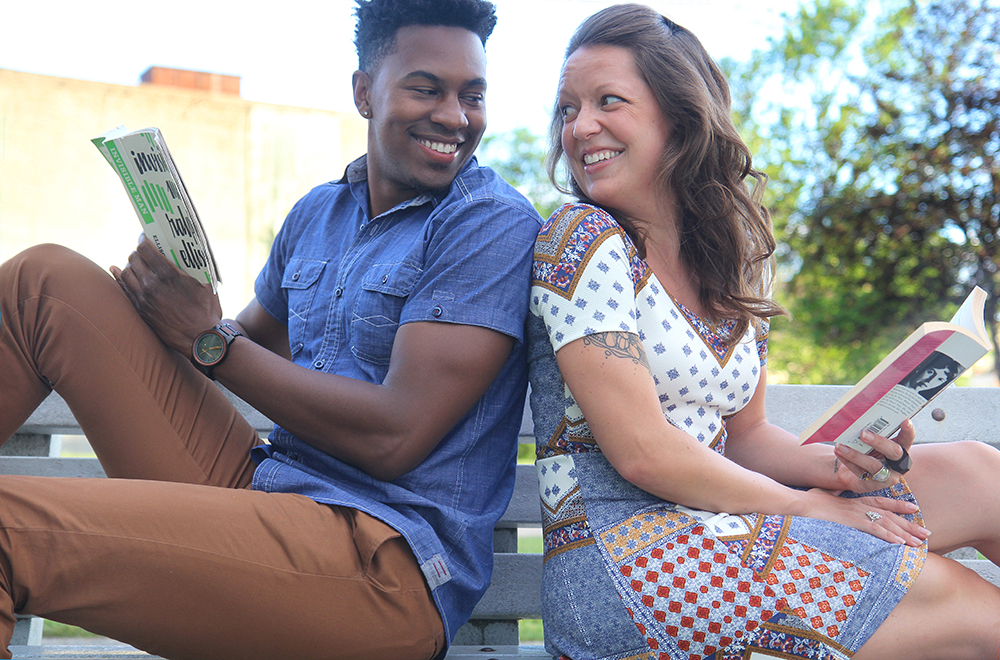 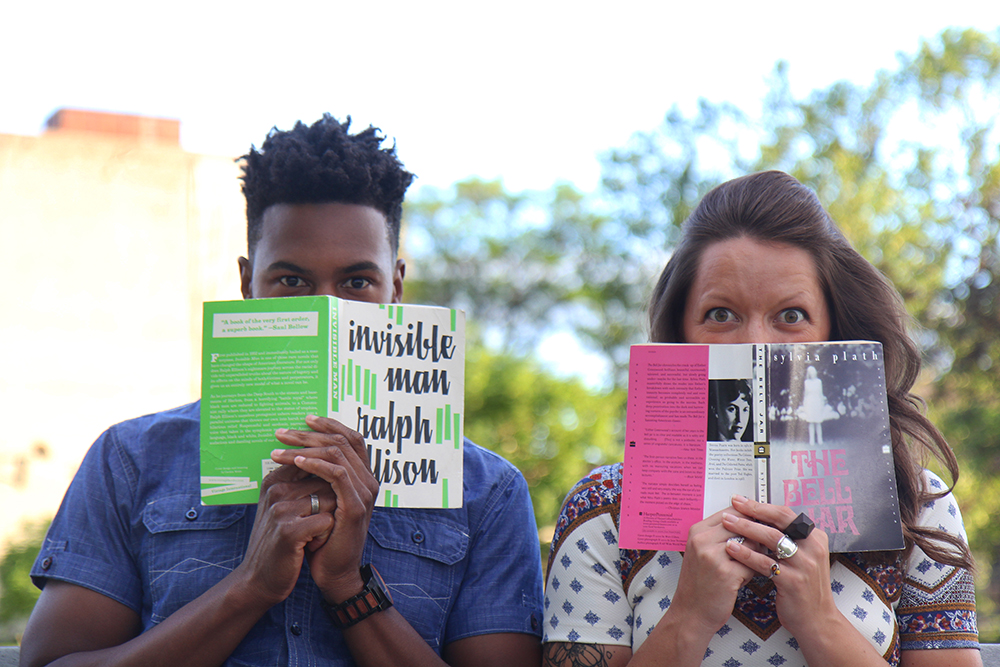 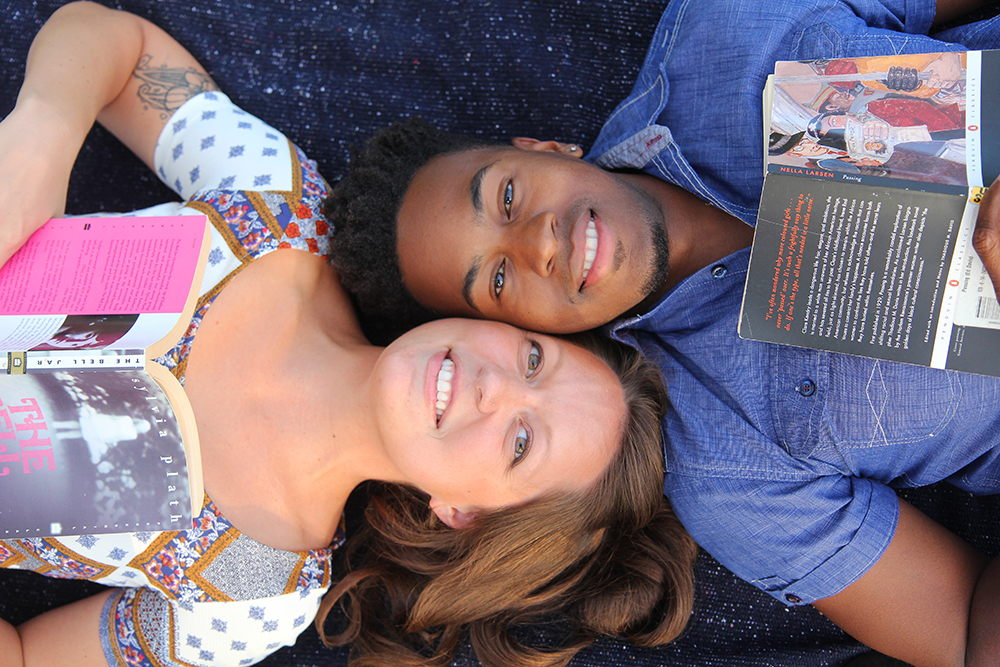 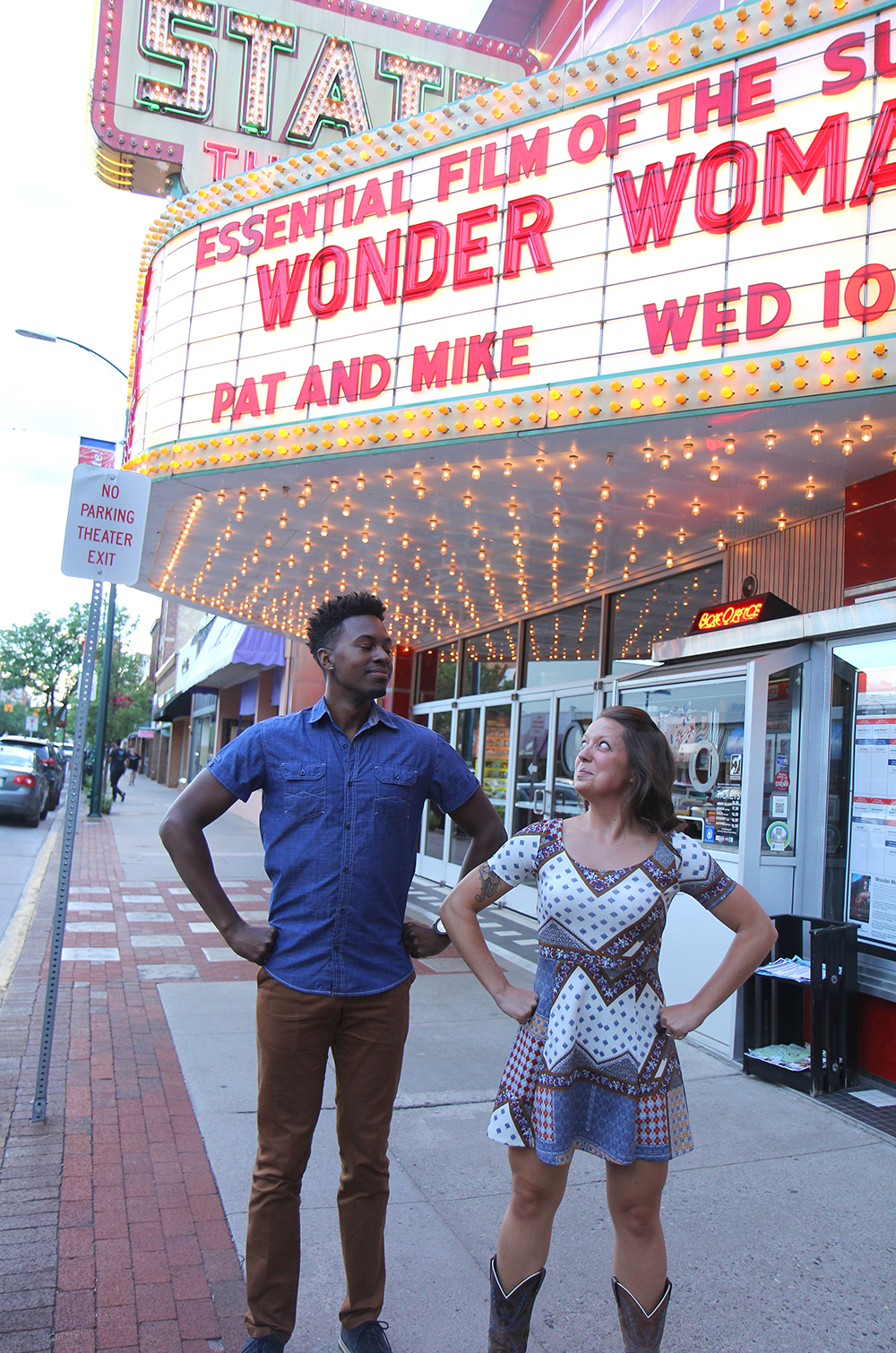 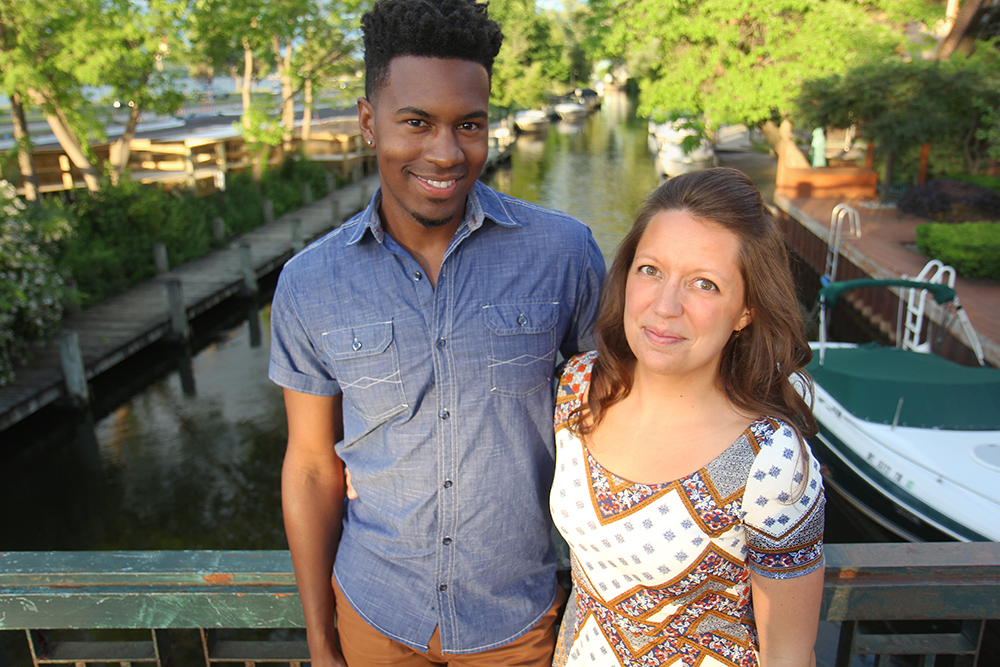 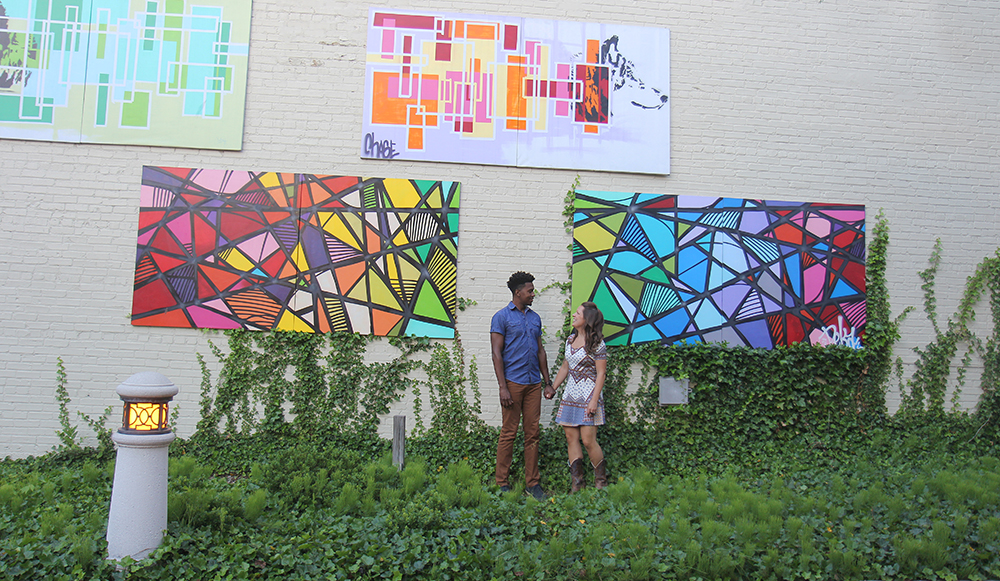 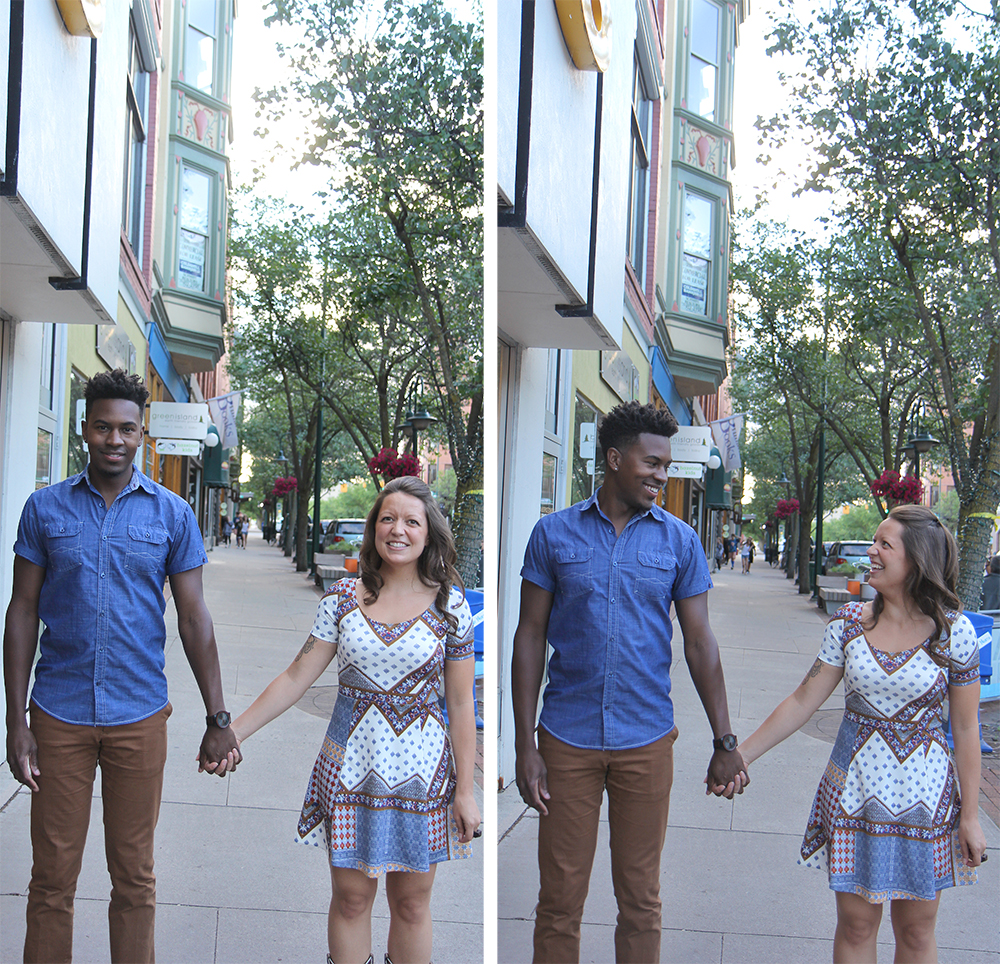 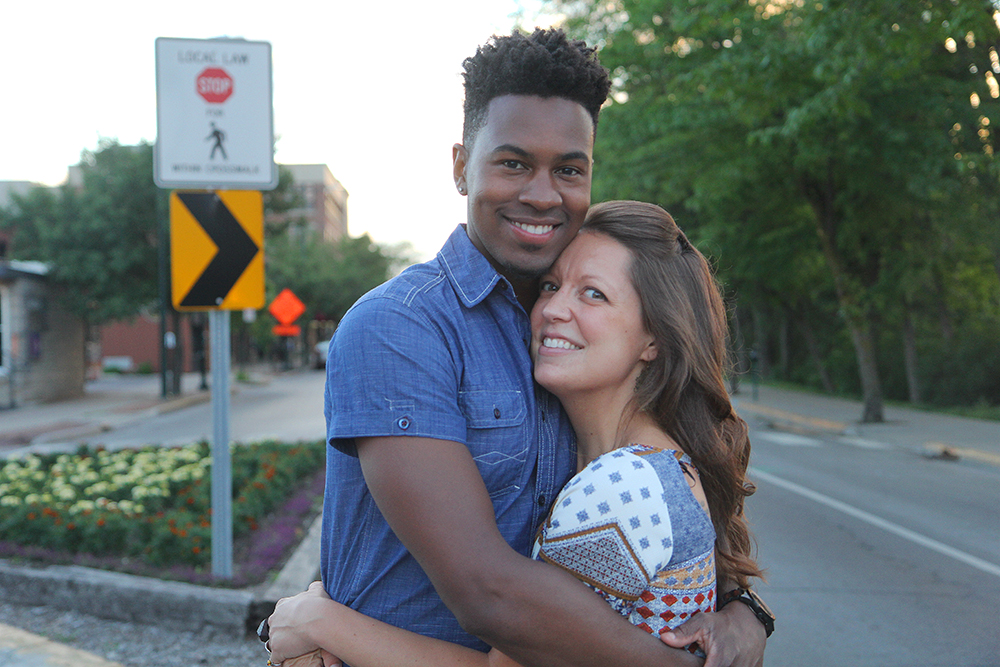 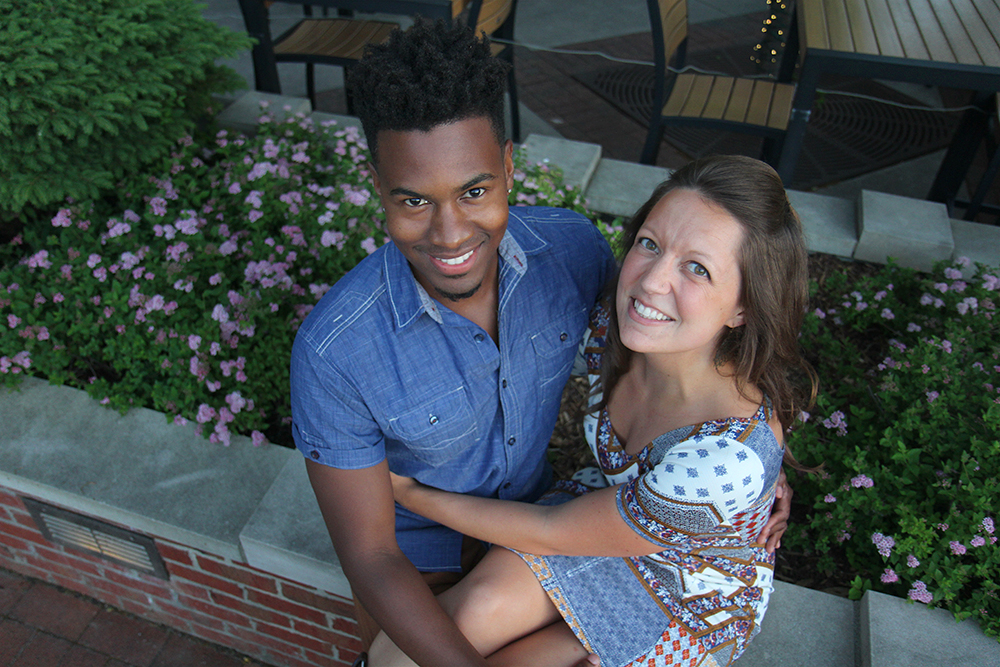 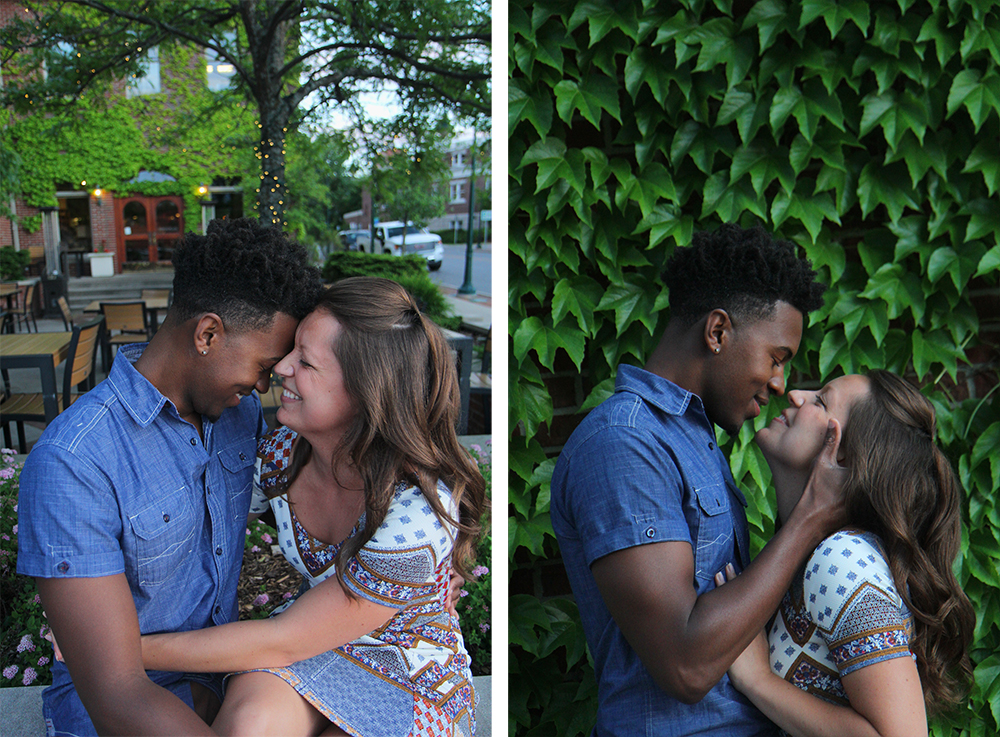 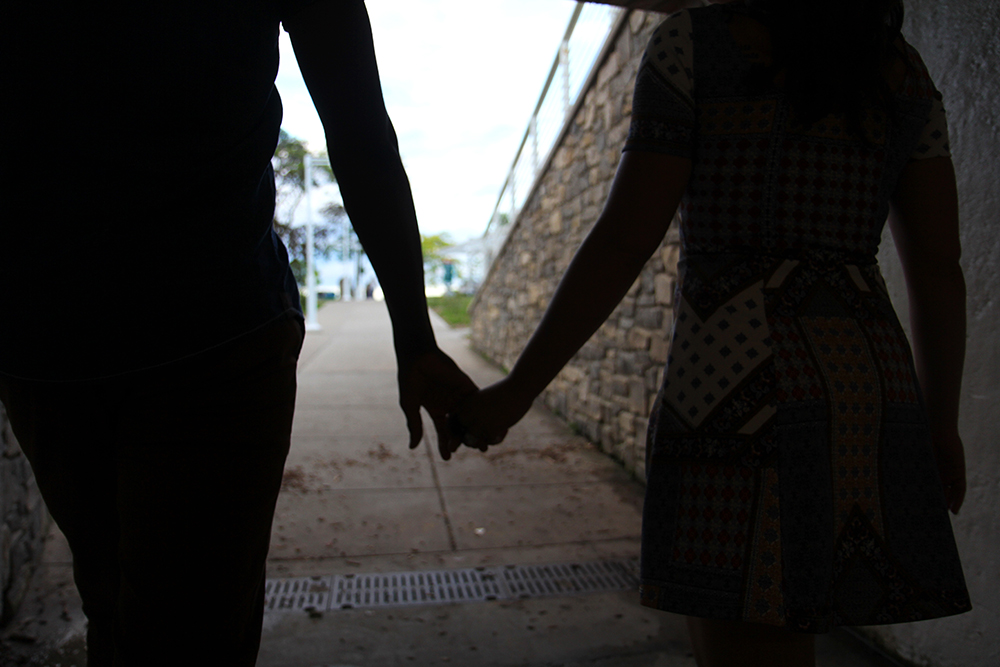 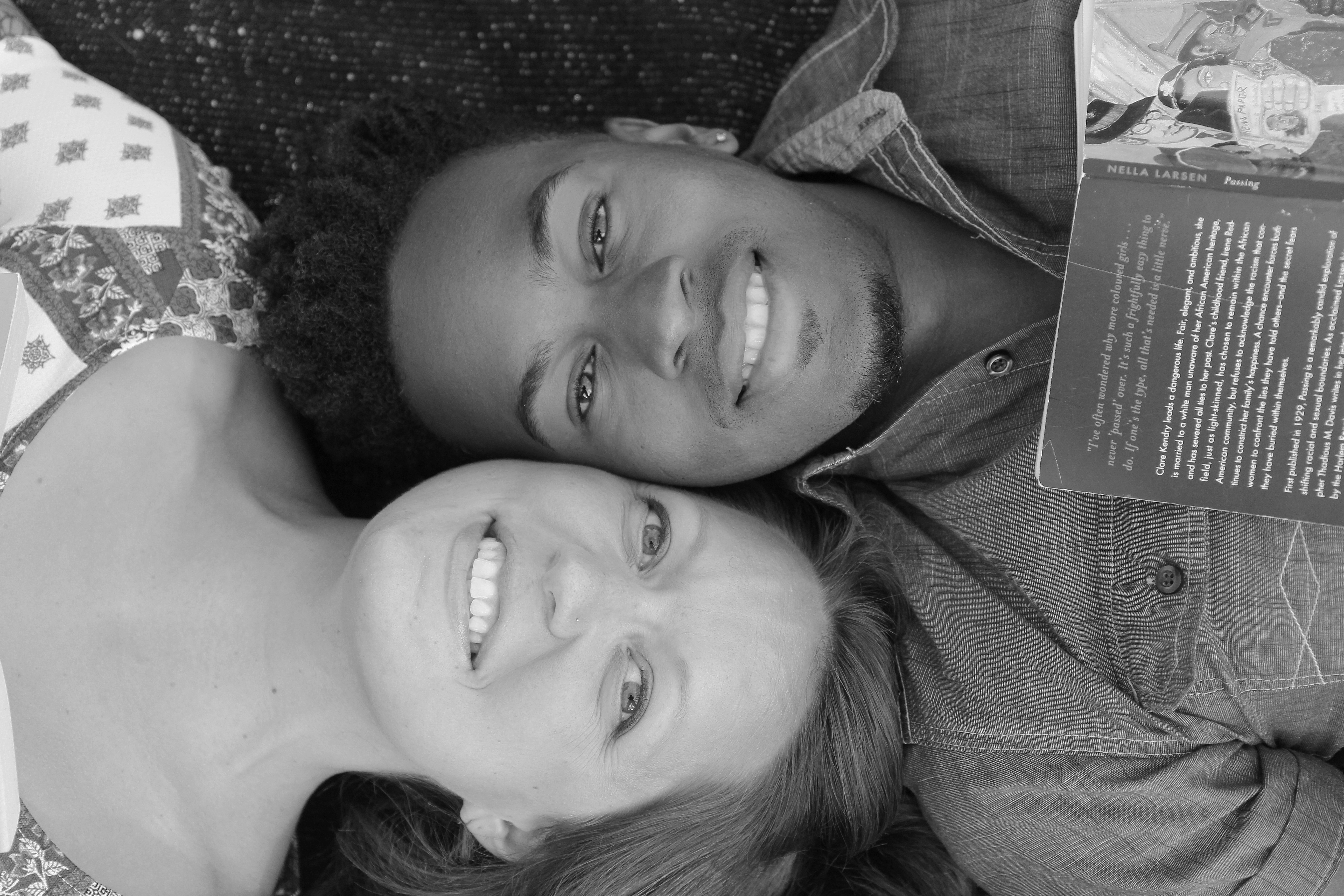 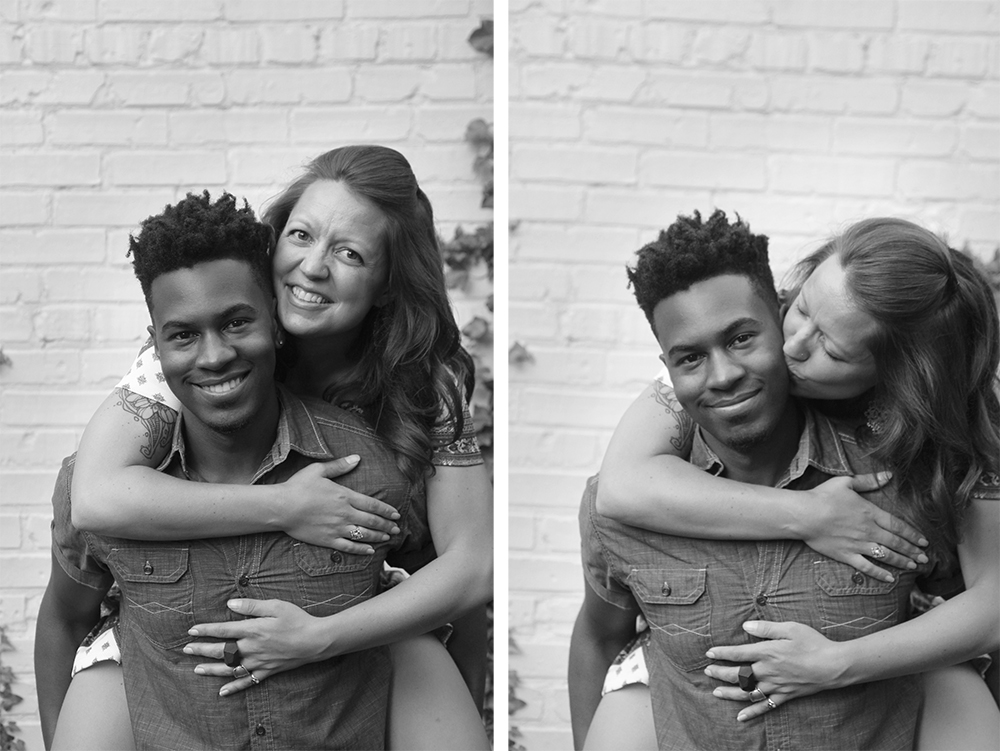 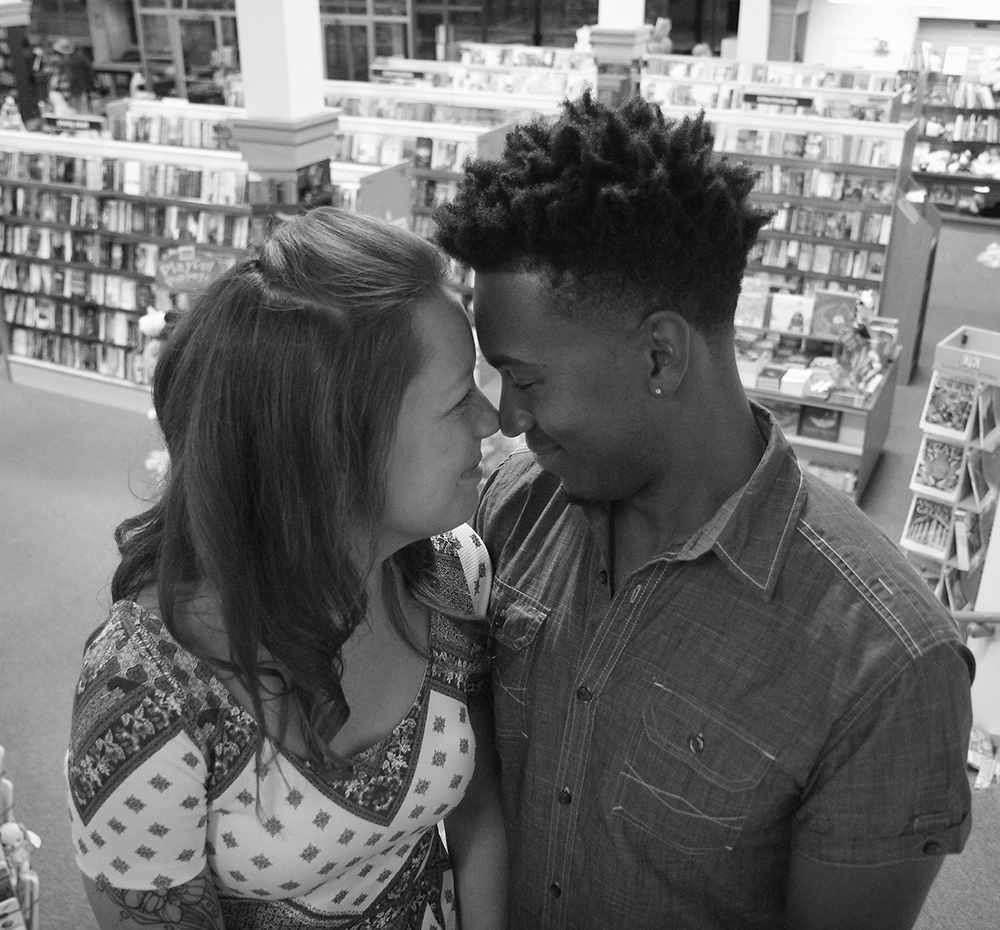 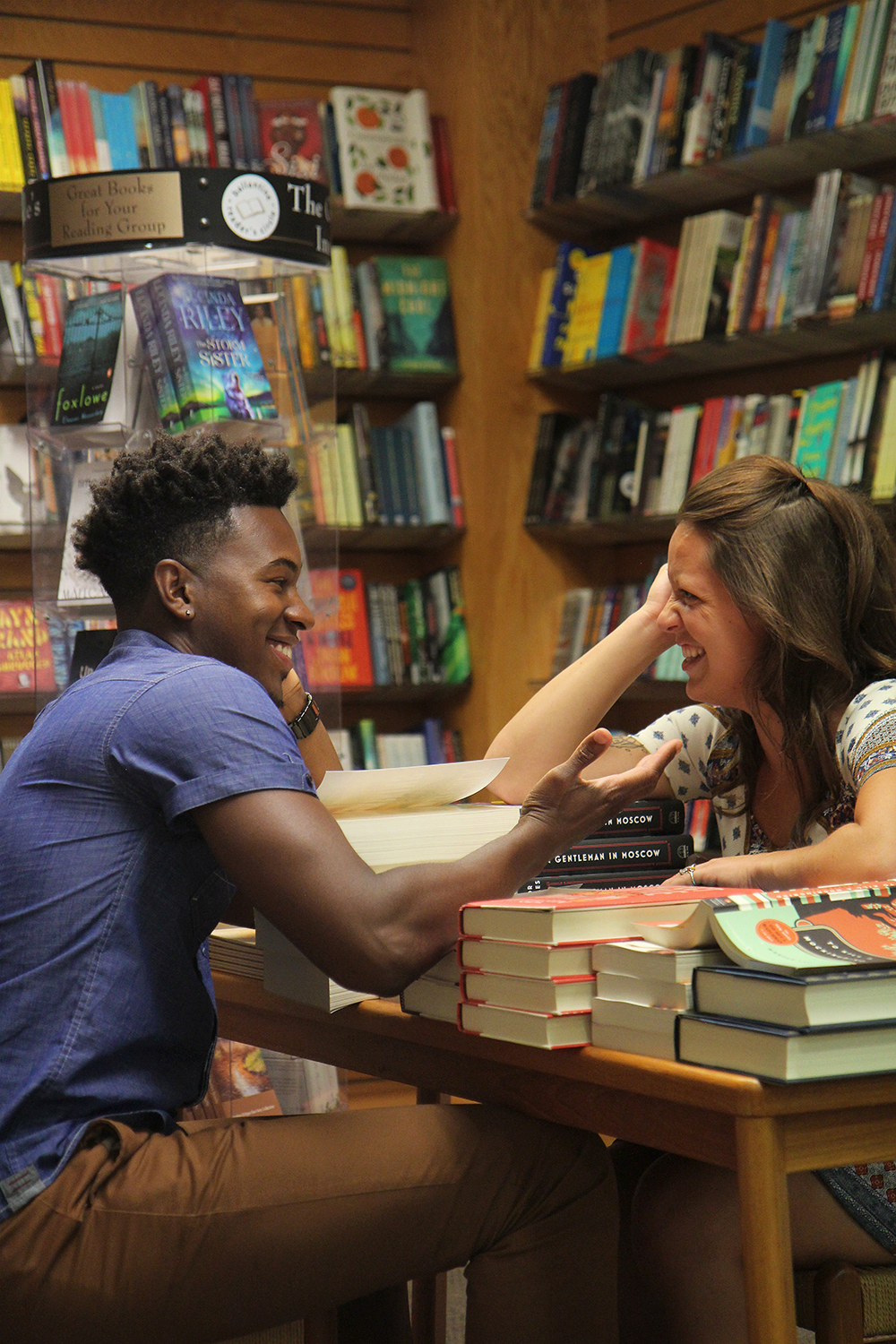 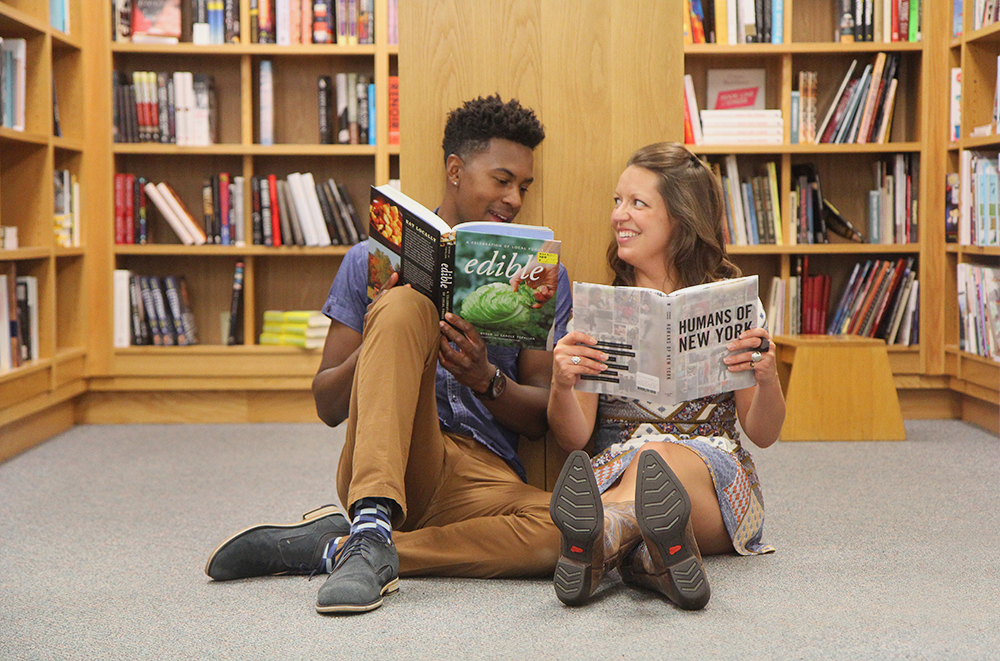