I first met Lauren Church a few years ago, when I started helping out as assistant coach to the Benzie Central girls’ varsity soccer team. My first interactions with Lauren were mainly saying, “Hi, thanks for coming,” at the end of a soccer game, since Lauren is the older sister to Maile Church, our goalie, who is a junior right now.

But since then, I’ve gotten to know Lauren, and the Church family as a whole, much better, and not only through soccer interactions — as it turns out, Will Church (Lauren and Maile’s dad) grew up just down the street from Jordan and was a few years older than him in school. In fact, Will’s mother, the girls’ grandmother, still lives in a house that is just four doors down from us here in Frankfort! Also, you might remember when I blogged some photos and a video from the 50th birthday party of Jim Barnes and Heidi Church-Mahler back in September 2015; Heidi is Will’s sister, the girls’ aunt. The girls’ mother, Marijke, is originally from the Netherlands, and there is one more kid in the family, little brother Ezra, who is a riot. (Seriously, the kid cracks me up.)

Little did I know when I first met Maile and her family, but we actually have many friends in common with the Church family, and I’m somewhat surprised that we didn’t run into them earlier and/or more often than we did. (Apparently they came to one of our Halloween parties when Jordan and I first started dating almost a decade ago, for instance, but there were a lot of people there, so I don’t really remember it.)

Fortunately for us, I would say that we now consider them good friends, not just acquaintances, which is why I was ecstatic when Marijke asked me last spring if I would take Lauren’s senior portraits over the summer. Not only are Will and Marijke one of the best-looking couples that I know, they’ve produced some offspring with killer good looks, too. (Notable: Just a few days before our scheduled senior portrait photo shoot, I actually took some photos of both Lauren and Maile, as well as the rest of the 2016 Benzie Central varsity volleyball team.)

But not only is Lauren really pretty, as you can see in the photos below, she’s also super kind and generous and smart. For example, last year, when she was just a junior in high school, Lauren fundraised to go on a summer mission trip to Guatemala pretty much all by herself — sure, she met up with others once she got there, but she didn’t really travel with any friends or family from home. She just decided that this was something that she wanted to do, so she did it. That self-starter attitude is something that I’ve come to expect from Lauren: she is the president of Benzie Central’s chapter of the National Honor Society (NHS), and she is pretty sure that she wants to go into medicine, so she applied to colleges like Hope, the University of Michigan, John Hopkins, and Notre Dame. But the big reveal came in March, when Lauren found out that she had been accepted to Harvard, where she is now enrolled for next fall. And if brains and beauty weren’t enough, Lauren was voted by her classmates as both the Snowcoming Queen and the Prom Queen (not to mention that she was on the Homecoming court last fall), which, in my opinion, is a testament to how highly her peers think of her.

OK, enough gushing — the basic gist is that I know there are big things in store for Lauren’s future. She is already such a gracious young woman, and I’m so excited to see where her education pursuits take her!

Meanwhile, at the end of last summer, when I asked Lauren what kind of backdrop she wanted for her senior portrait session, she asked if we could actually do two portrait sessions: one with her horse, Sparkle, in an apple orchard just down the road from the Church’s home near Arcadia, and one at the Frankfort beach. Typically, I take about 250-500 total photos during a shoot, but we took nearly 900 photos at dusk alone, because horses are (living/breathing) props that don’t always do what they are supposed to, haha. Sparkle kept wanting to eat the grass, so we had to entice her to look up with some carrots and apples. Overall, she did pretty well, and we got some amazing shots. Then, Lauren was a trooper, because we got up the next morning before dawn to take about 500 more photos at the Frankfort beach.

Below you’ll find my favorite photos from the late evening shoot at the apple orchard, as well as the foggy morning at the beach in late August. 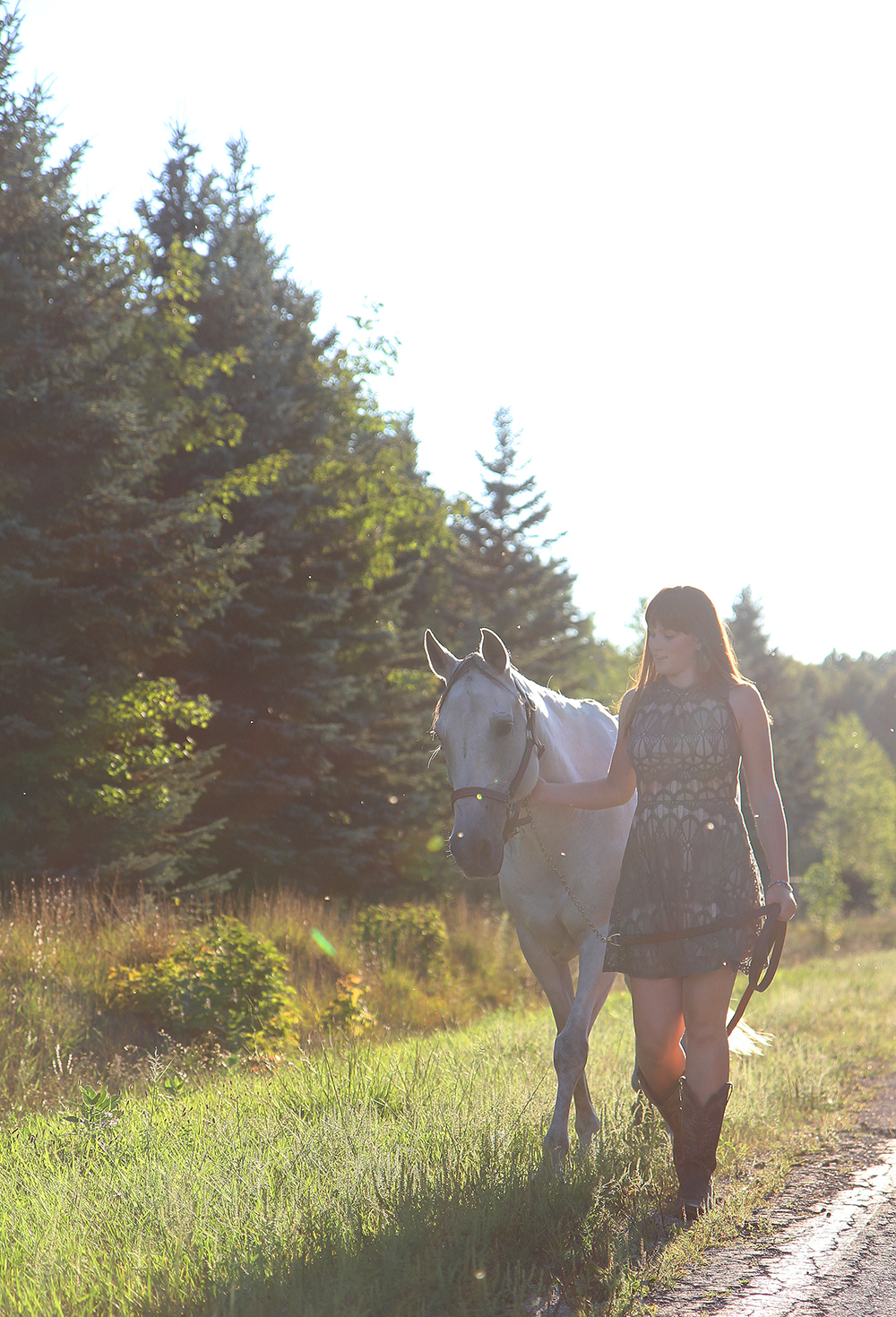 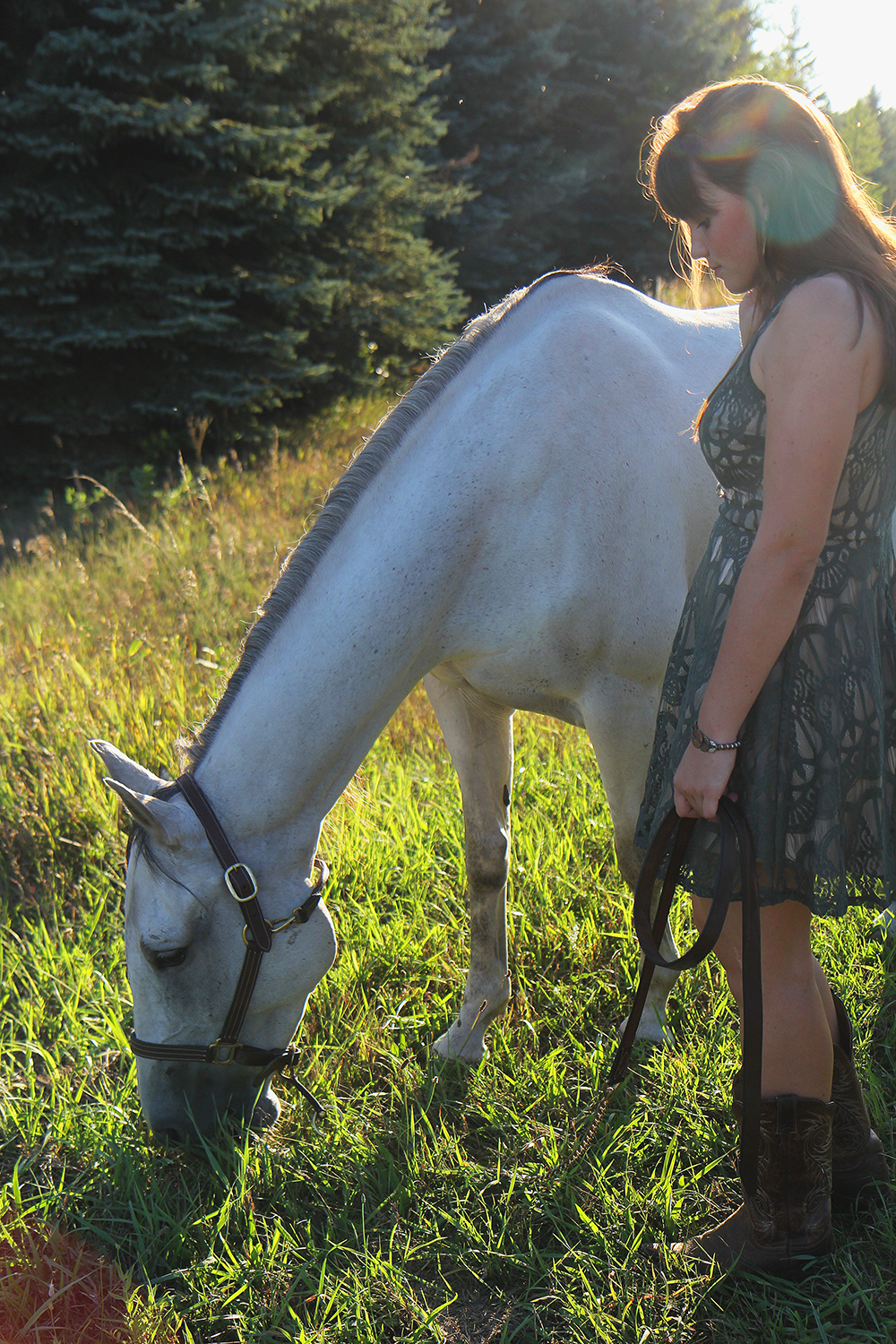 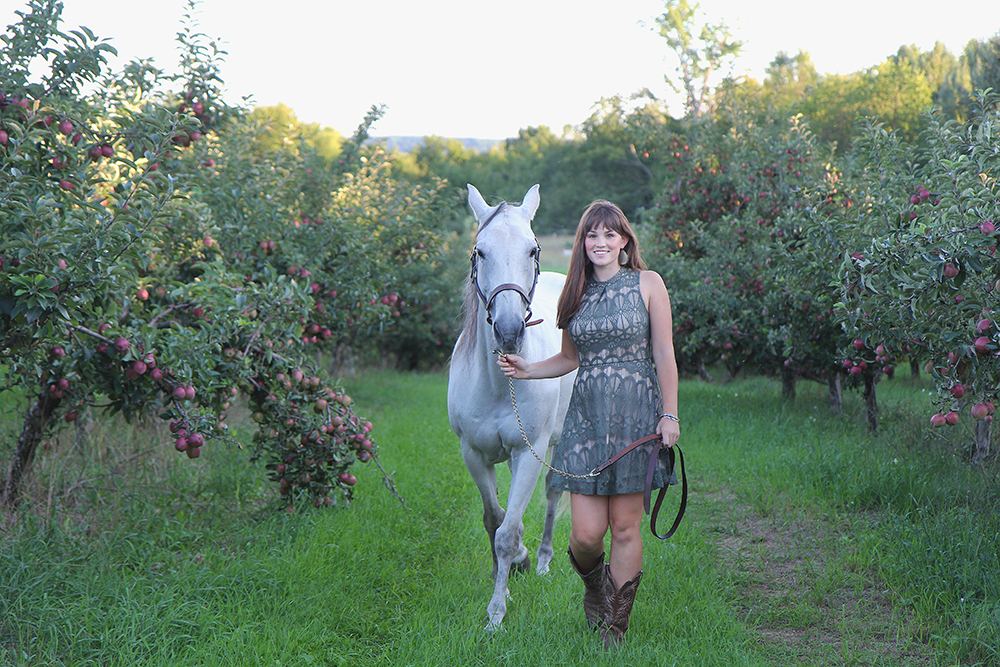 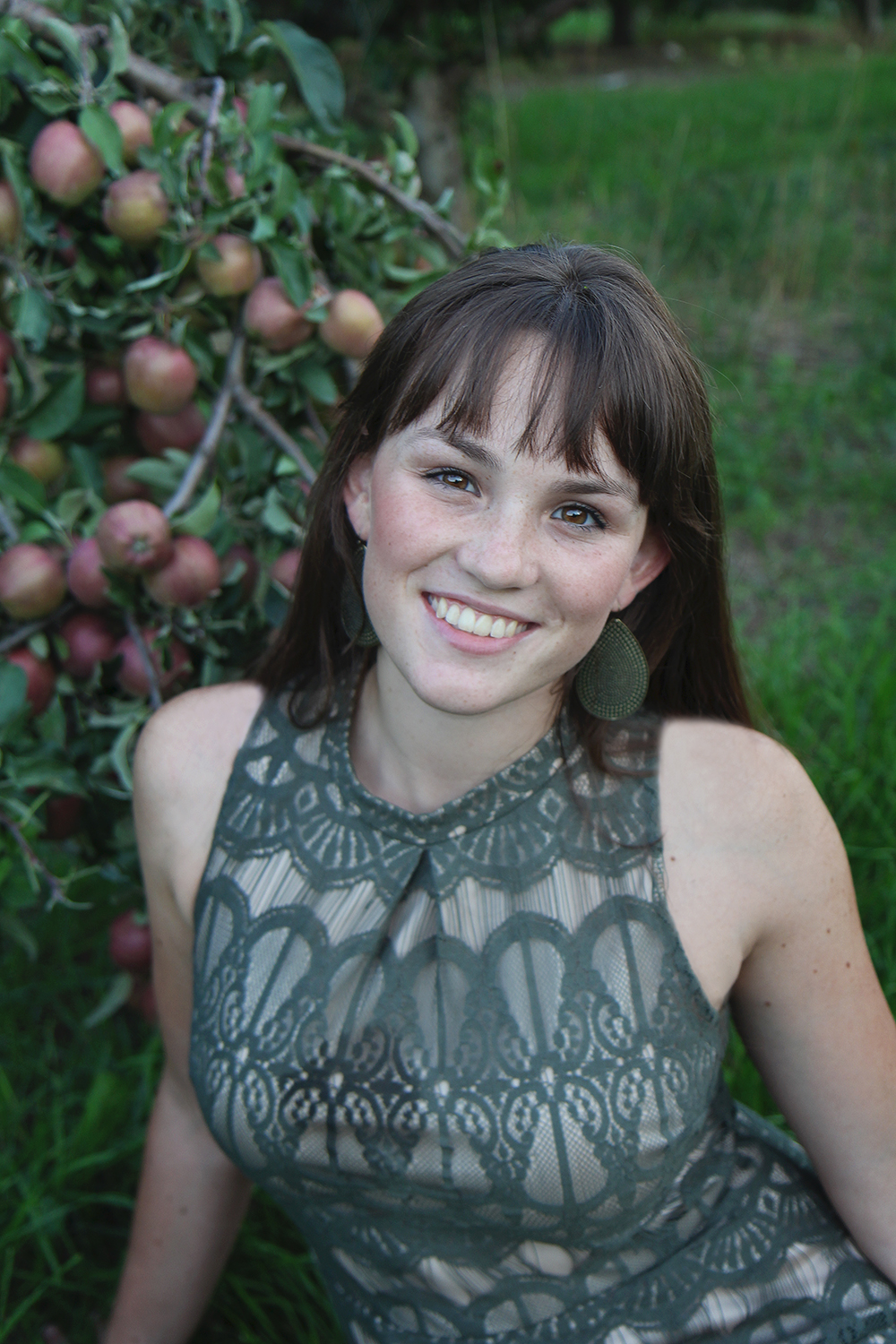 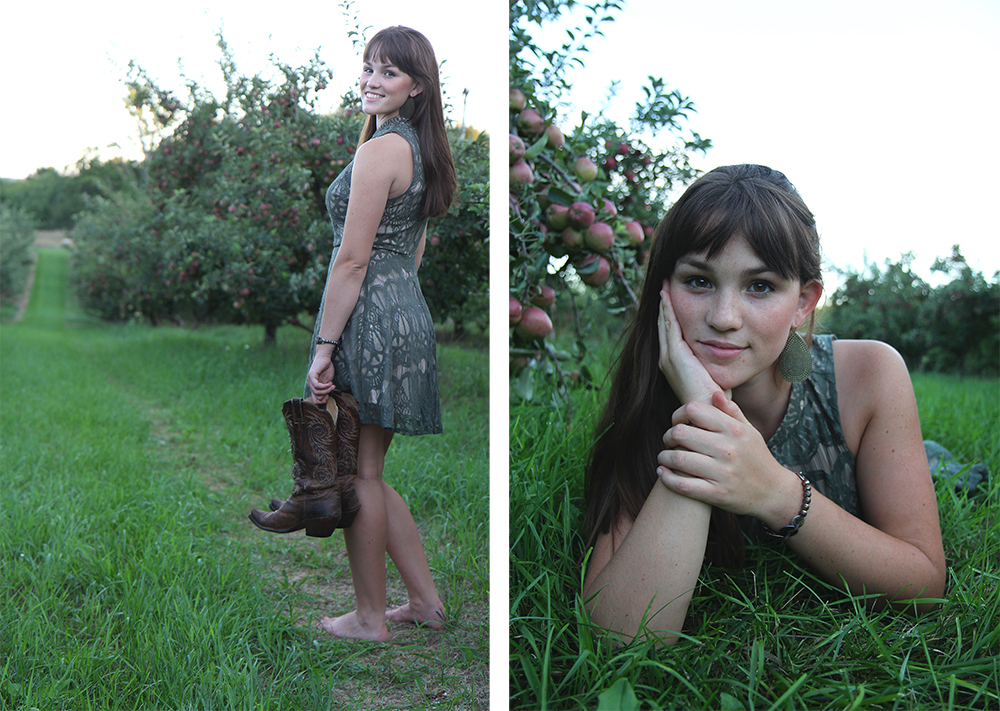 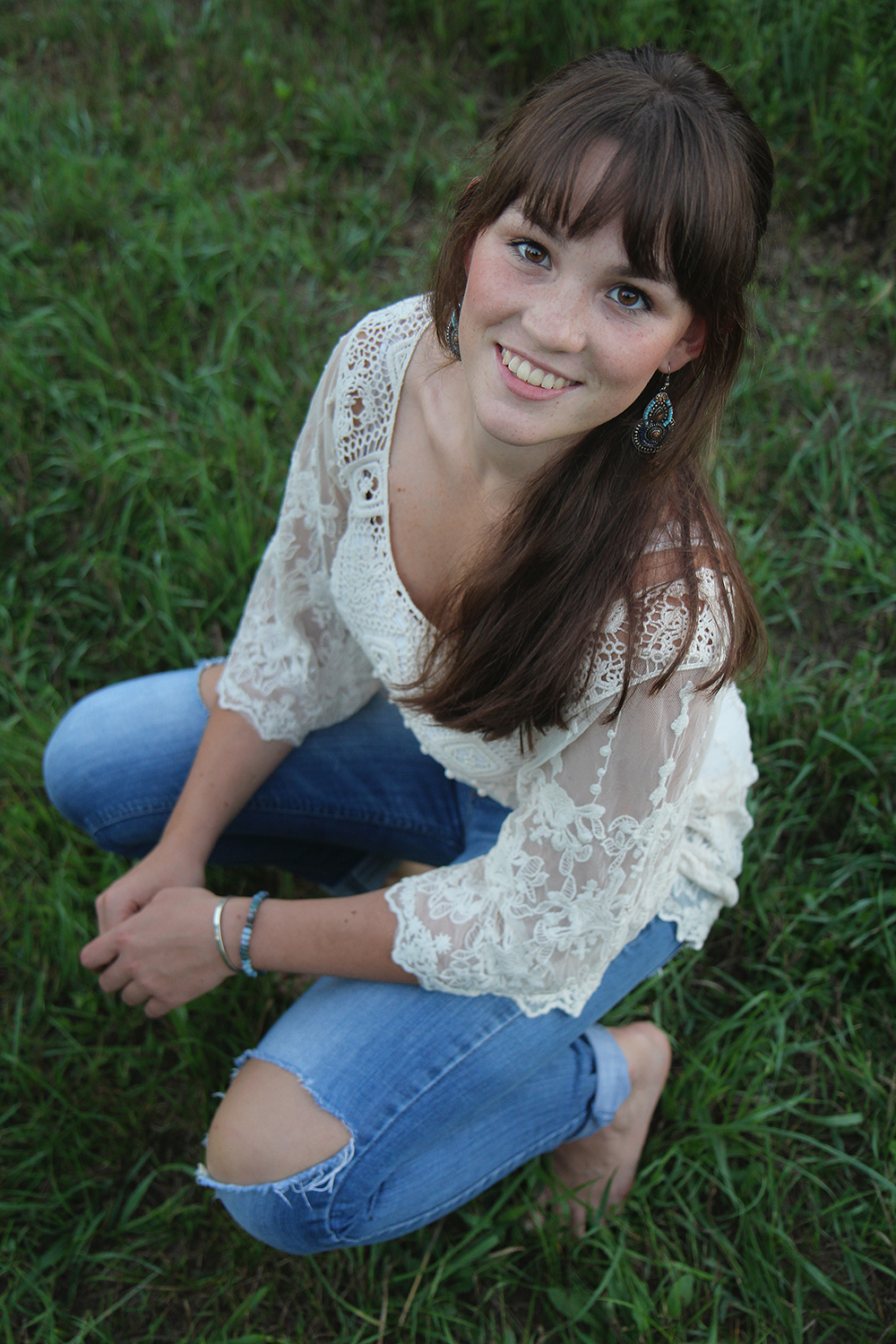 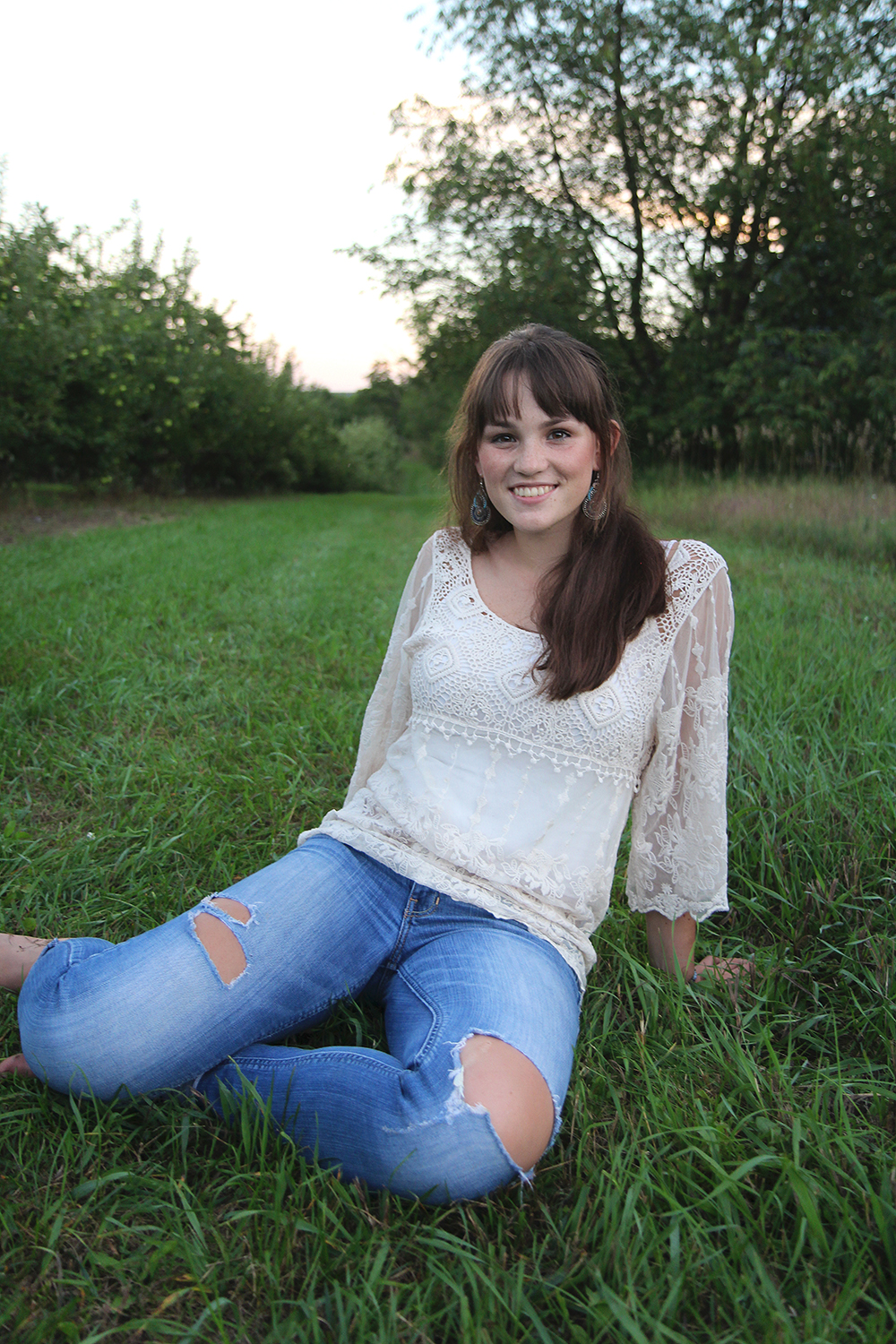 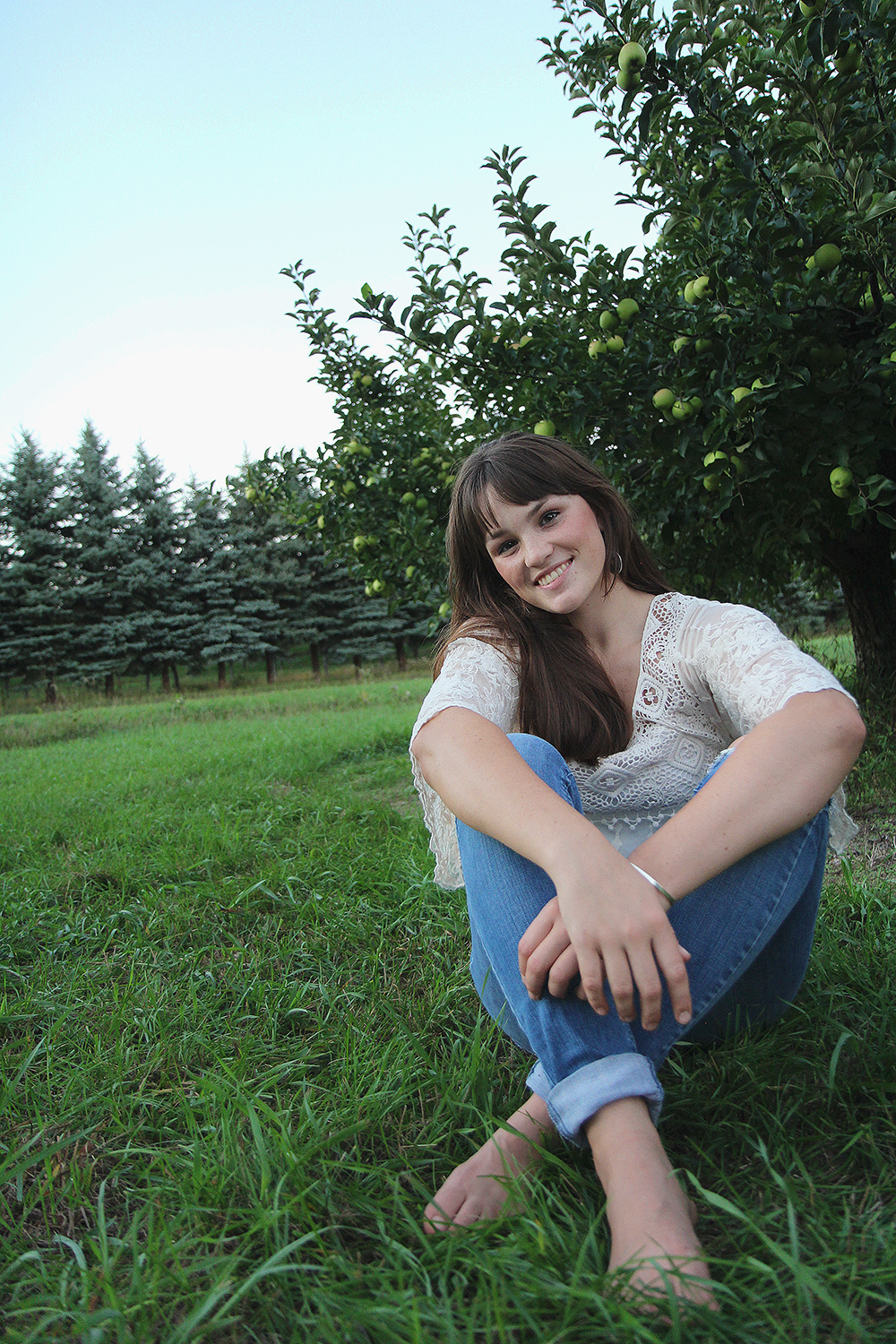 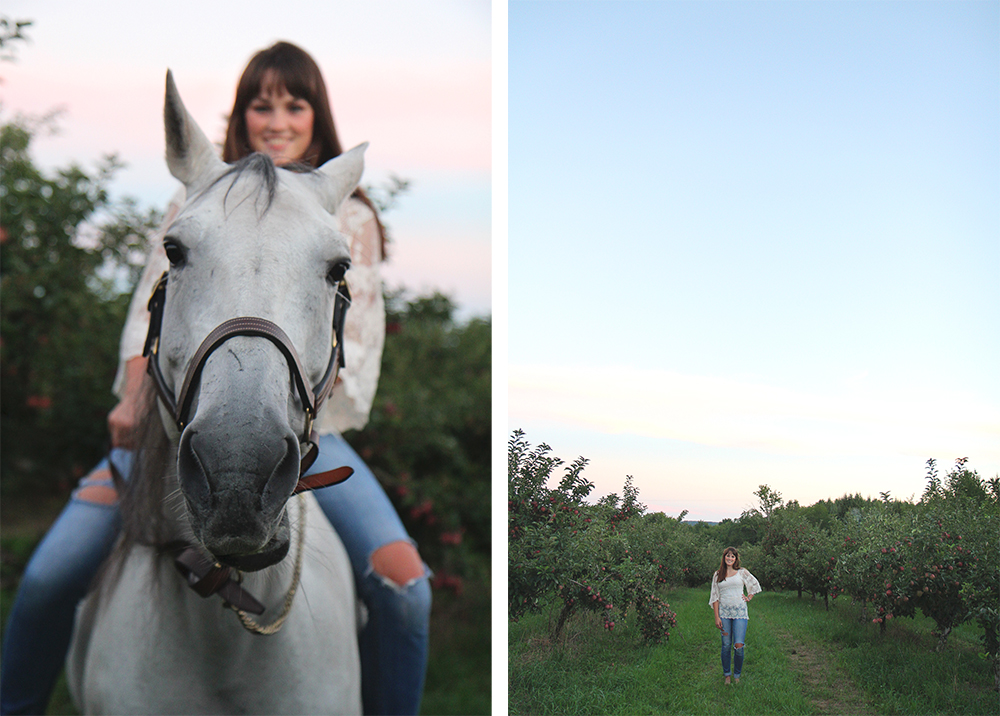 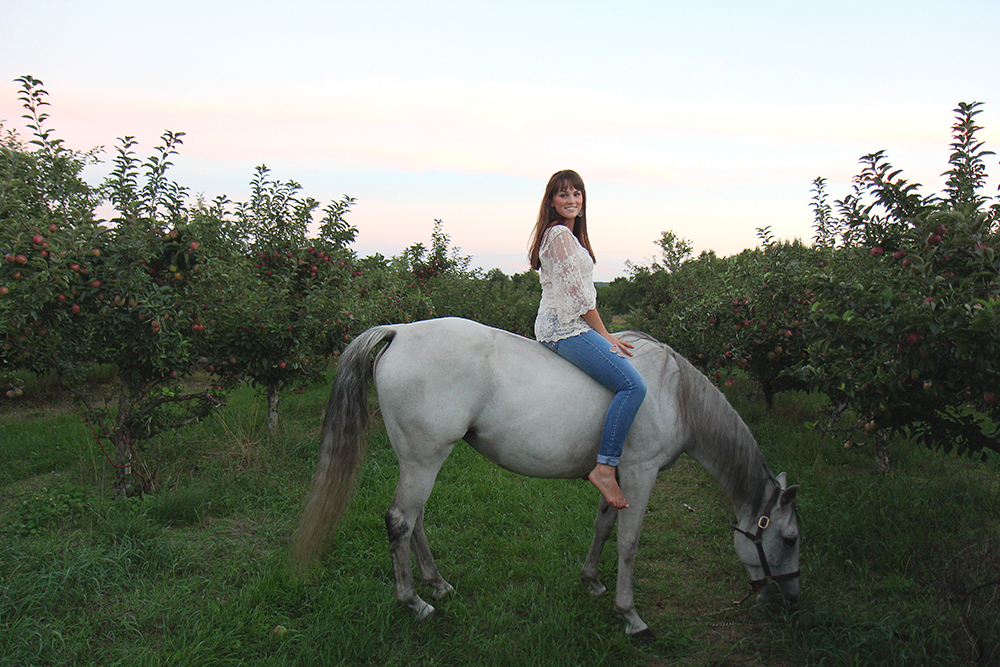 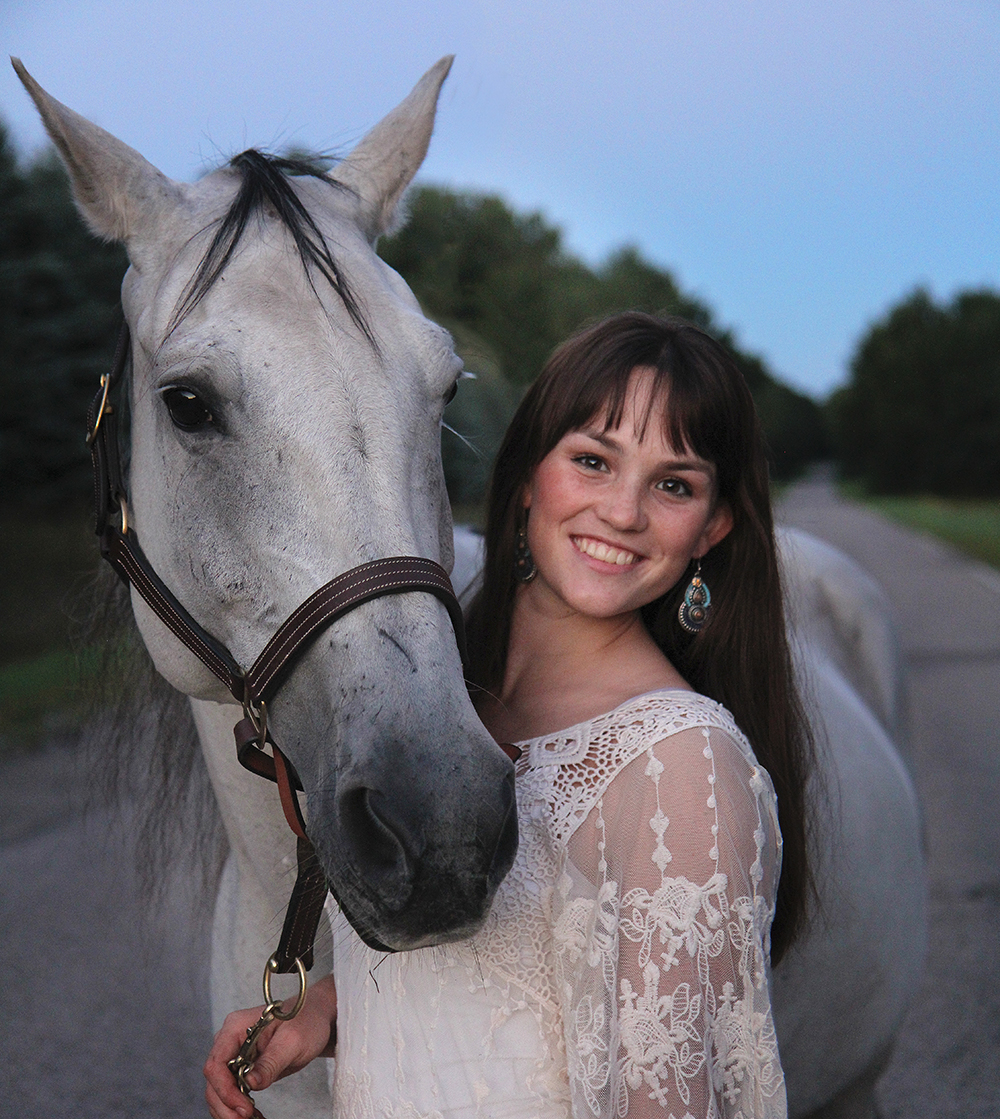 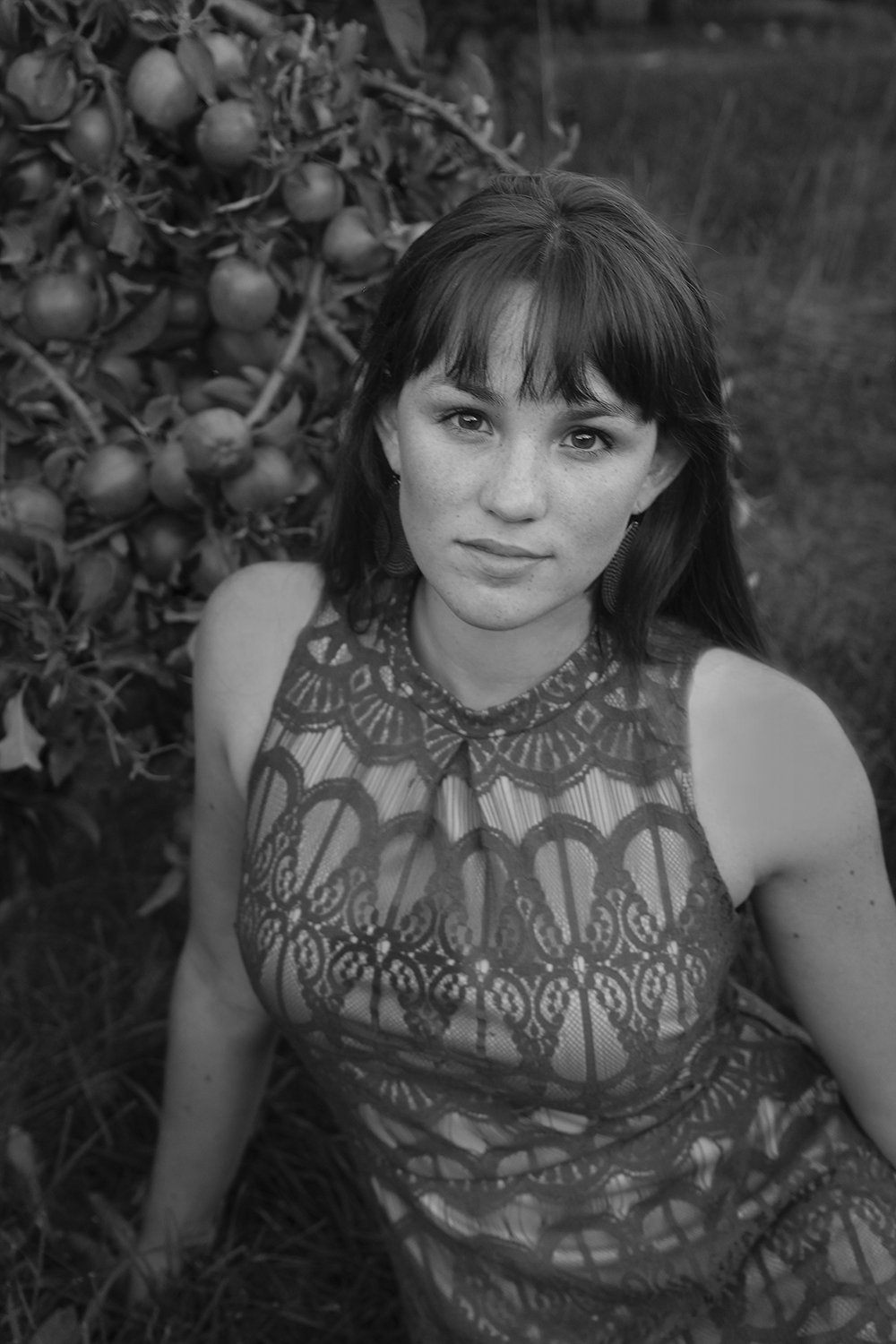 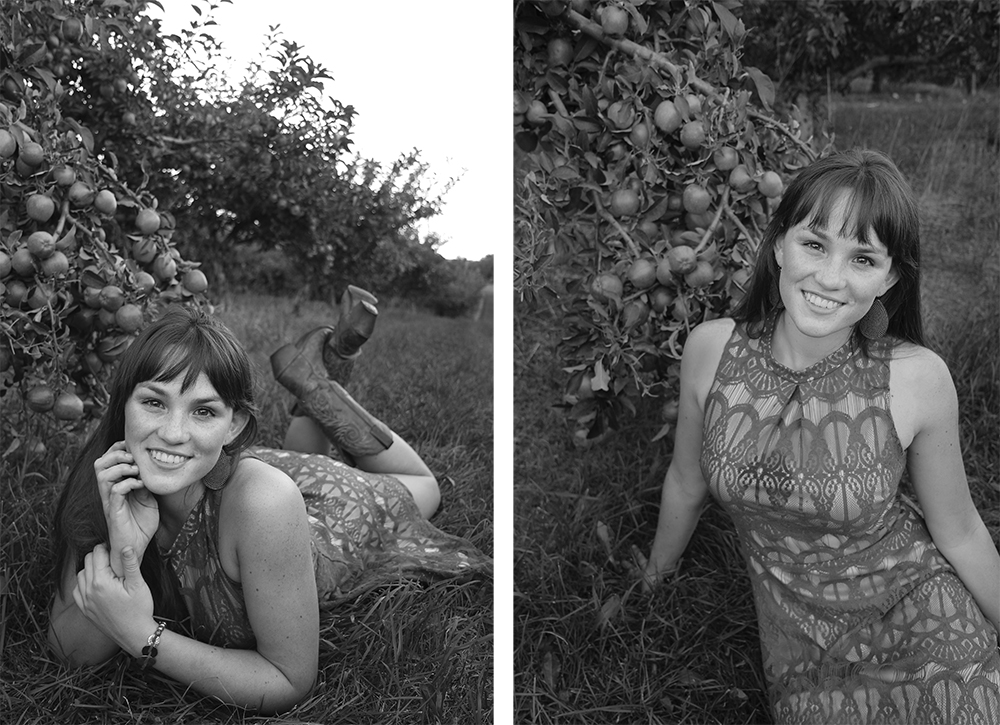 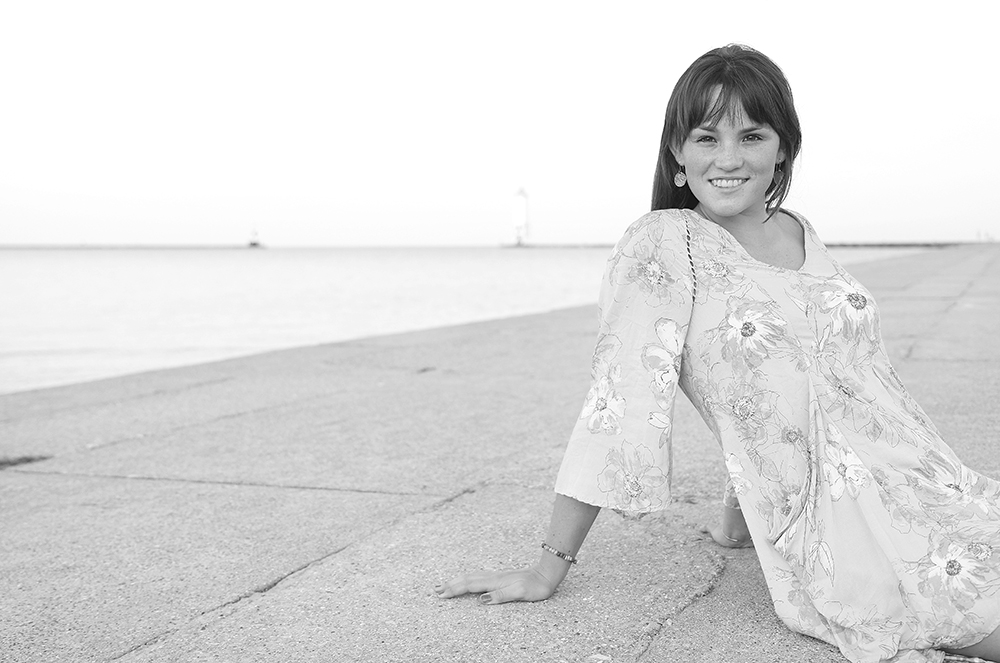 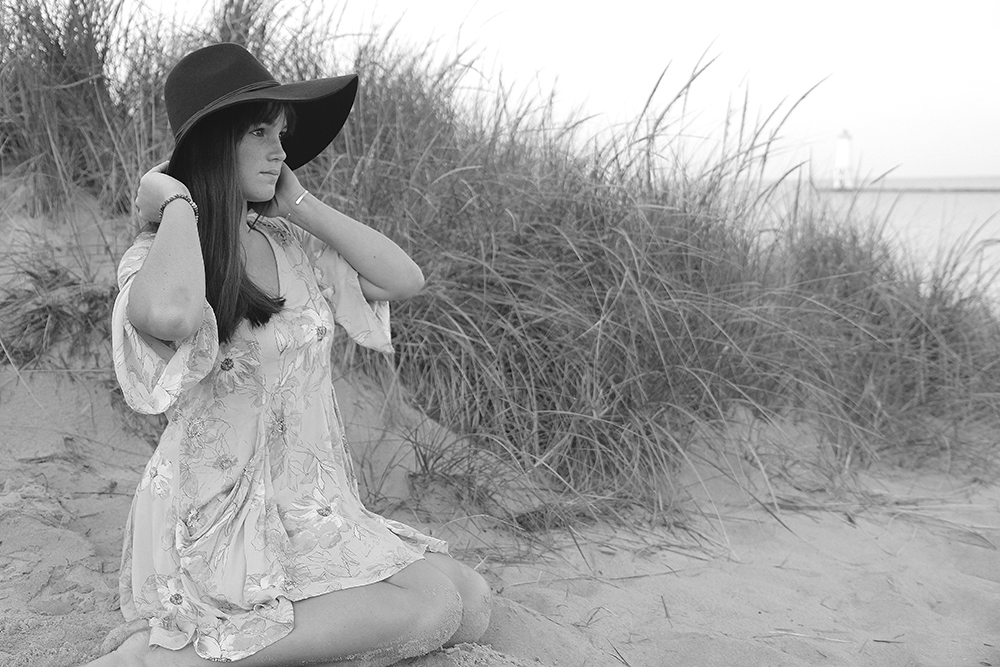 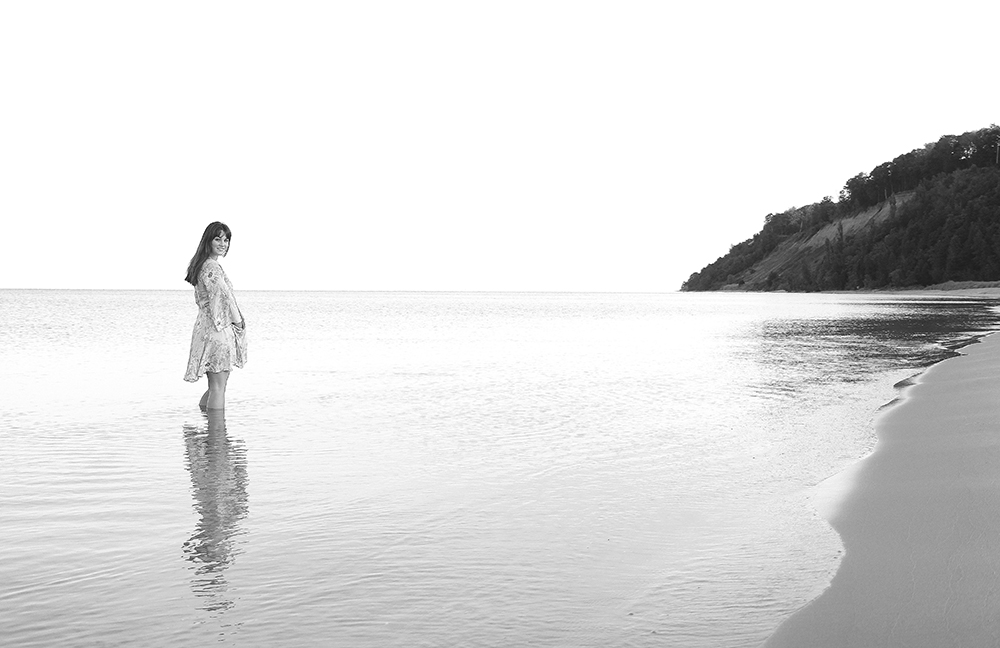 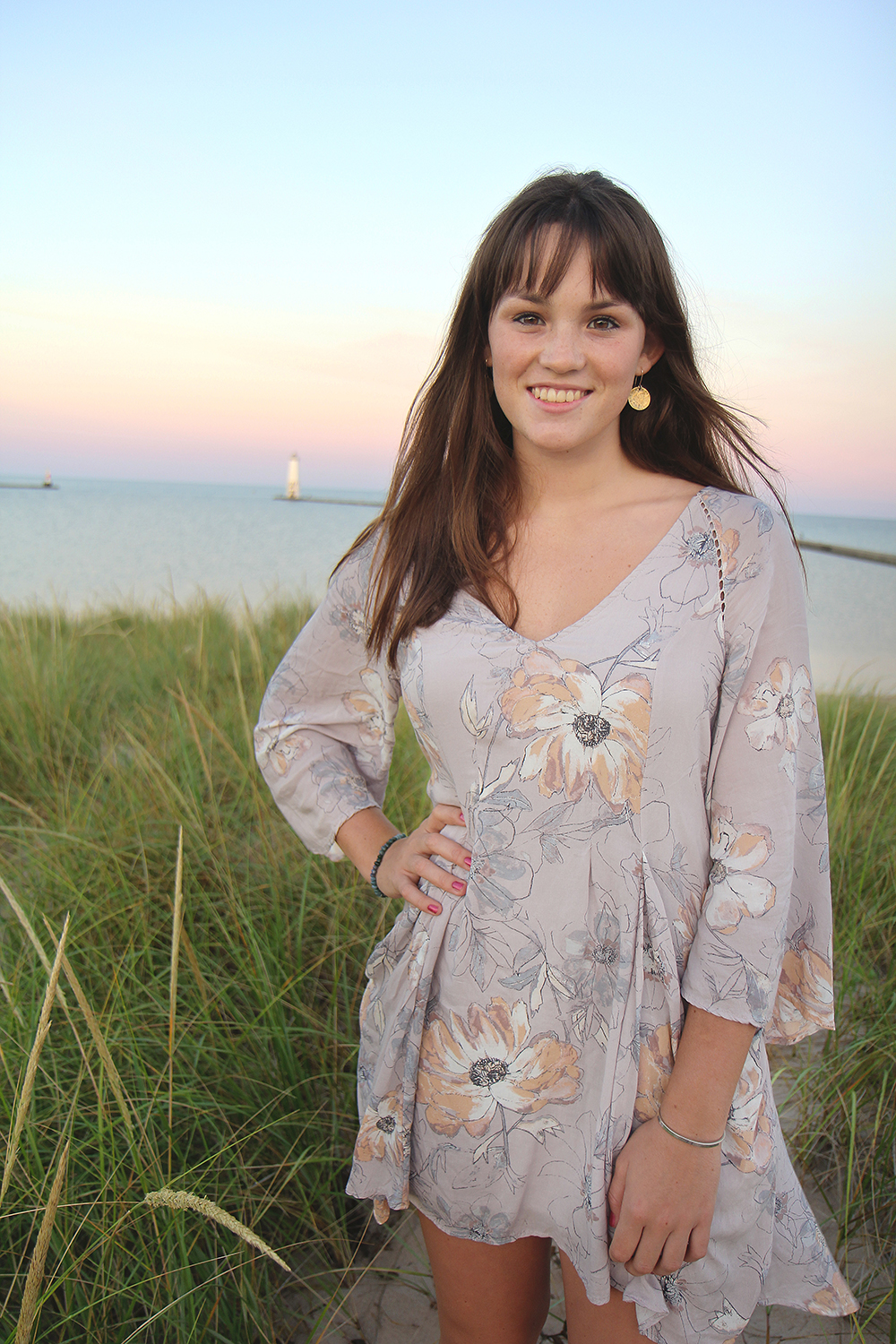 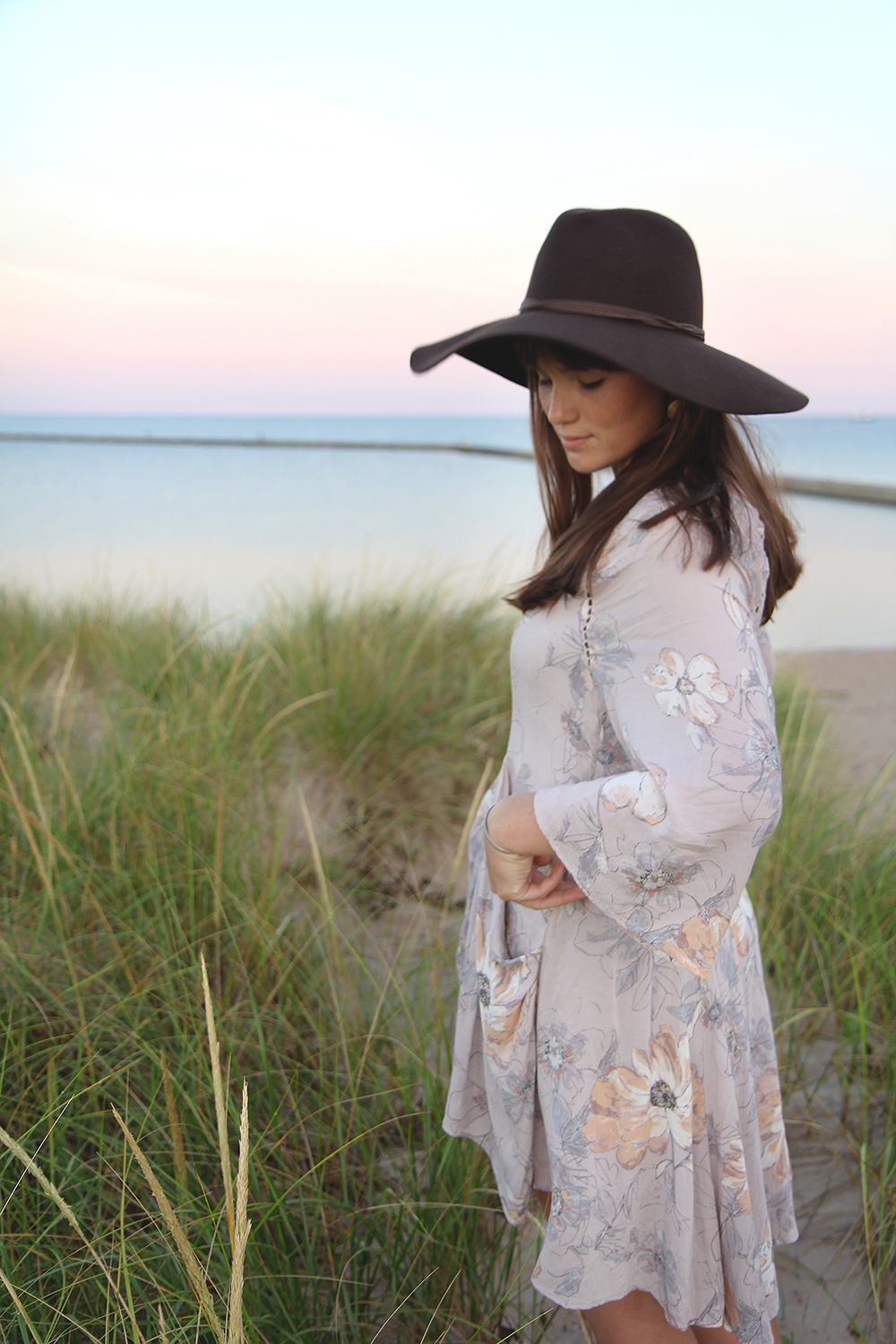 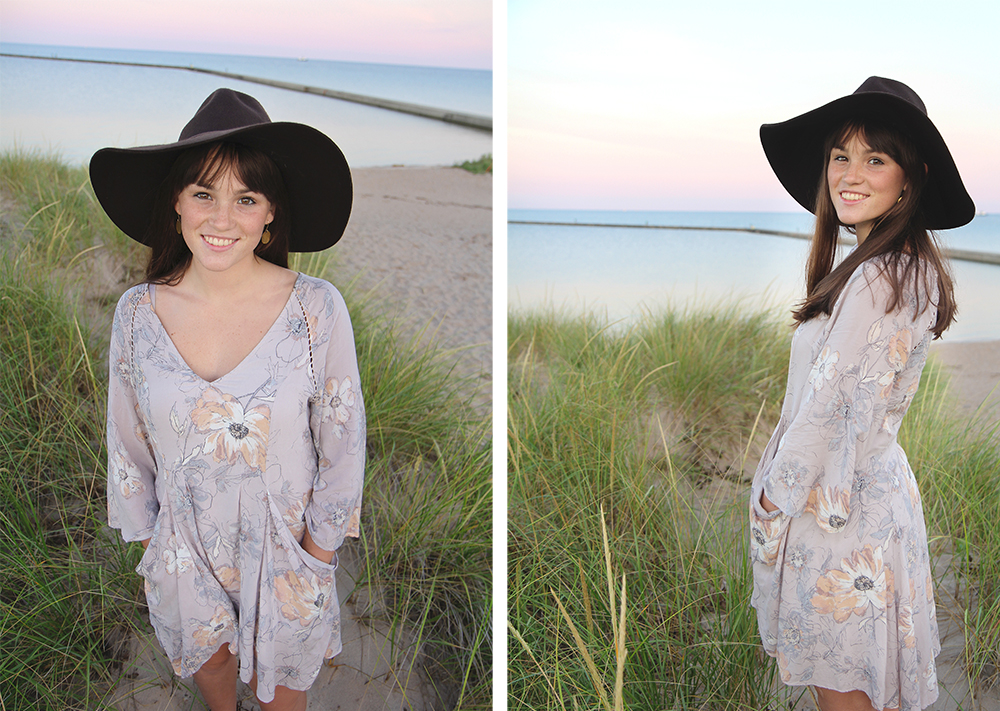 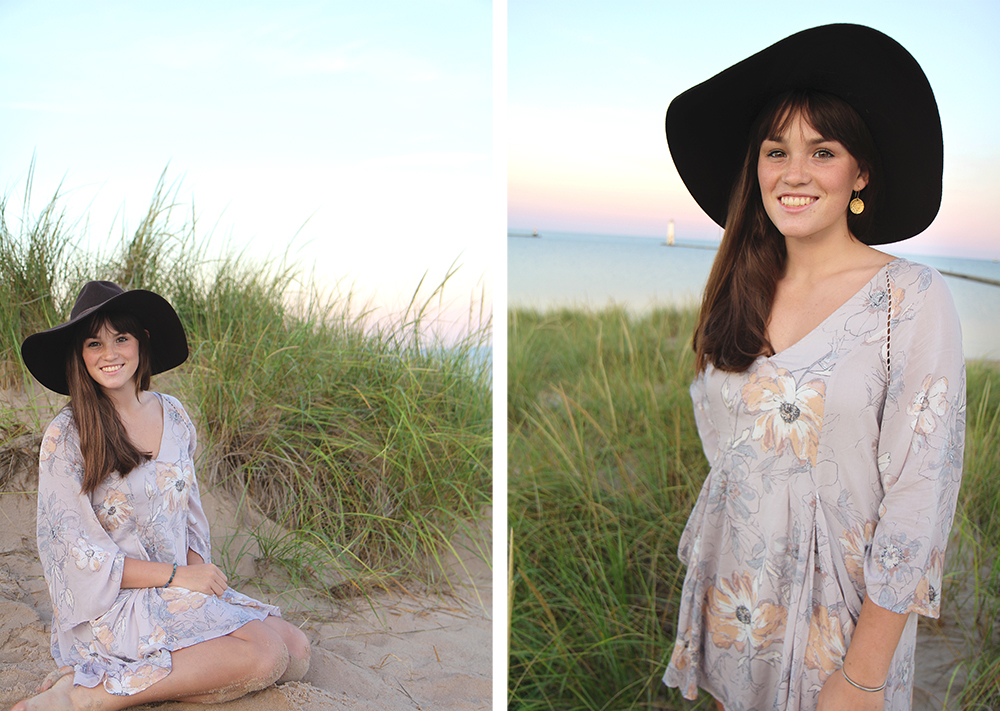 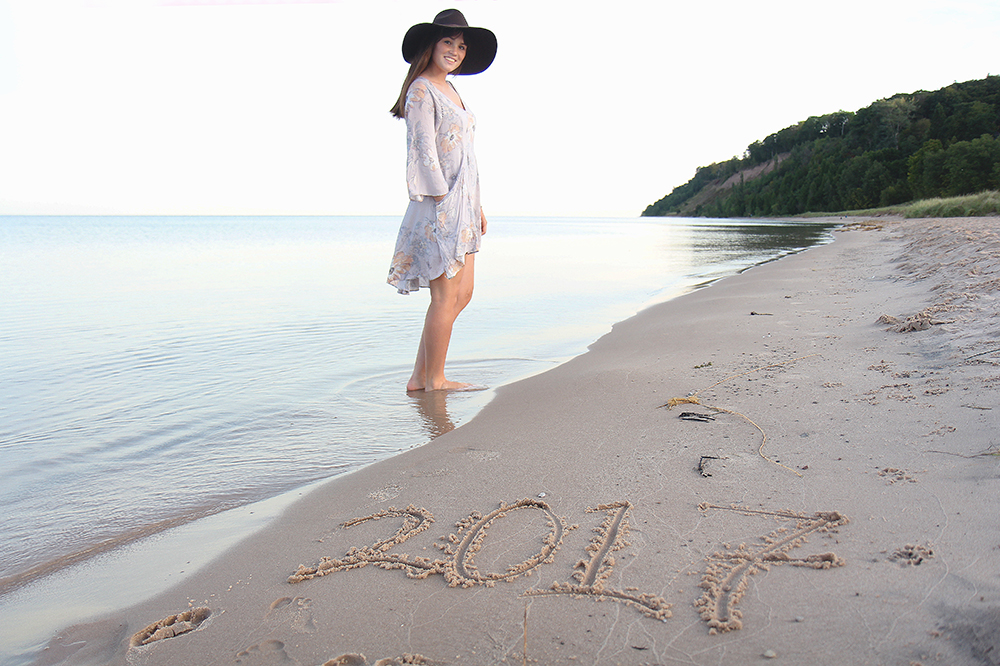 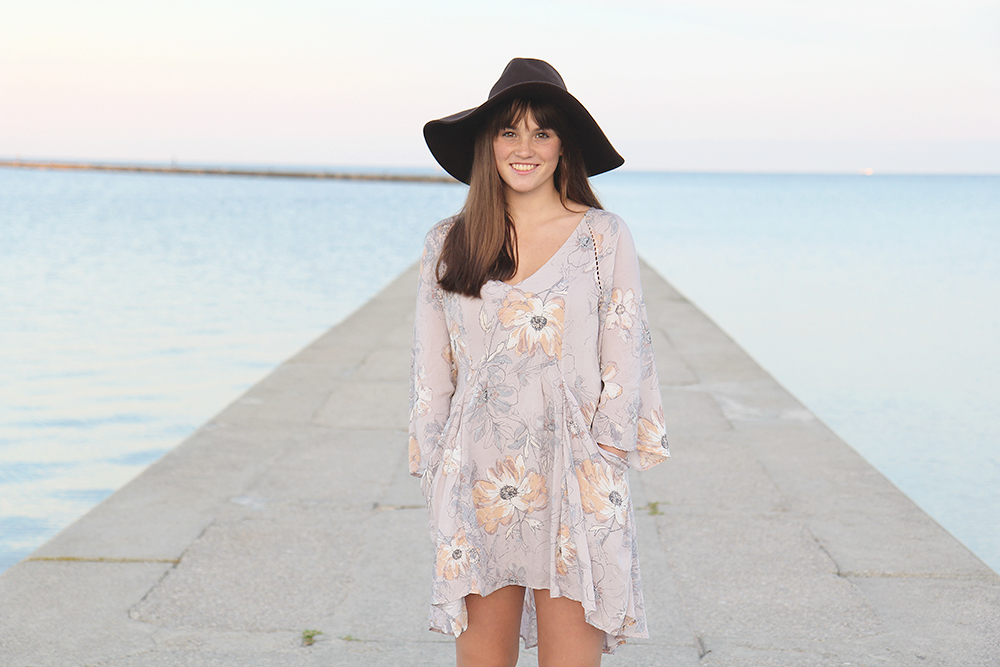 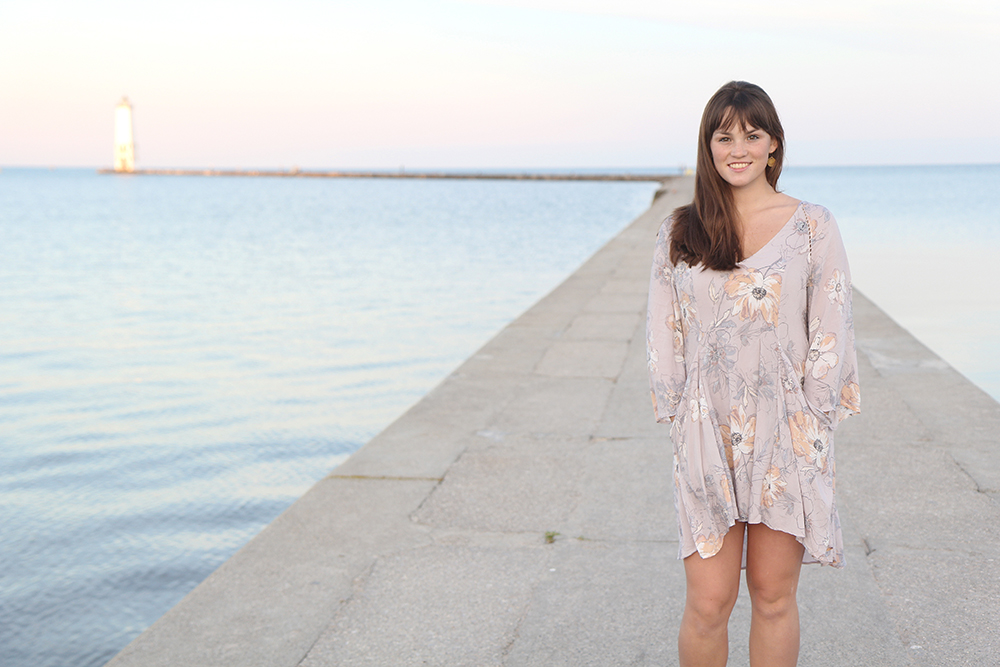 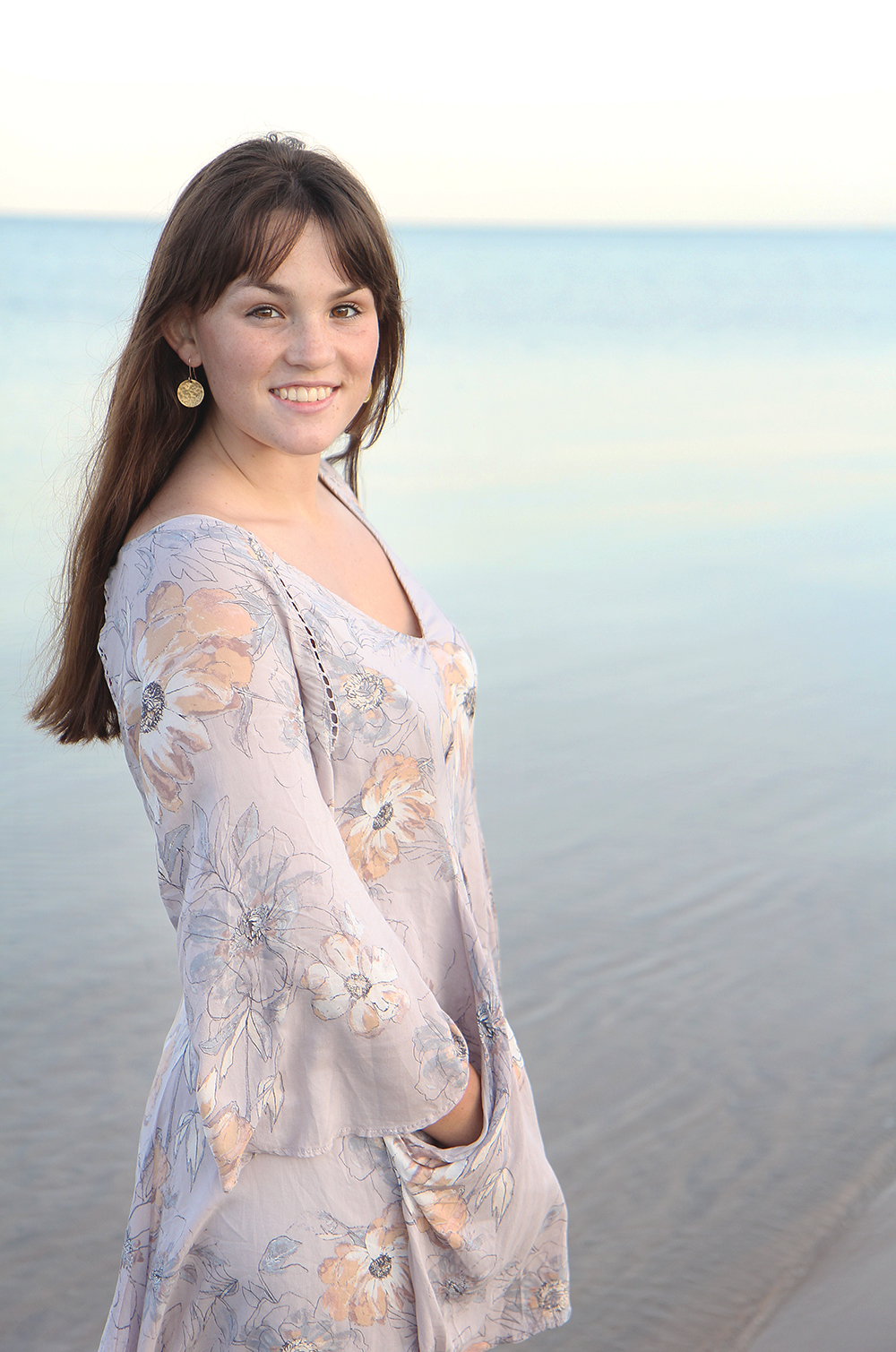 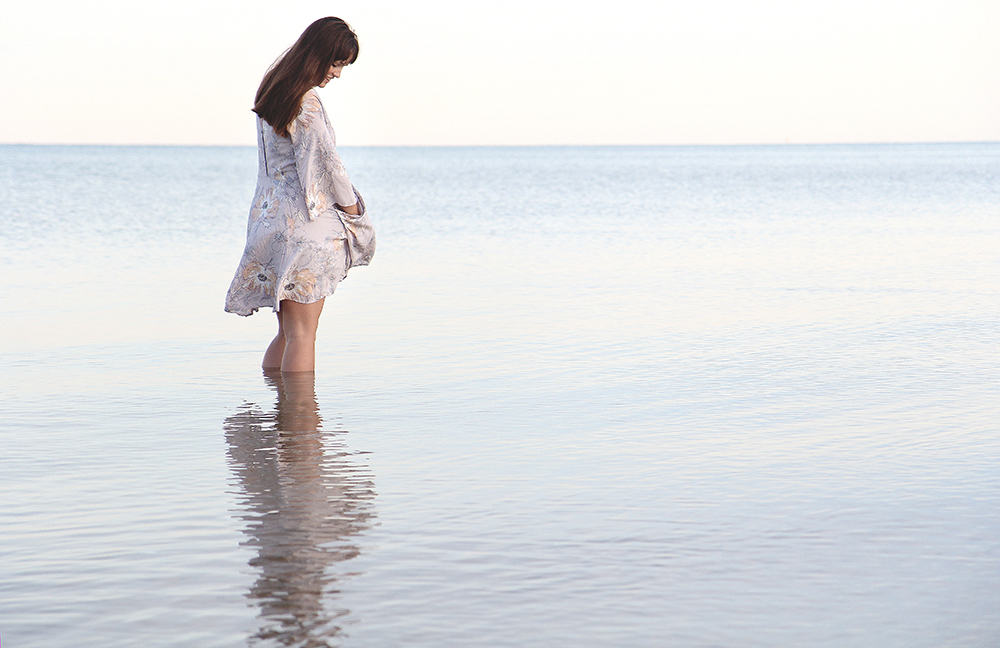